Yesterday Sir Peter Gluckman FRS FRSNZ was elected to the position of President-elect of the newly formed International Science Council at its inaugural meeting in Paris.

Sir Peter will hold the role of President-elect of the Council until 2021 and will then serve as President for three years until 2024.

"It was clear what great esteem Sir Peter is held in across the widest diversity of science disciplines and regions of the globe.

"This is the first time a New Zealander has held such an important and significant role in global science.  His election to this role is well-deserved. It is clear that the world appreciates his ongoing contributions, including his continuing leadership in the International Network of Government Science Advisers.”

"On behalf of the Society, I congratulate Sir Peter and we wish him well in this new and very significant role for New Zealand science."

Sir Peter Gluckman is New Zealand's science envoy and has served as New Zealand's Prime Minister's Chief Science Advisor for almost a decade until this week, when Professor Juliet Gerrard FRSNZ has taken over the role.

Sir Peter says the need for a stronger global voice for science has never been more apparent.

"Our world is becoming more fractured at the very time we need concerted efforts to address global and domestic issues. Technological and social changes create both challenges and opportunities for enhancing the environment, society and the economy.

"All knowledge disciplines and sciences ranging from basic/fundamental to stakeholder-engaged have critical roles to play: undertaking excellent research, building capacity and global collaboration, and communicating results and their implications to both society and policy makers.

"Yet our voice is not always clearly heard.   Scientists in all parts of the world must have the freedoms to operate to achieve lasting impact, while recognising that trust is key in the evolving relationship between science, society and policy-making. 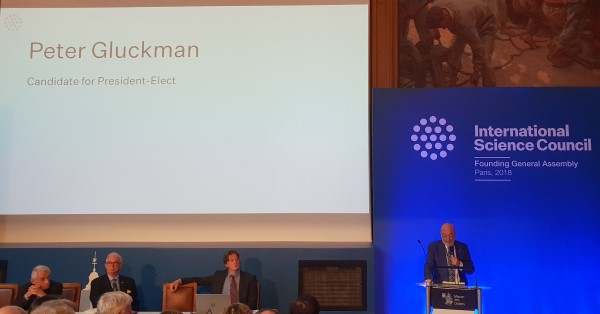 "As knowledge communities, we must look to ourselves, promoting inclusivity, diversity, equity, accessibility, ethical conduct, publication practices and outreach that strengthen trust and engagement with all sectors of society.

"The International Science Council can be the premier international science body — the persuasive, integrated voice for research-based knowledge while strengthening disciplines, national science communities, unions and associations to better contribute to a world that needs our knowledge."