Matt Boucher, a teacher at South Wellington Intermediate School (SWIS), says the Science Teaching Leadership Programme has inspired a learning programme around antibiotics back at school and has engendered some lasting links between himself, the school, and practising scientists at Wellington Hospital.

The Science Teaching Leadership Programme, run by the Royal Society Te Apārangi, provides opportunities for teachers to enhance their knowledge, improve their confidence in teaching science, and build links to scientists in the community and the organisations they work for.

As part of Matt’s participation in the programme recently, he spent terms 1 and 2 in 2017 following scientists around as they went about their work at the University of Otago’s Wellington campus, which is associated with Wellington Regional Hospital.

While following these professionals, he found he had a particular interest in microbiology. After attending meetings of the Infectious Diseases team, he met a couple of scientists who were passionate about the issues surrounding antibiotic resistance and have been working on ways to engage the public. Matt and the scientists realised that they had an opportunity to start getting the message out to the generation that will be making decisions in the future.

From there, Matt formed a close relationship with microbiologists at the university and together they came up with the idea of a poster competition as the outcome of a learning topic that focused on antibiotics and hygiene. 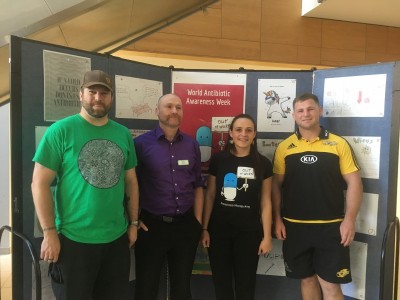 “We tried to boil it down to the main messages that are applicable to kids of that age. Because, you’re right, we’re talking about things like horizontal gene transfer, and that’s getting way too complex. We decided that the main messages that would help in the fight to preserve antibiotic efficacy would be hygiene, and stopping the spread of disease to begin with.

“We tell kids to wash their hands, but we wanted to really get into the why, and show them how germs spread from person to person. The other bit that we tried to get across is that antibiotics are only for certain illnesses.”

Part of that message was to get across the idea to young learners that the human body is an impressive machine, that has fantastic mechanisms for healing itself.

“Of course, we don’t want them to get the idea that they shouldn’t do what the doctor says, but we did want to communicate the idea that just because you’re sick, doesn’t necessarily mean that you need a medical intervention. A lot of the time you just need to take care of yourself and you’ll get better, and we wanted the kids to understand that.”

Matt and his new collaborators came up with some innovative ways to graphically demonstrate the mechanisms that influence the spread of illness. One involved the use of several slices of bread: one piece Matt handled with sterile gloves, before putting it in a sealed plastic bag. Another slice was subjected to washed hands, sealed up and attached to the wall where everybody could see it. And a third slice was passed around and touched by everybody in the class.

After a week, the glove-handled piece looked untouched; the one touched by Matt’s clean hands had some mould growing on it; and the third was “manky as”, says Matt.

Curriculum connections
Matt says that the unit he designed has connections to several aspects of curriculum, including:

“Basically,” says Matt, “I tried to help students learn about an authentic issue that affects their community and themselves. They then made recommendations for action to help solve the issue, and communicated these ideas through creative visual messages.”

The winners of the poster competition were taken on a trip to the hospital to see how the scientists go about their work. Chris Little is an infectious diseases specialist at Wellington Regional Hospital, and worked with Matt on the antibiotics learning theme and poster competition. Chris says that he and his colleagues are well aware of the fact that cultural change needs to involve generations that will be taking the lead in years to come.

“What we wanted to do with the poster competition was to get the kids to design messages that they understand.

“We’re battling antimicrobial resistance in the hospital, and we’ve realised that community is where the big wins are, and where the real issues are. We thought, ‘how can we best influence things?’, and we realised that if we can start to educate children about the real basics, like washing hands and cleaning wounds, then we’d have made a good start to improving health literacy in the community.

“Cultural change takes a massive amount of work, but if we don’t start then nothing will happen.”

The Science Teaching Leadership Programme is funded by the Ministry of Business, Innovation and Enterprise, and administered by the Royal Society Te Aparāngi of New Zealand.