An ACG Parnell College teacher who spent two terms practising hands-on science at NIWA is shaking up science lessons at the school.

ACG Parnell College is currently participating in the Science Teaching Leadership Programme with Michael Breckell as the participant teacher who is taking a leadership role in science. The programme is funded by the New Zealand Government and administered by the Royal Society Te Apārangi

It sees teachers take leave from their teaching roles to work for six months in science organisations within their communities. Once back at school, they aim to use what they’ve learnt to improve science teaching and student learning. 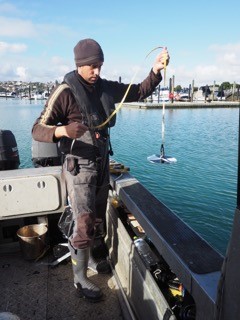 As part of his time with NIWA’s fisheries group, Mr Breckell spent time in and around the Hauraki Gulf collecting data for a port survey on invasive species in the area.

During his placement with NIWA, Mr Breckell was involved in using micro-computing to design and build air quality test kits, and worked closely with the fisheries group, where he collected raw data for a Kahawai monitoring program. 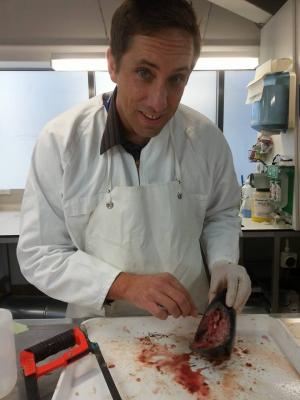 While working with the fisheries group, Mr Breckell honed his dissection skills by cutting Kahawai heads to obtain the otoliths – small bones sometimes called fish ears - to age the fish. He called the work “messy but interesting!”

For him, the end goal was to make science more engaging for his students and encourage them to consider it as a possible career.

“The risk to teaching science solely by textbook is that you lose sight of the subject as a process and a skill that can change how the world works. I wanted to connect with practising scientists, observe how science operates in the real world, and take that learning back to our students.”

Since his return to the classroom, the ACG Parnell College Science Faculty has undertaken an evidence-based review and introduced three new initiatives based on the results to make Science more relevant.

Year 7 Science students took two weeks out of the normal curriculum to participate in the Science Fair, which saw them come up with an idea, develop an experiment around it, do an investigation, gather data and present their findings. When parents came to see their children’s work, the room was full for two hours.

Year 9 students were assessed on the design and construction of a solar oven instead of sitting the usual test for their energy unit. “A big part of science is creativity and problem solving,” Mr Breckell explained. “It was fantastic to see what they came up with.”

And, after the examinations in term four, Year 10 students chose a controversial scientific issue to research, engaging with industry scientists on topics like genetics, evolution and climate change to get their views.

Although the changes to the curriculum require balance - students still need theoretical content – space does need to be made for students’ own enquiries and experimentation, Mr Breckell said.

“We’re trying to be more inquisitive and relevant in our approach. We want students to have opportunities to explore their own ideas, think critically about the process of science and understand how new knowledge is formed,” he said.

And the changes are capturing attention – recently the Royal Society Te Apārangi led eight teachers around the science department as an example of strong science leadership.

The Science Teaching Leadership Programme is funded by the New Zealand Government and administered by the Royal Society Te Apārangi.