2018 Rutherford Medallist Professor Rod Downey FRSNZ on how we are living in the most mathematical age of all time, because of computers. This 2019 NZ Rutherford Lecture was presented in Auckland, Palmerston North, Wellington, Dunedin and Christchurch.

Massive computational power at our disposal has driven innovation in all aspects of modern society such as science, medicine, and social development. Mobile phones, internet, GPS, online shopping, banking are commonplace examples, but there’s also medical imaging, data mining, even non-skid braking on vehicles – the impact of computing is extraordinary.

A main contributor to the evolution of computing power is a branch of mathematics called Logic. But what is Logic and how does this type of reasoning contribute to advancing technology?

Rod Downey, Professor of Mathematics at Victoria University of Wellington, chronicles the story of Logic, beginning with the ancient Greeks, then onward to some of the deepest and most important issues of modern mathematics and computing – what can we compute and what can’t we compute and why? For instance, ‘NP-complete problems’ can be solved in theory, but are deemed intractable because we actually think solving them would take longer than the life of the universe. On the other hand, there is no (mathematical) proof of this belief – yet. As one of the seven Millennium Prize Problems set by the Clay Mathematics Institute, finding a proof, could earn you $US one million dollars. Rod has developed an approach that shows this intractability can be sidestepped in many practical problems. Does this have an effect on society? How close are we to understanding intractability in practice? 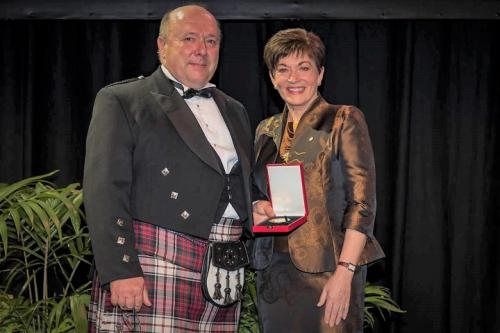 Professor Rod Downey being awarded the Rutherford Medal by the Governor-General of New Zealand, Her Excellency Dame Patsy Reddy, at 2018 Research Honours Aotearoa

In 2018, mathematician Professor Rod Downey FRSNZ was awarded Royal Society Te Apārangi’s highest honour, the Rutherford Medal for his revolutionary research into computability, including development of the theory of parameterised complexity and the algorithmic study of randomness. In 2016, he received the Humboldt Research Award and in 2017 he was the first logician from outside Europe/North America to deliver the Gödel Lecture for the Association for Symbolic Logic.

Ahead of this national lecture tour, Rod Downey also sat down to chat with Kathryn Ryan on RNZ's Nine to Noon: The computer says yes: Logic, algorithms & society