Winning idea at Taiwan International Science Fair to be patented

Cian Hinton is patenting his electrical generator design after winning the Environmental Engineering category of the Taiwan International Science Fair that he attended earlier this year after being selected by Royal Society Te Apārangi.

Cheap power sounds like a wonderful lofty, dream, but an 18-year-old is currently patenting something which could achieve just that.

The model could generate power from water and was a fully functional prototype.

"This is a completely new [design] concept that has not been explored yet and as an aspiring engineer, this is exactly the sort of thing that I wish to explore."

He proved his idea worked in regards to hydro-power and proved it could be adapted to any environment or element to work.

His design aimed to create a cheap source of electricity which could be adapted to any environment or situation.

He would love to see it provide universal access to electricity in third world countries for use in medical care and communication.

Hinton said the success of the final prototype came down to chance: "It just happened to work."

Don't be fooled by the word chance, which could make it sound quick and easy. The prototype, a five-year process he started when he was 13, was anything but.

His win left him "mainly surprised and proud as I personally thought that the other projects were at a higher level".

But Hinton has taken his win a step further and is in the process of patenting his idea. 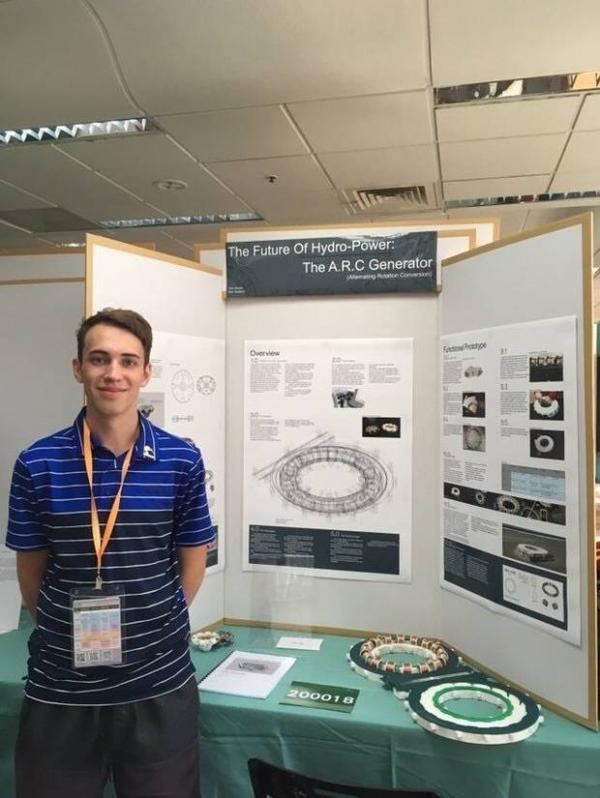 Cian Hinton is patenting his design after winning the Environmental Engineering category of the Taiwan International Science Fair which took place earlier this year.

John Paul College science teacher Tim Bell said it was fantastic to see Hinton, a former student, getting recognition for his passion and hard work.

Bell was Hinton's science and physics teacher, supported the young inventor throughout the process and bounced ideas around.

"It has been great over the years to be involved in all sorts of mad ideas and projects with Cian, but I know this project in particular has been a labour of love for him."

While it was still early days, he said he would love to see the invention provide universal access to electricity in third world countries for use in medical care and communication.

For now, the Benjamin Franklin of Rotorua has moved to Christchurch to begin his first year at the Canterbury University where he will study engineering focusing on mechatronics.

The fair had 90 students from 21 countries, with 15 projects in his category.

Hinton was also invited to another event, the I-FEST in Tunisia, which he could not attend for personal reasons.

The Talented School Students Travel Award is managed by Royal Society Te Apārangi and funded by the Ministry of Business, Innovation and Employment.