Associate Professor Nick Golledge from the Antarctic Research Centre at Victoria University of Wellington focusses his research projects on numerical models to simulate the Antarctic ice sheet both at the continental scale and at the scale of individual outlet glaciers.

His interests lie in understanding how the ice sheet responds to changes in climate, and to do that he uses geological evidence of past changes together with a process understanding of the modern system.

Q: Can you elaborate on how the Antarctic ice sheet can help us to understand climate change?

A: When we study the Antarctic ice sheet, we’re primarily concerned with the aspects of its behaviour that lead to either its growth or decay, over a range of timescales from decades to thousands of years. Observing and directly measuring these trends, or interpreting changes from the geological record, gives us data that can be used to evaluate and improve the performance of our numerical models. And it is these models that tell us how the ice sheet might evolve under a future climate warmed by anthropogenic greenhouse gas emissions. 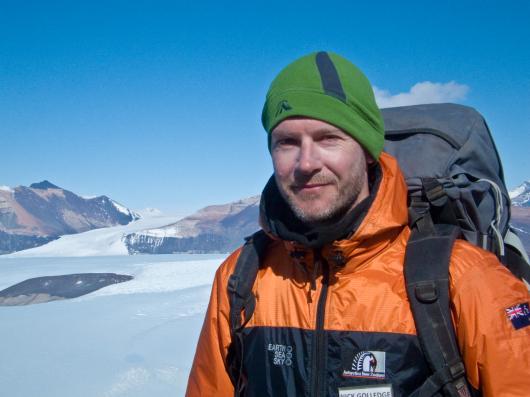 Nick in the McMurdo Dry Valleys, above Taylor Glacier, Antarctica, 2014

Q:  How do ice sheet responses in the past differ to more recent ones? Have they been melting at an accelerated rate?

A: Current climate warming is taking place ten times faster than it did at the end of the last ice age – a period that we think of as one of rapid environmental change. We know that during that episode - the ‘glacial termination’ – the Earth experienced widespread changes not just in terms of climate and sea level but also in terms of marine and terrestrial ecosystems. The rapidly changing climate influenced human population dispersal and interactions, and led to extinctions of flora and fauna.

But how the Antarctic ice sheet will evolve under even more rapidly changing environmental conditions is an area of great uncertainty – we just don’t have evidence of anything similar in the past to guide our projections. But we do know that the Antarctic ice sheet is surprisingly sensitive to global mean temperature changes of even just a degree or two, so we know that it is imperative to limit future warming as much as possible.

A: We know that ice sheets are part of a complex Earth system in which tipping points may lead to cascading positive feedback loops. An example of this is how ice sheet melting leads to changes in ocean stratification - the water masses become more layered. When this happens, warm water that normally rises to the surface and cools instead remains at depth, and spreads laterally, increasing the basal melting of ice shelves. This increased melt further maintains the stratification. By disrupting ocean mixing in this way, ice sheet melt leads to global changes in the climate. Some areas cool, but others warm. In particular, it seems that ice sheet melt leads to enhanced warming in the Arctic, which would in turn lead to reduction in sea ice extent, thawing of permafrost, or decrease in snow cover.

Each of these changes leads to further warming of the global climate, leading to further ice sheet melt, and so on. 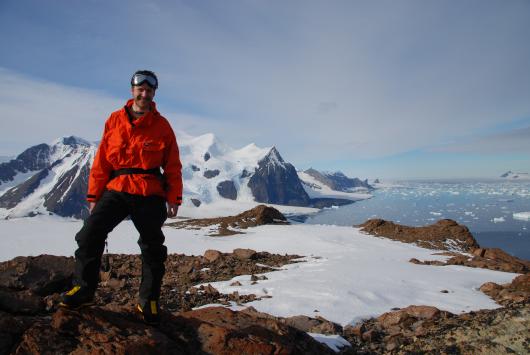 Q:  Why is ice sheet loss so significant?

A: Our primary concern is that melting of the Antarctic ice sheet will lead to rising global sea level. In total, the ice sheet contains enough fresh water to raise global sea levels by around 60 metres, but even a small fraction of this would have significant impacts worldwide. Around 10% of the world’s population live in the coastal zone less than 10 metres above present sea level, and with projections suggesting up to a metre of sea level rise by 2100 on current emissions trajectories, there is a clear societal need to reduce our emissions as quickly as possible.

Even without positive feedback loops, we know that there are sectors of the Antarctic ice sheet that are so delicately balanced that once disturbed, they can continue retreating (and contributing to sea level) for many thousands of years before they can stabilise themselves.

Q: Why is understanding changes in Antarctica important for Aotearoa?

A: When we’re in the field we joke that, ‘what happens in Antarctica, stays in Antarctica’, but with climate of course that’s not true! As outlined above, when we melt ice in Antarctica, we raise sea levels around the world, including around the coast of New Zealand. The effects on climate from meltwater entering the Southern Ocean also directly impacts New Zealand. 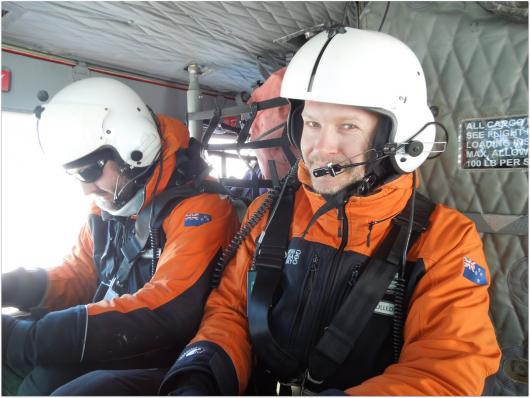 Nick on a helicopter in Antarctica, 2012

Right now we’re in the middle of a 5-year, $7M MBIE-funded programme ‘NZSeaRise’ that aims to better quantify the consequences of melting ice sheets and global climate change on New Zealand, from the physical changes right through to the social and economic impacts. This GNS Science-led programme links key researchers from VUW and NIWA with many others from a range of New Zealand and international research institutes.

An international scientific review co-authored by Golledge found ice sheets in Antarctica and Greenland had tipping points at which melting would rapidly ramp up, and ice sheet retreat could become unstoppable.

His ongoing research faces many challenges, yet its goal of better understanding the relative importance of environmental forcings in terms of their impact on ice-sheet evolution could help with highlighting the importance of reducing carbon dioxide emissions in the next 20-30 years to avoid committing the ice-sheet to ongoing and significant mass loss. He received a $345,000 Marsden Fund grant for his research "Will the East Antarctic ice-sheet contribute to global sea-level rise under warmer-world scenarios?"

When he’s not in Antarctica, you can find Nick with his family, strumming on the guitar in his band or running 60 kilometre-long marathons.

When we’re in the field we joke that, ‘what happens in Antarctica, stays in Antarctica’, but with climate of course that’s not true!