Home News Announcing the winners of the "Ko wai a Rutherford?" design competition

Announcing the winners of the "Ko wai a Rutherford?" design competition

This Hereturikōkā August marked 150 years since the birth of Ernest Rutherford FRSNZ. To celebrate, we held a competition for tauira (Years 1-13) to design their own version of the $100 note, showing us why Lord Rutherford matters. 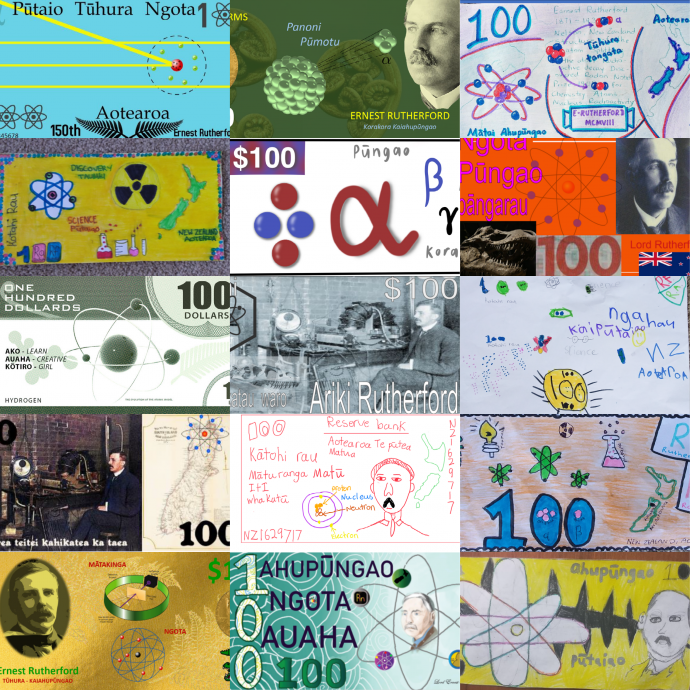 Alongside their designs, tauira were tasked with incorporating three Māori kupu that they feel represents Rutherford's impact, and a video or written piece describing their design.

Kia ora! Thank you to everyone who submitted a design for this competition. We received many creative and impactful designs. We hope you all enjoyed learning more about Rutherford in celebration of his 150th birthday.

Congratulations to our 15 winners (in alphabetical order):

"The three Māori words I chose were taumau meaning discoveries, pūtaiao meaning science, and Whakātu meaning Nelson (which was where he was born). I chose 2 other Māori words that are just on my note - Aotearoa, New Zealand, and kotahi Rau, 100. Ernest Rutherford matters because he discovered and created heaps of new things in his time like alpha and beta rays, laws for radioactive, and the nuclear structure of his atom. I put images of all these on my note to represent these things and why he mattered. A couple of other things I put on my note were the 2 periodic tables of the elements that had something to do with him.

"RF-Rutherfordium and RA-Radium. He created one of these and got one named after him. I also have a map of NZ representing where he lived and was born. The background is orange as orange represents excitement and energy and as Rutherford was a scientist he probably has heaps of these things all the time while creating experiments and new things."

"My $100 bill shows that Rutherford matters in many different ways. The first way is the representation of the famous “Gold Foil Experiment” which he participated in. This experiment helped us discover and better understand the structure of an atom. Prior to this experiment, it was thought that atoms were a single ball full of a negative charge, and afterwards, it was discovered that atoms have a nucleus that stores all of their positive charge and neutral charge.

"The second way that my design shows why Rutherford matters is the alpha and beta in the top left and bottom right corners. Rutherford was the first to coin these terms for different radioactive isotopes, which are still taught as part of Nuclear Physics today.

"The final way that my bill shows why Rutherford matters is the atoms in the big ‘100s’ in the corner. Rutherford’s model of the atom was the first model of the atom that we today can positively recognize as an atom. This contribution is important because, even though it is not the model that we use today, it helped introduce the idea of a nucleus to the world.

"The three kupu that I use are pūtaiao (science), tuhura (discover), and ngtoa (atom). These three kupu were chosen because I feel like Rutherford has a strong connection with all three kupu. This is because he added to science with his discoveries on things on an atomic level."

"The 3 kupu that we have decided to use for the $100 bill are ahupungao, ngota, and auaha. Ahupungao means physics because Rutherford dedicated most of his life to physics and discovering new things. Most of his work was concentrated on atoms, so that’s why we made one of our kupu ngota- meaning atom. Ernest Rutherford successfully managed to split an atom into three sub-atomic particles- protons, electrons, and neutrons. He was creative, smart, persistent, and innovative to be able to uncover and discover the things he did, so that is why we decided to make one of the kupu auaha- which means innovative because that definitely describes his character.

"We wanted to make it modern and beautiful and showcase what Ernest Rutherford has done, so we drew him with an atom behind him, with pictures of what he had accomplished in the electrons to showcase that. We also wanted to show some Māori designs and NZ to show he is from NZ and we are proud, so that is why we have a drawing of NZ with Māori patterns in it." 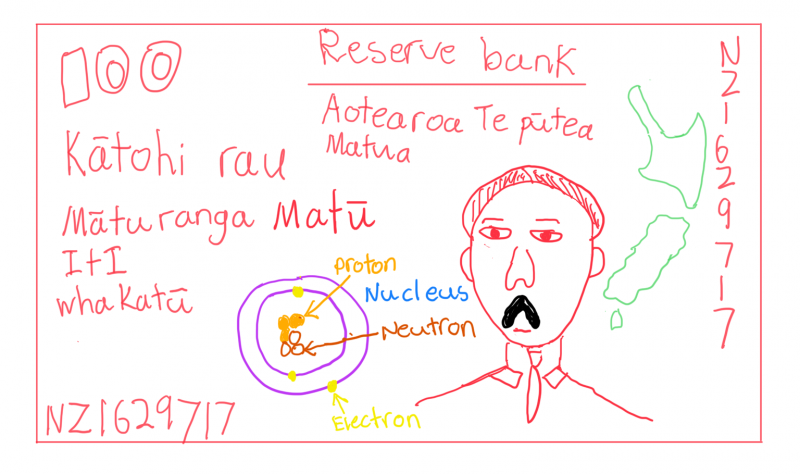 The following is transcribed from Boyi's voice recording sent with his submission:

"This is my design! First, this is 100, kotahi rau, it means $100. Second, here are three Māori kupu: mātauranga matu means chemistry; iti means small, the atom is very very small, it is invisible; Whakatū means Nelson because Rutherford was born in Nelson. Third, this is my money. Fourth, this is the structure of the atom. Before Rutherford, other scientists thought that atoms were like watermelons with many seeds that fit inside. However, Rutherford discovered that inside the atom there is a very small nucleus just like a peach. Fifth, this is Ernest Rutherford I drew, this is the Reserve Bank of Aotearoa Te Pūtea Matua, this is the money number again!" 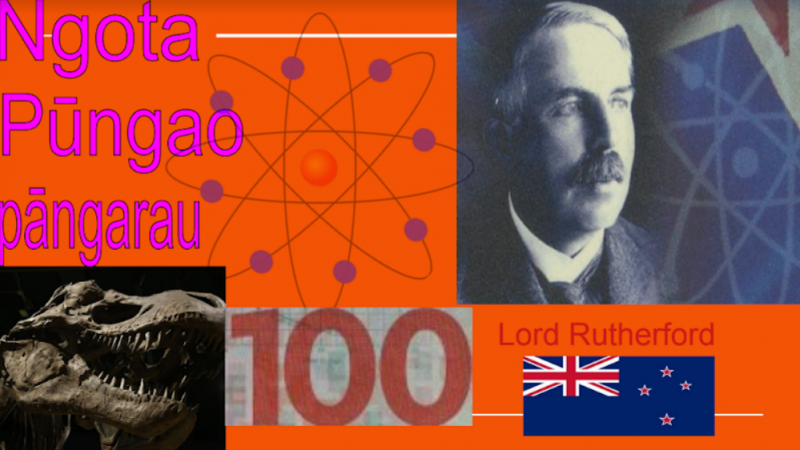 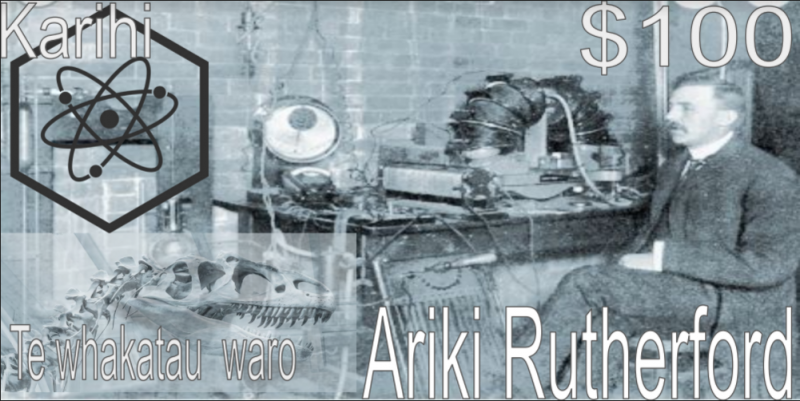 "I put in a dinosaur because his discoveries and theories led to te whakatau waro (carbon dating). I also put him and his lab in it. The atom is there because he discovered the nucleus. Ariki Rutherford means Lord Rutherford in te reo Maori."

"Hi my name is Christopher, and this is my $100 note. This is a picture of Ernest Rutherford, this is a picture of an atom, and in the background this is supposed to be a New Zealand fern, and I put the $100 symbol in these two corners. The words I chose are ‘ngota’ which means atom, ‘pūtaiao’ which means science and ‘ahupūngao’ which means particle and why I chose those words is, why I chose atom is because he found out what was inside the atom, why I chose science is because he did science stuff and why is chose particle is because he made the particle accelerator. Why he matters is he created the atomic model and he discovered the atom is mostly empty."

"My $100 note shows the atomic model that Ernest Rutherford established.

"[I picked the three kupu that I did because] I feel it's important for girls to take more interest in science, the more creative it can be the more fun it is to learn."

"On my redesign of the $100 note I included the symbols (greek letters) for alpha, beta, and gamma rays. Whilst Ernest Rutherford did not discover any of these rays, he was the one who named them. Rutherford also worked extensively with alpha particles and this eventually led him to discover the structure of the atom. It was by bombarding a piece of gold foil with alpha rays that he found the atomic nucleus. I chose the word ‘pūngao’ because all these rays have energy associated with them. I chose the word ‘aho’ because gamma radiation and light are both electromagnetic radiation. I finally chose the word ‘korakora’ because alpha and beta rays are in fact particles, alpha is a helium nucleus and beta is an electron (or sometimes a positron - an anti-electron)." 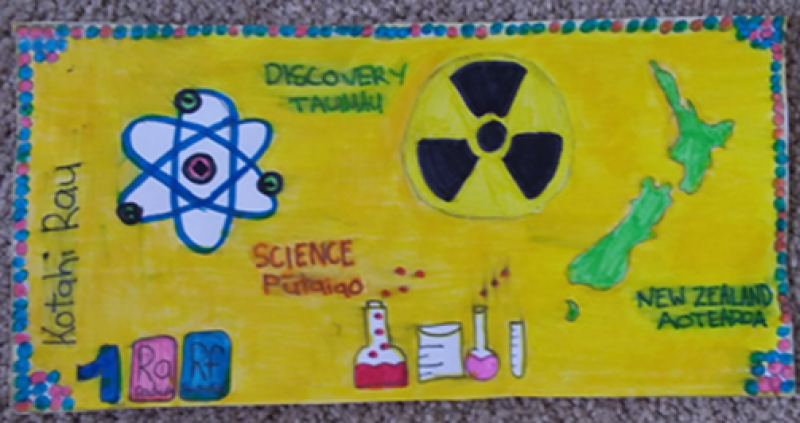 "I decided to take part in this competition because it gave me something to do during the lockdown and now I know more about Ernest Rutherford as well. I chose to colour in my note yellow because Rutherford’s favourite experiment was the gold foil one, which is why the background is yellow because of the foil. Around my border I have little atoms, in fact, I have 150 of them to celebrate his 150th birthday. The atoms are pink and blue because that is the colour Rutherford wanted them to be. On the left-hand side, I’ve got the model of the atom as it was his favourite part of the atom experiment. On the right hand, I have the radioactive symbol because he created the rules of radioactiveness. I have New Zealand Aotearoa because his home country is Brightwater, Nelson where he grew up with his 11 siblings. I’ve also got beakers and jars indicating science and physics because they were both his favourite subjects at his 7 universities. My 100 is the periodic table designs, representing Rutherfordium and radium. Ernest Rutherford matters because of the atom and radioactive experiments because of the neutrons, electrons, alpha, and beta results. I chose to do 4 Māori words, discovery - taumau, science - pūtaiao, New Zealand - Aotearoa, and 100 - kotahi rau. I chose to do discovery and science because that is what made Rutherford and that is what brought him together. I chose New Zealand because that was his home country and I chose 100 because I designed the $100 note." 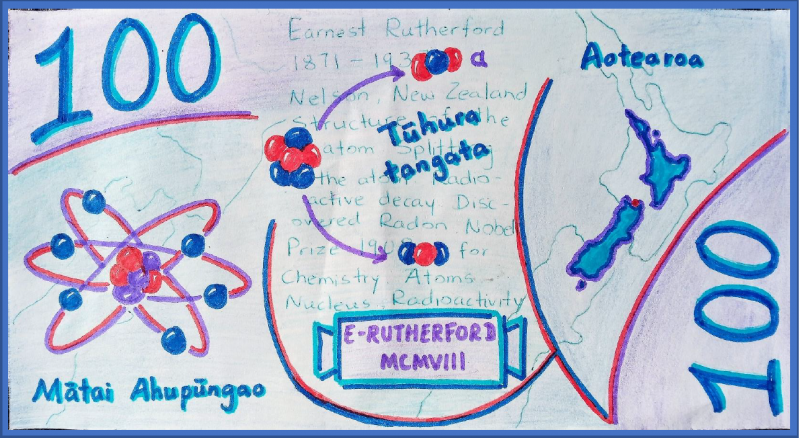 "In my design, I considered both Ernest Rutherford’s achievements and his impact as a scientist and New Zealander. The design is dominated by 4 main elements:

"In the background, I have repeated the outline of New Zealand to further reinforce the interconnection between Rutherford and New Zealand, and also a paragraph of text that contains keywords related to Rutherford and his discoveries, such as splitting the atom, modelling the atomic structure, discovering radon, alpha and beta rays, outlining the laws of radioactive decay and other important discovering in the field of nuclear physics. I used the words ‘mātai ahupūngao’ to show his connection with the field of physics, ‘tūhuratanga’ to portray his significant discoveries and ‘Aotearoa’ to illustrate his connection with New Zealand." 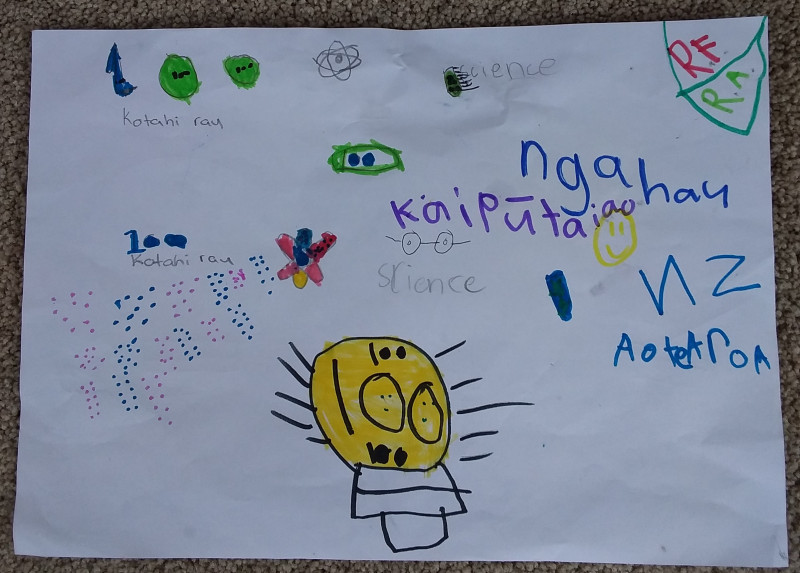 "I had lots of fun colouring my design. The three Māori words I used are kaipūtaiao, which is scientist in English. The second word I used is ngahau which means interesting. The third word I used is Aotearoa meaning New Zealand. I chose scientists because Ernest Rutherford was a scientist. I chose interesting because his science is interesting and I like it, and I chose New Zealand Because he lived and was born there. I showed how Ernest Rutherford mattered by drawing some science beakers, a lightbulb and a model of an atom. He mattered because he did lots of cool science and created some new things to do with science. On my note, I also added RF and RA For the periodic table elements, and I added 150 blue and pink dots to represent his 150th birthday. His favourite colour is green so coloured some things in green."

"My $100 bill shows the Rutherford model of an atom roughly centred on Nelson where Rutherford was born. It also shows as a picture of his lab where he discovered that the atom isn’t like a blueberry muffin in which the protons fit inside a big electron but instead that the atom has a nucleus and electrons orbiting it. I chose the whakatauki “Iti rearea teitei kahikatea ka taea" (although small, the bellbird can achieve great heights) because Rutherford was born in small-town New Zealand which at the time only had a population of 256,393 people but yet he managed to disprove a theory that had been around since 1904 and so he would be like the small bellbird climbing up the tall kahikatea."