Home What we do Our medals and awards Discontinued awards T.K Sidey Medal

Such research may have included interaction with matter, its impact on living organisms, its use in communications or its application in any other manner beneficial to human welfare.

Background on the medal 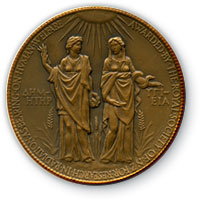 T. K. Sidey (1863-1933) served in Parliament from 1901 until 1928 when he was called to the Legislative Council as its leader, serving as Attorney-General and Minister of Justice. The promotion of legislation for daylight saving was a special concern and he promoted the Summertime Act which was passed in 1927.

The T. K. Sidey Summer-Time Fund was established by the transfer to the New Zealand Institute of £500 collected to commemorate the passing of the Summer-Time Act 1927 through the instrumentality of Sir Thomas A. Sidey; the revenue in terms of the declaration of trust is to support the award of the T. K. Sidey Medal.