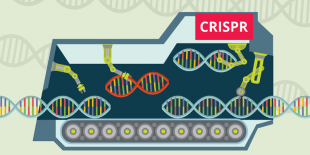 Gene-editing technologies use proteins, called enzymes, to cut targeted areas of DNA within a genome. Cells repair these cuts but if no instructions are provided for the repair, the repair process can make mistakes, resulting in altered DNA sequences. If specific DNA repair information is provided, however, the cell will use this to repair the cut in the way it is instructed. The use of this process provides an opportunity for researchers to modify the genome, by providing slightly different repair information from what was there before. In this way, it is possible to use gene editing to change a version of a gene from one that causes disease to one that does not (for example gene variants that contribute to Parkinson’s disease or genetic metabolic disorders), or choose the version of a gene that confers better resistance to disease in agricultural plants and animals (for example resistance to powdery mildew in wheat).

It is also possible to use the technique to modify genes without introducing foreign DNA sequences. For example, gene editing can be used to switch off genes in laboratory-grown cells to identify their function, or to switch off genes that are causing disease, such as in animal models of Huntington’s disease. Alternatively, a DNA template could be provided for a whole new gene based on a gene found within the same species, or from a different species, providing a new set of traits such as new disease resistance or hornlessness in dairy cows.

While technologies to make cuts in DNA have been known since the 1970s, using them in a controlled and accurate way, and in organisms whose genome is poorly understood, has been a major hurdle. However, in the last 10 years, researchers have identified, or created, proteins that permit gene-editing technologies to make gene edits in specific areas of DNA, rather than introducing these changes randomly into the genome. Also, advances in very rapid genome sequencing now mean that genome DNA sequence information for any species can be quickly assembled, opening up the way for widespread use of gene editing approaches.

The three main new gene-editing technologies which have been developed to do this (See FIG. 1) are: 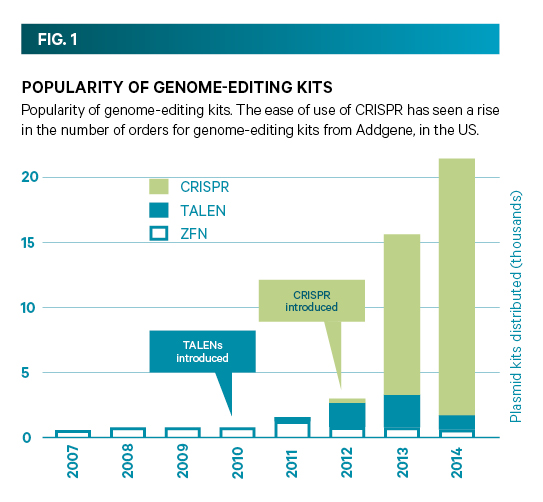 Learn more on how these new gene editing technologies are being used.