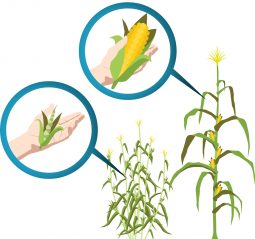 Some 6,000 – 10,000 years ago, Meso-American farmers began the drastic changes to a grass species called teosinte to become what is now known as maize. Through selecting and growing plants based on very rare, desirable attributes caused by naturally occurring mutations, a plant was created with a single stalk and a cob with dozens or even hundreds of large seeds that were encased in husks, resulting in the maize that is grown today.

Since the 1930s, chemical methods or ionizing radiation have been used to change (or mutate) genomes, and to introduce new traits. This is a random process and breeders do not know what changes had actually occurred in the DNA. These methods are considered established tools of conventional plant breeding, along with ‘marker assisted selection’ in the last 15 years. This latter process involves the genetic screening of agricultural plants and animals to see which individuals have useful versions of specific genes, and then selectively breeding from them. This selective breeding, however, would still introduce thousands of ‘unwanted’ genetic variations alongside any desired genes identified.

The introduction of genetic engineering in the 1970s and 80s enabled the possibility of moving beyond the conventional sources of random genetic variation, described above, by allowing researchers to introduce a specific single new or altered gene, or to disrupt or enhance an existing gene. While more targeted systems were available for some organisms, in many cases (such as in plants) the first set of tools provided little control over where new engineered DNA could be integrated into the organisms’ genome. Two of these techniques used bacteria or viruses to transfer the DNA, and a third method involved coating small metal particles with the DNA, and then ‘shooting’ the particles into cells.

The impact on the biological sciences since these first tools were developed has been profound. However, in the past 10 years, researchers have developed tools to enable the manipulation of specific genes within a genome with greater and greater precision in the modification process, and fewer and fewer unintended changes elsewhere in the genome. With their wide availability and simplicity, these gene-editing technologies are now being used to significantly accelerate research, and offer new treatments for a range of genetic diseases, while new agricultural products are beginning to be commercialised.

Alongside the development of the technology, the concept of genetic engineering, or genetic modification, has raised ethical and values-based questions in many societies. New Zealand has adopted a regulatory framework under the Hazardous Substances and New Organisms Act 1996 (HSNO Act) to manage adverse effects on the environment and health and safety of people associated with the technology, which takes into account both benefits and risks. This act is based on the assumption that genetically modified organisms are different from unmodified organisms and can be distinguished from them. Food which has been derived or developed from an organism that has been modified by gene technology must also meet the Australia New Zealand Food Standards Code. With the arrival of new gene-editing technologies there are now increasing challenges to New Zealand’s national regulatory system’s ability to distinguish between genetically modified and conventionally produced products and organisms.

What is classified as a genetically modified organism?