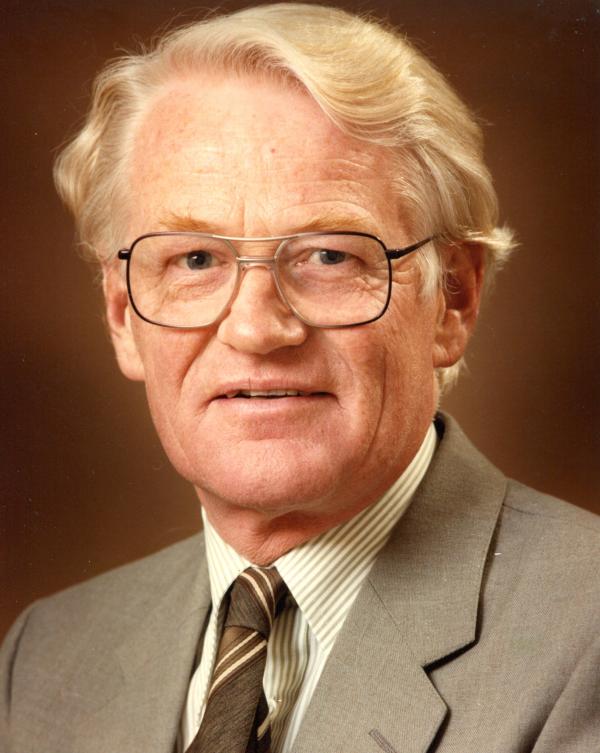 David Kear was Director of the New Zealand Geological Survey from 1967 to 1974 when he was appointed assistant Director-General of the Department of Scientific and Industrial Research (DSIR). He was later Director-General from 1980 until 1983 when he retired.

In his career as a geologist and science administrator, David made a major contribution to the knowledge and utilisation of New Zealand’s mineral resources and the application of science to practical problems.

Born in London, David was educated at Sevenoaks School, where he was head boy. Awarded a scholarship to the Royal College of Mines at Imperial College, he completed a degree in mining engineering, including several months’ practical experience in south Wales coal mines. He later said that this convinced him that he did not want to spend his life working underground. He spent the later part of the war and its aftermath, from 1944 to 1947, in the Royal Navy. During this period he served on a number of ships including HMNZS Archilles, and visited Australia and New Zealand. Returning to Imperial College for postgraduate study in geology, he applied for a job he saw advertised with the New Zealand Geological Survey. Before leaving England he married Joan Bridges, and they spent their honeymoon on a 5-week sea voyage to New Zealand.

When the Kears arrived in New Zealand late in 1948, there was a major post-war energy shortage. Much of the work of the Geological Survey was concentrated on coalfield investigations. Initially posted to Greymouth, David and Joan Kear spent their first summer investigating the coal resources of the Murchison area with Pat and Daphne Suggate. A few months later this was followed by a transfer to Ngaruawhia to investigate the Waikato coalfields in conjunction with Jim Schofield and later Barry Waterhouse. It was the start of a highly productive scientific period when David produced many reports, maps and publications. A natural leader, he was immediately appointed District Geologist, and throughout his career he always had administrative responsibilities which he carried out efficiently.

Initially investigations at Ngaruawahia focussed on detailed mapping of the Waikato coalfields and estimation of coal resources, and David was always proud that this work provided the basis for the Meremere and Huntly power stations. Subsequently the scope of their work expanded to include regional geological mapping of the area around Hamilton, eventually published as the Ngaruawhia subdivision (NZGS Bulletin 88). In conjunction with Charles Fleming, David spent periods mapping fossiliferous Jurassic rocks around Kawhia (NZGS Bulletin 67). In 1956 David and Bryce Wood spent three months undertaking a reconnaissance survey of Western Samoa, aimed at locating groundwater resources (NZGS Bulletin 63). Over the years David was to return to Samoa many times to assist with groundwater investigations.

In addition to these and other activities, David enrolled for an external PhD from the University of London, and spent many weekends and holidays studying the geology of the Te Akau area, west of Hamilton. His PhD was awarded in 1964.

In 1957 Dick Willett, newly appointed as Director of the Geological Survey, initiated a 10-year crash programme to produce a new 1:250,000 geological map of New Zealand. This took priority over all but the most urgent economic projects. Staff from Ngaruawahia moved to an expanded Auckland office at Otara in 1958, and David was again District Geologist, now responsible for the mapping of the upper part of the North Island. He quickly completed the Hamilton sheet, incorporating most of the work that had already been done, and filling in the gaps. He then moved to Northland, working in conjunction with Bob Hay, to complete the North Cape sheet. He was also involved in some of the early exploration of the Ngawha geothermal field. David was starting to develop ideas that there had been large-scale overthrusting of older rocks over younger sequences in Northland, based on drillhole results, but Bob Hay was adamantly opposed. In later years, David ruefully recalled that the North Cape map was an inconsistent patchwork, depending on which geologist had interpreted particular areas. He was pleased that the concept of the Northland Allochthon had become widely accepted a few decades later through the work of a younger generation of geologists.

The development of a New Zealand steel industry, based on the widespread titanomagnetite sands along the west coast of the North Island, had long been delayed by technical difficulties. In 1960 the government set up the New Zealand Steel investigating company, with directors from the private and public sector. A number of DSIR staff were seconded to the company including David, whose immediate job was to find a deposit of ironsand with over 80 million tonnes of high-grade concentrate close to suitable transport – a challenging problem as earlier surveys had concluded that such a deposit did not exist. Based on his PhD work around Te Akau, David reasoned that such a deposit might be found on a raised interglacial terrace, but be covered by recent dunesand. His logic proved correct, and a suitable deposit was subsequently proved up by drilling at Waikato North Head. Finding a suitable site with solid foundations for the steel mill itself was more difficult because of the widespread presence of peat in the Waikato valley. Using geological maps, David found a suitable site at Glenbrook on old lava flows.

Formation of an interdepartmental Mineral Resources Council in 1963 led to recommendations for a major increase in investment in the mining industry, including an increase in DSIR work in different fields. This led to the appointment of David as Chief Economic Geologist, responsible for all economic and applied geology within the Geological Survey. In 1965 the Kear family moved from Auckland to Lower Hutt. Two years later, when Dick Willett transferred to DSIR Head Office, David Kear was appointed as Director of the Geological Survey. In 1973 he was elected a Fellow of the Royal Society of New Zealand.

During the preceding decade, the 1:250,000 mapping programme had taken priority over everything else, so when David took up his new position there were some long-term issues that needed attention. In particular, there was a huge backlog of manuscripts awaiting publication, and with his active encouragement a record number of maps and NZGS bulletins were published in the next five years. New groups focussing on applied geology were set up, including engineering geology (under Les Oborn), earth deformation (under Gerald Lensen) and petroleum (under Rudi Katz). Offshore drilling for petroleum started in 1970, and led to an expansion in paleontological services for the oil industry. David administered with a light touch and delegated responsibility to his senior staff. The organisation ran smoothly under his directorship. He was helped by the fact that it was a period of prosperity, without financial cutbacks.

In 1974 David was appointed assistant Director-General of DSIR, and in 1980 he became Director-General, responsible for a large and diverse scientific organisation. In conversation after his retirement, he recalled that this was a complete change in direction and he was suddenly dealing with issues that had never concerned him previously. For example, one of his first tasks was to represent DSIR at the hearings of the Royal Commission on Nuclear Power, which involved a crash course in the scientific issues involved.

The period he spent at DSIR Head Office coincided with a series of energy crises in the 1970s and 1980s. This led to the “Think Big” projects developed by the Muldoon government under energy minister Bill Birch, most of which required scientific input and evaluation. David played a leading role in the formation of Petrocorp, the state-owned exploration company, leading to the discovery of oil at the McKee field. This was particularly satisfying to the local geological community, as the oil companies up to that time had maintained that New Zealand was a gas province, and therefore not worth exploring for oil.

Although David was working effectively as a senior Departmental head, he reached the compulsory public service retirement age of 60 in 1983. It was a waste of a competent administrator, but David commented a decade later that he had few regrets, especially as he escaped the impact of major government restructuring in the late 1980s and 1990s. In the 1983 Queen’s birthday honours, David was appointed a Companion of the Order of St Michael and St George (CMG).

Joan and David Kear had already decided that they would retire to Ohope, the beach suburb of Whakatane, where they built a home that they lived in for the next 30 years. David continued to do some consulting work, both in New Zealand and overseas for a few years, and he and Joan entered fully into the life of their local community, for example as foundation members of the Whakatane Probus Club and Friends of the Whakatane Museum. David wrote a number of articles on the local geology for a non-technical audience, and had planned to write scientific papers on the tectonic development of the North Island. Unfortunately this was when the isolation of Ohope became apparent as he had little access to modern literature. He was disappointed that his papers were not accepted for publication, and published several privately. In later years he became sceptical of the evidence for anthropogenic global warming.

Joan Kear died in 2013. David continued to live at Ohope until early 2018, before moving into nursing care at Mercy Parklands in Auckland, close to some of his family. His daughter, Susan Shaw, commented that David enjoyed happy memories from his ‘lucky life’ (as he put it) that were recorded in a continuous slide show set up his room that reminded him of the many people, places, activities and events that shaped his life.

David Kear was one of the very few living Foundation Members of the Geological Society of New Zealand (formed in 1955), and was an active participant in the early years, serving as the society’s youngest president (aged 36) in 1959-60. He also played a leading part in organising the society’s first conference held in Hamilton in 1967.

Kear D 2013. A Kear Twosome, for Joan’s memory and our family. Published by David Kear, Whakatane.

The Kear Collection – a series of self-published articles by David Kear, listed on the GSNZ website at http://www.gsnz.org.nz/information/articles-i-24.html

The GNS bibliographic database lists 173 publications by David Kear. The list below gives his key publications, illustrating the variety of his work: