Past President's speech at farewell function

Emeritus Professor Richard Bedford shares some thoughts at his farewell function at which his presidential portrait was unveiled.

It seems almost like yesterday that I was in this room at a similar function three years ago when David Skegg presented his portrait to the Society.  I recall him pulling back of the cover and the reflective silence that followed.  I think I’ll get that part of the past-President’s duties done at the outset so you have something to look at while I say a few words about my term as President.

The tradition of a President’s portrait is relatively recent.  It owes its origins, I understand, to Charles Fleming who decided, on the occasion of the Society’s centenary, that portraits of all previous Presidents should be commissioned.  Some had had their portraits painted but, for many, the record was preserved in a photograph.  A large number of the portraits of Presidents before 1969 were painted from photographs.

The President needs to choose the painter of their portrait.  After reviewing a number of the painters included in the interesting history of Society portraits prepared by Rebecca Priestley, my wife Jan and I chose Marianne Muggeridge to paint my portrait. 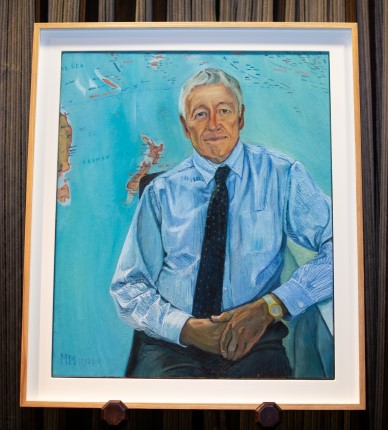 Marianne has painted several prominent members of the Society including Sir Alan MacDiarmid, Sir Paul Callaghan, Professor Carolyn Burns, Professor Marston Condor, Professor Vaughan Jones.  She is not a fan for painting from photographs – live sittings are her preference.  Marianne came to Auckland and we had 10 days of sittings before she was happy with the bulk of the painting.  She completed parts of the background in her studio in Taranaki.

I found the whole process a very interesting experience.  Marianne’s partner, Roger Morris, also an artist, pointed out to me on the first day that portrait painting is hard work for the artist.   It is worth remembering that every hour of sitting by the subject is an hour of standing at the easel, working with oils with your arms mostly at shoulder height.  I came to the conclusion that painters need to be strong – this is not a job for people who did not like being on their feet for long periods.  Jan and I think Marianne did a great job. 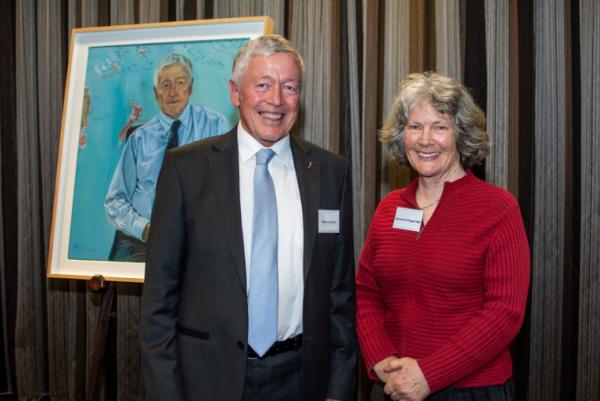 I need to acknowledge that when I became President in July 2015 the Royal Society Te Apārangi was probably in the strongest position it had ever been thanks to the work of previous Chief Executives, Society staff, Council members and Presidents, especially through the 1990s and 2000s.  If you read John Martin’s excellent history of the Society that was prepared for the 150th anniversary, it becomes very clear that Te Apārangi in 2015 was a very different national academy from the one that existed at the time Charles Fleming wrote his centennial history in the late 1960s.

It is much easier to be President of an organisation that is in a healthy financial position and is seeking to increase its relevance and reach, than one which is struggling to justify its existence.  Thanks to excellent work done by the former Chief Operating Officer, Phillippa Gardiner, the former Chief Executive, Di McCarthy and prudent management by David Skegg and his Council, Andrew Cleland and I inherited a very healthy organisation. 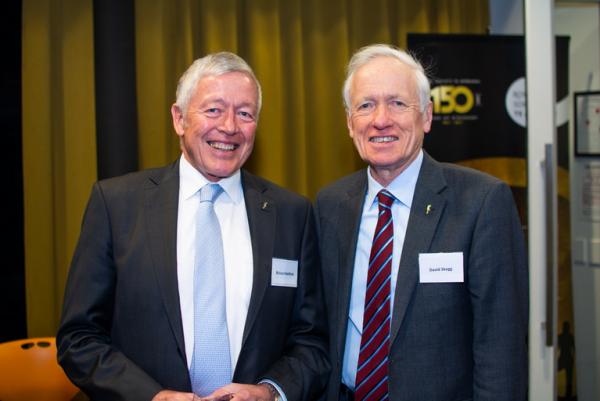 Richard Bedford with his predecessor as President, Sir David Skegg

In addition to inheriting an organisation in good shape, the 150th Anniversary gave us the opportunity to reflect critically on how we might make the Society more relevant as a national academy for the 21st century.  A generous budget for the anniversary year enabled us, amongst many other things, to undertake a major reassessment of our brand and how we might extend our reach into a wider range of research communities.

Thanks to Andrew’s links with several of the CRIs, the Independent Research Organisations and the business community regular meetings with CEs were instituted.  A concerted effort was made to engage with the premier University-based Māori research centre of excellence – Ngā Pae o te Māramatanga and, more recently, with the CEs of the three Wānanga: Aotearoa, Awanuiārangi, and Raukawa.  The Council and the staff of the Society have made a major commitment to ensuring Te Apārangi becomes increasingly relevant for Māori researchers.

The very low representation of women in the Society’s Fellowship attracted considerable attention during the 150th Anniversary.  A number of initiatives have been taken by the Academy Executive to ensure biases in selection processes are addressed consciously without compromising the high standards of excellence in research that define the Society’s Fellows.

The criteria for becoming Companion of Te Apārangi, as well as for some of the Society’s medals, have also been reviewed.  All of these changes are designed to assist the Society “to encourage, promote and recognize excellence in science, technology and the humanities” – one of the primary functions listed in the Act.

Another major opportunity that the 150th Anniversary provided was in re-vitalising our connections with Branches and Constituent Organisations.  In my view, these components of the Society’s membership remain somewhat under-valued.  I have really appreciated the efforts that Society staff and Council members representing these membership groups have put into strengthening ties with two types of institutional membership that reach much wider professional and public constituencies than the Society could reach on its own.

There are many other dimensions to the Society’s activities and I want to finish with a brief reference to three that I have personally found very enriching during my time as President. The first is the engagement with schools, especially our teaching leadership programme, the CREST Awards, and the Powering Potential and Curious Minds initiatives.  Any organisation that wants to survive must invest in the generations of future leaders.  Te Apārangi does this in a number of ways but this dimension of its activities is often overshadowed by other roles of a national academy.  In a society that is dominated by the voices of the “baby boom” generations, of which I am a part, we must make more effort to acknowledge the contributions of those preparing the successors to what has been a “noisy” and often privileged generation for too long.

The second activity that has been very rewarding over the past five years is engagement in the Society’s expert advice programme which delivers on our legislated objective of promoting “public awareness, knowledge and understanding of science, technology and humanities”.  A more focused approach to expert advice has accompanied a productive working relationship with the Office of the Prime Minister’s Chief Science Adviser.  Te Apārangi has been a reasonably regular participant in the monthly meetings of Ministerial Science Advisers and this has ensured a co-ordinated approach to some critical areas of public and policy concern.

The third area I want to mention is the work the communications and outreach team do to ensure Te Apārangi contributes to “fostering in the New Zealand community a culture that supports science, technology and the humanities”.  I have avoided mentioning specific names because there is a risk I will miss some key players, but this team has done a fantastic job over the past three years extending our reach via social media, the print media, engagement events, high-profile speaker series and our annual Research Honours dinner.  Our public profile has been raised, sometimes by quite contentious debates about things we have been doing.

In terms of becoming more widely known we have been favoured by a succession of major commemorations – our 150th anniversary in 2017, the 125th anniversary of suffrage in 2018,  the 250th anniversary of the first substantive encounters between  18th century western and Māori ways of knowing the world in 2019 and, also in 2019, the 100th anniversary of the Fellowship of the Royal Society of New Zealand.  Anniversaries are great occasions for reflection and innovation.

I have been privileged to be President during a period when several anniversaries of relevance to a national academy have arrived in sequence, a CE who does not like sitting still, a Council that wants to make a difference, and a staff that plays a major role in drafting and delivering Te Apārangi’s strategic plan, have made the most of these anniversaries to further a core agenda of increasing Society’s relevance in the 21st century.

When David presented his portrait to the Society I noted that his energy and commitment as President had generated considerable momentum for the Society between July 2012 and June 2015.  I expressed the hope that we could build on his legacy over the next three years as we took the Society through its 150th year.

Looking back I think I can say we realised that hope.  The Society’s annual report for 2017 contains an excellent review, month by month, of the great range of activities that our national academy engages.  This is far broader and more influential than I realised when I became a member of Council in July 2013.

The academy really is like the eye of the needle in the late Maori King, Potatao te Wherowhero’s famous whakatakui:

Accommodating diversity, making connections and collaboration will be the essence of a successful 21st Century national academy.  I look forward to continuing to work with the Society’s Council members, staff and the various categories of membership “to foster in the New Zealand community a culture that supports science, technology and the humanities, without limitation”.