For those of you who don’t know who I am, kia ora koutou, I am Wendy Larner, the recently appointed President of Te Apārangi.  In my day job I am Provost at Victoria University of Wellington so I am currently learning all the short cuts between Kelburn and Thorndon!

It is a great pleasure for me to also welcome you here this evening.  Nau mai haere mai.  We are delighted that you could join us. 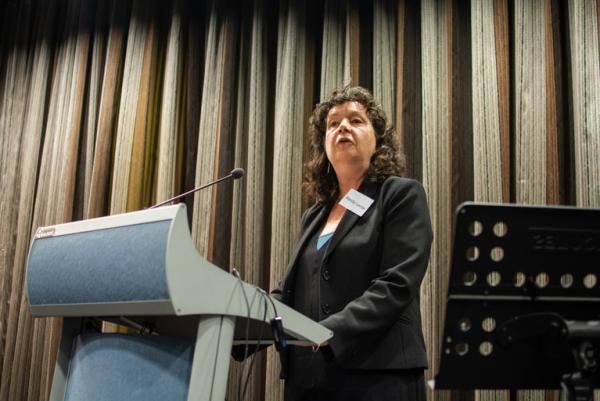 This evening is a time to celebrate, and a time to farewell our outgoing president Richard Bedford.  Celebrating and reflecting on Richard’s (or as many of us know him Dick) presidency is both a great pleasure and deeply humbling for me.  Perhaps the most important contribution he made during his tenure was his clear and far-sighted leadership as we turned 150 years old, using this opportunity to set a new agenda of change and diversity, taking the opportunity to create a new legacy for Royal Society Te Apārangi.

Importantly, he acknowledged and gave recognition to the great achievements of the last 150 years.  Looking back, the Royal Society of New Zealand has made an enormous contribution to the research landscape in New Zealand.  But equally importantly, Dick understood the need to look forward, that the Royal Society Te Apārangi needed to do much more to recognise and promote diversity, becoming more relevant to Māori and women, and many other groups who are not well represented.  Thanks to Dick our 150th Anniversary was a time for both deep reflection and revitalisation.

Just our second social scientist - a population geographer - Dick has put a strong platform in place for the revitalisation that I will have the privilege of helping realise.  In additional to leading the changes that will help make Te Apārangi more relevant for Māori and women, he has created space for engagement with the wider research community including the CRIs, independent research communities, the three wānanga, and the innovation communities.

In short, his was a tenure of ambitious transformational change.

I want to make particular acknowledgement of the time Dick set aside for our Branches, building new relationships across Aotearoa, the Society and into our smaller regions.  As always, he was generous with his time, acknowledging all as he went.  I am sure we all agree that, as a leader, Dick is both accessible and personable.  Quite simply he is just a great person!

And that has what has made him such an ambassador, a statesman for Te Apārangi nationally and internationally — promoting mentoring, leadership, and distinction wherever he went.