Natalie at the top of Observation Hill, Ross Island, with views of Scott Base (left) and across the Ross Ice Shelf (Christian Haas)

An interview with marine physicist Dr Natalie Robinson of NIWA, who specialises in polar oceanography. Natalie's research contributes to understanding the oceanic connection between ice shelves and sea ice.

In her work, Natalie tries to understand the “nitty-gritty" so that other people can use her findings to make better predictions of how the ice will respond to a warming ocean. Her favourite aspects of her job are carefully thinking about what data tells her, coming up with new ideas and going to Antarctica. Natalie's research helps climate scientists to better understand what is happening with the Antarctic sea ice and what this means for global warming. 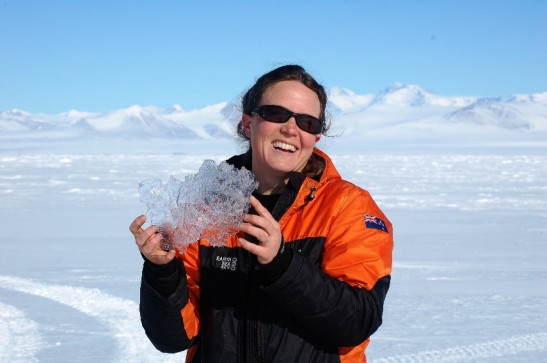 Q: What motivated you to start researching polar oceanography?

A: As a fresh graduate student, I was excited by the opportunity to participate in a field-based study in Antarctica. At that time, I didn’t really know what I was letting myself in for, but I knew it would be a great adventure. It soon became apparent that here was a field that was just on the verge of really opening up, but access was becoming increasingly possible, and it was clear there was plenty remaining to discover.

I was initially snared by the sheer novelty of working in Antarctica, then became captivated by the complexity of the processes I was studying and the sense of true discovery. Today, I still thoroughly enjoy these two aspects, but my motivation has shifted to the necessity and urgency of understanding the intricate processes of ice-ocean interaction, and their far-reaching consequences within the context of a changing planet.

Q: You are particularly interested in answering the question ‘why is Antarctic ice growing if the ocean is warming?’ – have you found any answers yet?

A: This is a tricky one. First of all, we’ve seen the area covered by Antarctic sea ice trending towards greater coverage over the ~40 years of satellite observation. But we’ve not been able to measure its thickness from space (although this is changing as we speak), so we really don’t know whether there is actually more sea ice – it could simply be the same amount spread thinner. Indeed, more recently, Antarctic sea ice seems to have switched gear and has apparently been shrinking over the past 5 years or so.

We’re left really racing to understand the system even as it’s changing beneath us. But one process that I’ve been involved in understanding better certainly works in the ‘right’ direction to explain an increase in sea ice within a warming ocean: We know that water that’s warm enough to melt ice has been getting in under all of Antarctica’s ice shelves (which are the floating extensions of land-based glaciers). The dramatic thinning and retreat of ice shelves in the Amundsen Sea has been headline news for the last few years, and it’s clear that this behaviour is primarily driven by contact with the ocean. In the Ross Sea, the melting has not been so dramatic, but it’s definitely happening. We don’t think there’s been a significant change recently, but we’re identifying vulnerabilities to warmer ocean water that weren’t apparent even a decade ago. This process has not been included in the Earth System Models, so its effect hasn’t yet been tested and quantified for future climate scenarios there.

Q: How can this information help us to better understand global warming?

A: In McMurdo Sound, we’re familiar with accessing and working with ‘supercooled’ water – this means the water is below its own freezing temperature (taking into account pressure and salinity), and yet remains liquid. The only way this can occur is if it includes water that used to be ice shelf but has been melted away by the ocean at depth. So, by working with this water where it comes out beneath sea ice, we’re really working to understand the processes and evolution of ice shelf melting by the ocean. 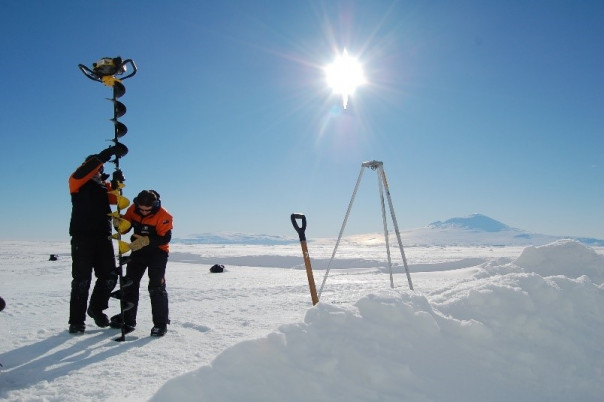 The ultimate aim is to study these ice-ocean processes where they originate, directly beneath the ice shelf. However, that is prohibitively time-consuming and expensive. The advantage of working with this water beneath sea ice is that we only need to get through 2-3 m of sea ice (compared to 300 – 700 m of ice shelf), meaning that we can run experiments year after year, quickly and relatively cheaply. All the while we’re improving our understanding of processes, and our technical ability to handle instruments in very cold water. This means that when a chance to get instruments through one of the deep holes in the ice shelf does arise, we’re prepared and can make the most efficient use of that opportunity.

Presently, we’re actively working to improve our understanding of the detail of how the ocean melts the ice under various conditions. This can then be incorporated into the big computer simulations of the Earth System, from which we get our projections of sea level rise and changing ocean pathways. By improving the details of what’s happening right where the ice first encounters ocean, we expect to provide more certainty of these large-scale impacts under scenarios of a changing climate.

Q: Ice platelets are very beautiful; how do you share this with people? 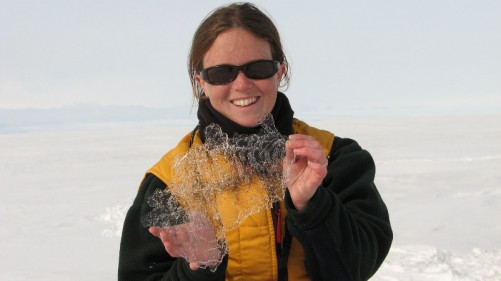 A: The layers of platelet ice are what’s really unique about the work I do, and they’re both intriguing and visually appealing. Whenever I give a talk (either to fellow scientists, the general public, or school kids) I always include photos and/or videos of platelets from our field work. In recent years we’ve dedicated time during our field work to improving how we visually document them. Primarily this serves to improve our own understanding of the material we’re working with, and also helps when explaining the system to our scientific colleagues. Similarly, it provides us with material to share with a more general audience.

In 2016, as part of the Marsden-funded project, I was able to include artist Gabby O’Connor in our Antarctic field work. Her specific task was to document individual platelet crystals after they’ve been brought to the surface, providing both new scientific data and stunning new visual material to share. More recently, we’ve been working with underwater cameras to capture images of the platelet crystals in place. The next evolution of this capability will be used to better understand how the platelet layers change in time, and the role they play in supporting the marine ecosystem by providing a protective habitat for life. 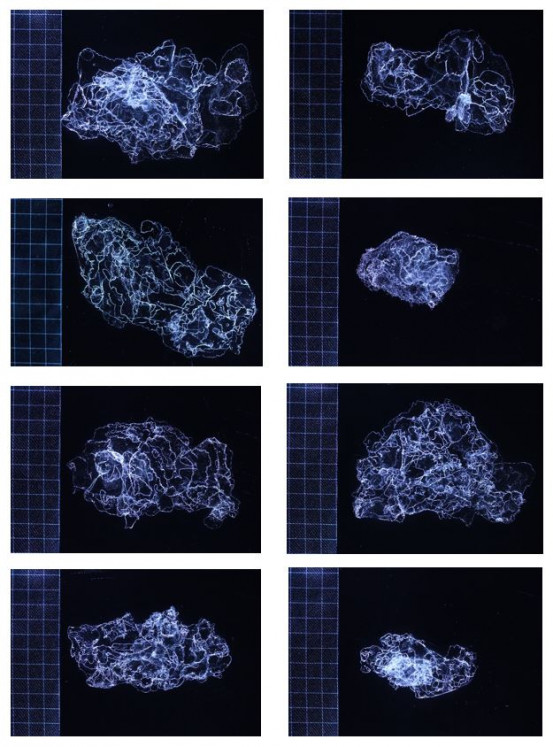 Q: You are passionate about making science accessible to everyone. How do you think we can do this? Particularly with an issue as large as global warming?

A: I believe it is critical that science is accessible to everyone, because we need a scientifically-literate, if not necessarily scientifically-active, society in order to deal with the huge issues facing us today.

Climate change is such a huge issue that it will affect, and is affecting, every aspect of our lives. Personally, I think the most effective place to work is in providing hard science and response strategies to school children. In New Zealand and across the world, it is the young people who are being most vocal with their concerns, and who are calling out for more information. This is appropriate, since they have the most skin in the game when it comes to the future of our planet. And I think we should respond to that by making climate change a compulsory component of the science curriculum at high schools. This would allow the science presented in schools to keep pace with the scientific reality.

Q: What impact do you hope your research will have in Aotearoa?

A: Antarctica is so physically distant from Aotearoa, and the rest of the world, that it would be easy to believe that it doesn’t really affect our everyday lives. But the reality is that Antarctica is a huge driver of global climate, significantly affecting both atmospheric and oceanic circulation patterns. We get the occasional reminder of this when a huge storm sweeps up from the south and across the length of our country. As we work to better understand Antarctica and the Southern Ocean, we’re improving our understanding of the planet and its likely evolution under future climate scenarios.

I hope that the research I conduct, and the various ways I work to communicate it, will help people to appreciate New Zealand’s physical and cultural connection with Antarctica. After all, Māori explorers heading south from New Zealand were among the first to identify the great southern continent.

A: I’m embarking on a whole new challenge as I plan for the next three years of field work in Antarctica. For the first time, I’ll be working directly with biologists and ecologists to understand the connection between the physical structure of the platelet layers and the biology that inhabits them and is associated with them. In particular, we’re looking for Silverfish ‘nurseries’, because Silverfish underpin the ecosystem of the Ross Sea, although so far, their eggs have only been associated with platelet ice up in Terra Nova Bay (~300 km north of Scott Base). We’re wanting to find out if the platelet layers within 30-60 km of Scott Base might play a similar role. In doing so, we’ll better understand the potential vulnerability of the Ross Sea ecosystem to shifts in the climate system.

Natalie’s PhD was in Marine Physics which closely relates to her current research, but she also has a degree in accountancy and a diploma in performance piano. 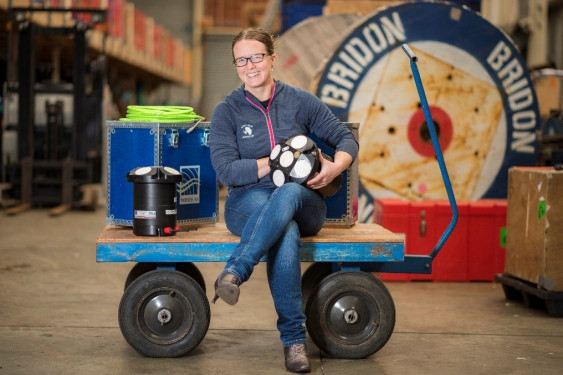 Natalie is passionate about making sciences accessible to everyone and has been a part of science engagement opportunities. In 2015 she was awarded a $300,000 Fast-Start Marsden grant to look at why Antarctica is producing more and more sea ice as the ocean warms through investigating the boundary layer beneath platelet ice. Learn more at her website, Facebook and Twitter.

By improving the details of what’s happening right where the ice first encounters ocean, we expect to provide more certainty of these large-scale impacts under scenarios of a changing climate.