Design of the medal

View the design of the Callaghan Medal 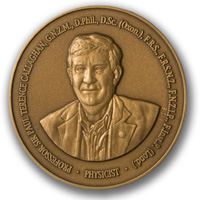 The Callaghan Medal was designed by Phillip O’Shea, the New Zealand Herald of Arms. He has designed many New Zealand medals including several for the Royal Society of New Zealand.

The front of the medal shows Professor Sir Paul Callaghan FRS FRSNZ, and is based on several photographs and an oil portrait held by the Royal Society of New Zealand. He is wearing a GNZM label badge.

The reverse side alludes to Sir Paul being a New Zealand nuclear physicist with an interest in the outdoors. It shows a Hector’s Dolphin within three ovals representing the electron orbital path. The traditional electron has been given a New Zealand flavour with the addition of the koru.

The Hector’s Dolphin is named after Sir James Hector and Sir Paul is a previous recipient of the Hector Medal of the Royal Society of New Zealand.

The dolphin symbol is significant for this new science communication award as the Hector’s Dolphin emits sounds that are thought to be used for communication, notably the complex clicks produced in large groups. It is also a universal symbol signifying speed and diligence.