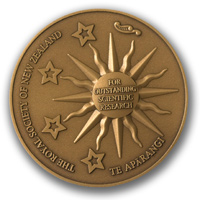 The MacDiarmid Medal was designed by Phillip O’Shea, the New Zealand Herald of Arms. He has designed many New Zealand medals including several for the Royal Society of New Zealand.

The front of the medal shows Professor Alan MacDiarmid FRS Hon FRSNZ, wearing his Nobel Laureate lapel badge and the neck badge of the Member of the Order of New Zealand (ONZ).

The elements incorporated into the other side of the medal include a sunburst, symbolising the universe and the universal standing of Alan MacDiarmid. It is also representative of him being active as a naturist or sun-worshipper.

The four stars symbolise wisdom and human aspiration. More specifically they represent the constellation of the Southern Cross, found on the New Zealand flag, as well as the stars on the flags of the USA and Texas where Alan MacDiarmid spent much of his working life. A star is also found on his Hutt Valley High School badge. They also allude to his four children.

The inaugural MacDiarmid Medal was offered in 2011. Professor Alan Graham MacDiarmid, ONZ FRS was a New Zealand-born American chemist, and one of three recipients of the Nobel Prize for Chemistry in 2000.