Design and background of the Thomson Medal. 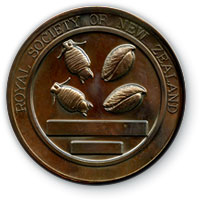 In 1985 the Royal Society of New Zealand created a prestigious award to be made in recognition of outstanding contributions in the fields of the organisation, administration or application of science and technology. The award is known as the Thomson Medal and commemorates the contributions made to science by George Malcolm Thomson (1848-1933) and his son James Allan Thomson (1881-1928). Both are former presidents of the Royal Society of New Zealand Te Apārangi. The Academy Council agreed that the Thomson Medal be awarded annually from 2006.

The Academy Executive Committee agreed that from 2017, the Thomson Medal be expanded to include the humanities and that the leadership awarded in receiving this medal should be above the “business as usual” level.