This section outlines some potential ways sectors can head towards zero emissions. Evidence for mitigation pathways for New Zealand is deficient so these figures are just to provide an indicative approach only. 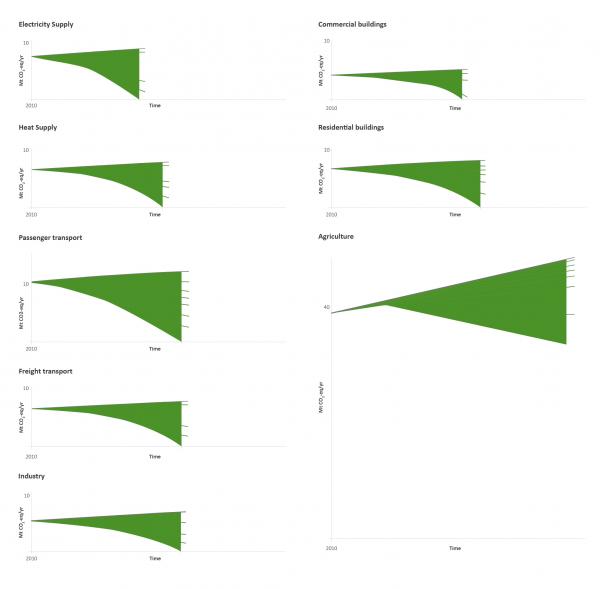 These figures are an approximation based on expert opinion and simply serves to illustrate that all sectors can contribute to GHG emission reductions in New Zealand; achieving zero emissions will be more rapid in some sectors than others with the decarbonising of the electricity sector likely to happen first; and that achieving zero emissions for New Zealand’s agricultural sector is unlikely this century unless there are trade-offs with current growth targets for livestock production and the development of alternative low GHG emitting landuses. However, for the current farming systems, there is some potential for total agricultural emissions to be reduced over time compared with business-as-usual.

Potential actions that New Zealand could take from the range of mitigation opportunities that exist in all sectors, are outlined in more detail below. They are also based on expert opinion, are approximations only, and purely indicative given the high uncertainties of factors such as future costs, trade-offs, technology deployment rates, policies and the absence of detailed data and analysis. Some mitigation options are ready for immediate deployment, while others will not come on stream until various times in the future.