Sugar is a carbohydrate found in natural foods such as fruit, vegetables, honey and milk. Sugar is also used in refined form by manufacturers to sweeten foods and drinks, and for food preservation.

The most common sugars are sucrose, glucose, lactose and fructose. Sucrose is the combined form of glucose and fructose, also called white sugar or table sugar. Lactose is found in dairy products. These sugars all appear in foods and are classified as added, free and intrinsic sugars:

Foods with high levels of added sugars can greatly increase the energy (calorie) content of foods without providing any other nutritional benefits, as opposed to whole foods with intrinsic sugars that are accompanied by other nutrients, such as dietary fibre, vitamins, and minerals.

The current discussion on negative health effects from sugar is mainly concerned with sugars, such as sucrose, that have been added by food manufacturers. Sucrose (derived from refined sugar cane or sugar beet) and high-fructose corn syrup (derived from corn) are used by food manufacturers for sweetening foods and drinks, for food preservation and for enhancing the flavour of processed foods.

It is easy to over-consume sugar 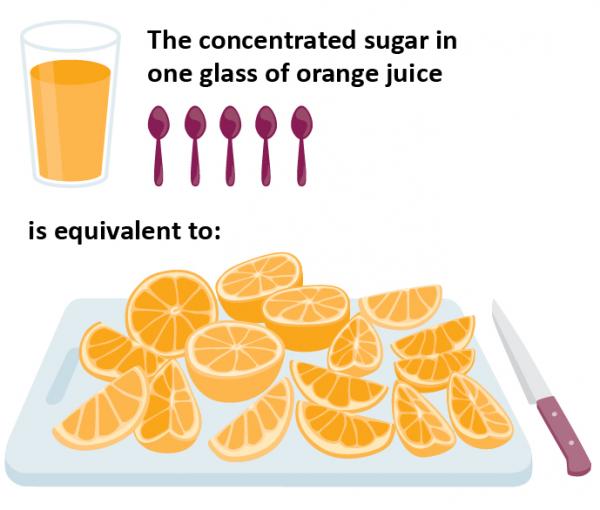 It is easy to over-consume sugar in juice and sweet drinks, as they contain mostly water and sugar. One glass of orange juice can contain concentrated sugar from five or six whole oranges. And while it is easy to drink that much sugar, you would be less likely to eat that many oranges in one go.

Fizzy drinks do not make you feel full as quickly as foods do. This makes them easy to over-consume. And a small fizzy drink contains nine teaspoons of added sugar, so drinking just one can means that you have almost reached your recommended maximum intake for that whole day.