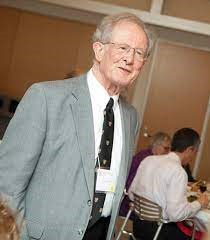 Neil William Ashcroft HonFRSNZ, FInstP, FAAAS, FAPS and Member US National Academy of Sciences, died on 15 March 2021. Neil Ashcroft was an internationally acclaimed Physicist working in the fields of Condensed Matter Physics, High Pressure Physics and Many Body Physics. He is particularly well known for his textbook, co-authored with David Mermin, Solid State Physics, a classic undergraduate text used by most universities throughout the world.

Neil was born in London but came with his family to New Zealand after the Second World War and was raised by his solo parent mother who is still remembered in Eastbourne, Wellington. Neil attended Hutt Valley High School and in 1955 was Dux. He went on to study mathematics and physics at Victoria University of Wellington (then known as Victoria College of the University of New Zealand) graduating BSc (1958), MSc and DipHons (1960). He then undertook PhD studies supervised by John Ziman at Cambridge University, investigating the Fermi surface of metals as it relates to their electronic properties. To his credit, Ziman appears on none of his publications and in fact most of Neil’s early papers were sole authored.

In 1964 he went on to the University of Chicago as a Postdoctoral Research Fellow and then relocated the following year to Cornell University where he remained for the rest of his distinguished research career. While there, in addition to serving as the associate director of Cornell High Energy Synchrotron Source (CHESS) from 1978 to 1989 and its deputy director from 1990-97, and overseeing its proposal review panel and policy advisory board, Ashcroft was director of the Laboratory of Atomic and Solid State Physics from 1979 to 1984 and the Cornell Center for Materials Research from 1997 to 2000. Neil was also a member of the Editorial Board of Physical Review, the leading physics journal at the time.

Prof. Ashcroft became Chairman of the Division of Condensed Matter Physics, American Physical Society and organised the famous “Woodstock of Physics” where the first extensive reports on high temperature superconductivity were presented in a crammed session that ran through the night and well into the early hours of the next morning. Following long involvement with Gordon Research Conferences he became Chair of the Board of GRC Trustees and in 1997 was elected to the U.S. National Academy of Sciences. In 2003, he was awarded the Bridgman Award for his important contributions to high-pressure physics. Neil was appointed Chairman of numerous international review committees and was Visiting Professor at many European, US and Australasian universities.

One of Professor Ashcroft’s most notable contributions was to propose that highly compressed hydrogen would not only become a metal but a room temperature superconductor and this might be the origin of the huge magnetic field of Jupiter. Later he suggested that by using compounds rich in hydrogen (including H2S) the necessary pressures could be lowered to laboratory-achievable levels. This drove a decades long quest which culminated in the spectacular discovery in the past twelve months of room temperature superconductivity in H2S and LaH10 – albeit still at pressures of the order of 2 million atmospheres!

Neil was a big supporter of New Zealand science. Between 1997 and 2013 he returned here each year, working mainly with a group in Industrial Research Ltd  (a New Zealand Government Crown Research Institute) later to become Robinson Research Institute, Victoria University of Wellington. He was a hard-working member of the International Advisory Board of the MacDiarmid Institute for Advanced Materials and Nanotechnology, leading several reviews into its governance and research structure. He lobbied government and its agencies on the future of New Zealand science and it’s untapped potential for enhancing national productivity, manufacturing and commerce. He was a regular and forceful presence at the quadrennial Wagga Wagga conferences on condensed matter physics.

Neil published more than 320 papers and was publishing to the end. His lectures and seminars were notable for their pedagogical finesse, his anecdotes were myriad and always apt, and his interests were broad ranging. Above all he was immensely likeable. Always courteous, always kindly, always thoughtful, always wanting to help.

On behalf of the research community of New Zealand and especially the Physics community, I salute Neil Ashcroft – a man of huge intellectual capacity, a man of warm and generous spirit, a man respected and loved around the globe.