Māori non-fiction books are being celebrated by Ngā Pae o te Māramatanga (NPM) and Royal Society Te Apārangi as part of NPM’s 15th anniversary as New Zealand’s Māori Centre of Research Excellence since 2002, and the Society’s 150th anniversary since the passing of the Act that established the New Zealand Institute in 1867.  From 13th February 2018, a book will be profiled each day of the working week accumulating with the final entry from the list during Te Wiki o te Reo Māori 2018.

About the name: Te Takarangi

The symbol Takarangi is an intersecting spiral pattern used in carving. It uses spaces to separate solid spirals; it is the space that allows us to see the spirals. For some, the open spiral represents the entry of light and knowledge into the world and depicts the linkage of man with wairua. For others, the spirals represent past knowledge and experience linking through time and space with the present. On the prow of waka the spirals provide added stability and balance allowing wind and wave to pass through.

This project proudly grounds itself in these metaphors and connects us strongly to the carved pattern that graces the entrance to Tānenuiarangi, the meeting house on Waipapa Marae, University of Auckland, where the leaders of Ngā Pae o te Māramatanga and the Royal Society Te Apārangi formally gathered on 13th and 14th of February 2017 with the shared aim of strengthening the intent of Te Apārangi to connect more with Māori researchers and Māori communities.  The commitment to pursue this project was made at that meeting.  The secretariat for Ngā Pae o te Maramatanga New Zealand’s Māori Centre of Research Excellence is hosted at Te Wānanga o Waipapa. 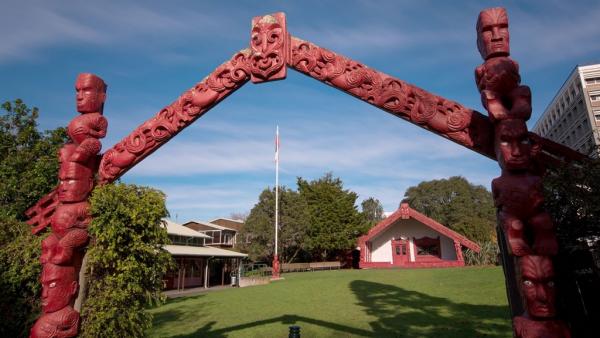 For further explanation of Takarangi as a carving technique, see Te Rangi Hiroa's explanation in one of the books that comprises this 150 sample list: Buck, P. H. The Coming of the Maori. Christchurch: Whitcombe and Tombs, 1949.

About the project Te Takarangi

“This is a powerful opportunity to celebrate together with Te Apārangi the long history of Māori scholarship that exists in Aotearoa. The cumulative weight of the research these books embody is outstanding, representing an incredible collection of voices of Māori inspiration for this nation, talking to us from the past and charting a pathway forward into the future,” says NPM Chair Tā Tīpene O’Regan.

“We are thrilled to be working together with Ngā Pae o te Māramatanga to acclaim these Māori authors and their publications, with this special project that flows on from our 150th celebrations. The books we are promoting represent only a sample of the Māori scholarship that is available to us, but this small selection provides an excellent insight into the depth and breadth of Māori academic excellence and mātauranga that we hope will inspire young and old alike,” says Royal Society Te Apārangi President Professor Richard Bedford.

“We greatly appreciate the work of NPM Co-Director Professor Jacinta Ruru, Associate Professor Angela Wanhalla and Jeanette Wikaira for collating the list and preparing short pieces on each book. It is an excellent piece of work which we are privileged to be able to jointly sponsor,” says Bedford.

Information on each of the 150 books will be progressively published on the Society website over the next several months and NPM and the Society will publicise them on social media. The project will culminate with some activities timed to coincide with Te Taura Whiri i te Reo Māori | Māori Language Week 2018.

“This collection provides an overview of some of the most important Māori leaders, thinkers and authors of our time. There were many outstanding publications we didn’t have room to include, but from the first book published about the Māori language in 1815, to current Māori scholars, researchers and writers making their mark, this list of 150 publications is something we can all celebrate” says Professor Jacinta Ruru.

The list prioritises non-fiction publications and mainly monographs, however includes some periodicals, as well as language textbooks, dictionaries, and edited collections. Although the list is heavily weighted to the later 20th century and beyond, the 150 books chart a wide variety of Māori authorship and its richness, stretching back into the nineteenth-century.

An acknowledgement and celebration of Māori-led scholarship and writing across time and genres, the sample list reads as a snapshot of a time line of Māori history and as a history of Māori in academia, especially in the humanities. The list profiles some of the earliest interactions between Māori and early Europeans and the first te reo Māori publications in the early 1800s, through to the first Māori tertiary scholars, university graduates and political and cultural leaders, who have paved the way for a new generation of Māori researchers and writers. The list is also a collection of voices of Māori inspiration, talking back to us over time and forward into the future. It provides a glimpse into the rich publishing history of Māori-led non-fiction work, with a particular focus on the later years as the growing publication of Māori research has blossomed.

The list prioritises Māori-authored work, or Māori-led work, by Māori employed in tertiary institutions and focuses on non-fiction publications, mainly monographs, although some periodicals, language textbooks, and dictionaries are included. The few edited collections included in the list are some of those that have been important in shaping and informing scholarly debate and even helping to advance new fields of disciplines and include a significant majority of Māori authors.

This list could have been significantly longer. In focusing mainly on monographs, the list does not encompass the similarly long and impressive Māori-led non-fiction publication of newspapers, magazines, journals and journal articles, and the editorship of journal special issues and significant research reports, often published in-house. Given the richness of Māori-led scholarship in these genres, we strongly recommend that subsequent projects be completed with a focus on such publications.

Due to the focus on monographs, the richness and diversity of Māori writing during the nineteenth century is not fully captured. Nineteenth-century Māori had high rates of literacy in their own language and took up writing with alacrity, in texts encompassing whakapapa books, unpublished manuscripts relating to tribal histories, and articles and political writing in Māori-language newspapers, as well as a large volume of epistolary correspondence with Pākehā and between Māori. Many examples of these genres are held in public archives or remain in private hands.

In addition, this sample list silences the enormous contribution that many allied Pākehā researchers have made to the broader field of Māori research. Māori research would not be as abundant today without the tireless commitment and courage of many of these Pākehā researchers who have forged strong and enduring relationships with Māori communities throughout the country. Therefore, importantly, the list must be read as a sample list only, focused entirely on highlighting only a limited collection of 150 non-fiction Māori-authored books.

The depth of knowledge held by Ngā Pae o te Māramatanga and its researchers has been the critical driving force for developing this sample list. The list was further compiled by using the University of Otago’s Māori library reserve collection, Te Aka a Tāwhaki, as a basis of key Māori texts across all subject areas. Further historical texts were added through use and knowledge of important resources held within the University of Otago’s Hocken Collections and the Alexander Turnbull Library.  This list has undergone peer review.  The full sample list of the 150 entries will be made available during Te Wiki o te Reo Māori 2018 and not before.

Royal Society Te Apārangi is an independent not-for-profit organisation that supports all New Zealanders to explore, discover and share knowledge. Its varied programmes provide funding and learning opportunities for researchers, teachers, school students, together with those who are simply curious about the world. To celebrate the discoveries of New Zealand researchers, the Society awards medals and elects Fellows, who are leaders in their fields. These experts help the Society to provide independent advice to New Zealanders and the government on issues of public concern. The Society has a broad network of members and friends around New Zealand and invites all those who value the work New Zealanders do in exploring, discovering and sharing knowledge to join with them.  To discover more visit royalsociety.org.nz