Voting in the general election is an important way for New Zealanders to have a say in a fair future.

Voting enables people to help determine the country’s future direction by showing their support for a party’s policies on key issues, such as climate change, taxation, and housing.

Leading up to the 2020 election, Te Tapeke Fair Futures Panel has been taking a look at voting in Aotearoa New Zealand through a lens of fairness.

If you’re a citizen or permanent resident of New Zealand aged 18 years or over, you are eligible to enrol to vote.

Since 1996, New Zealanders vote under an MMP (Mixed Member Proportional) system, which consists of two votes:

Some elections include referendums. In 2020, voters will be asked to vote ‘Yes’ or ‘No’ in these referendums:

This year, you can vote from Saturday 3 October until Saturday 17 October (Election Day).

Find out about how to enrol and vote at vote.nz

Citizens or permanent residents of New Zealand aged 18 years or over can vote.

This means that ethnic groups with relatively young populations have less of a say in Aotearoa’s future than others [1]. For example, Māori and Pacific populations have proportionally more individuals aged under 18 than other populations, such as Pākehā and Asian.

The graph below highlights the age distribution of different New Zealand population groups. European and Asian populations have a similar proportion of people under 18 years old: 22.5% and 24% respectively. In contrast, 37.6% of Māori and 39.6% of Pacific peoples are aged under 18. 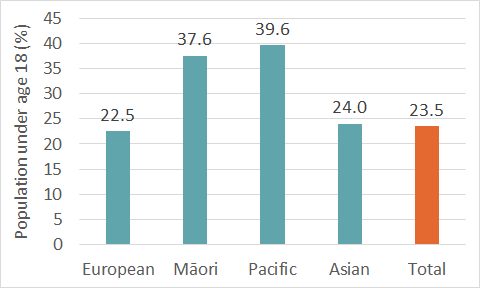 Figure 1. Percentage of the European, Māori, Pacific, Asian and total populations under the age of 18. Data from the 2018 New Zealand Census [1]. 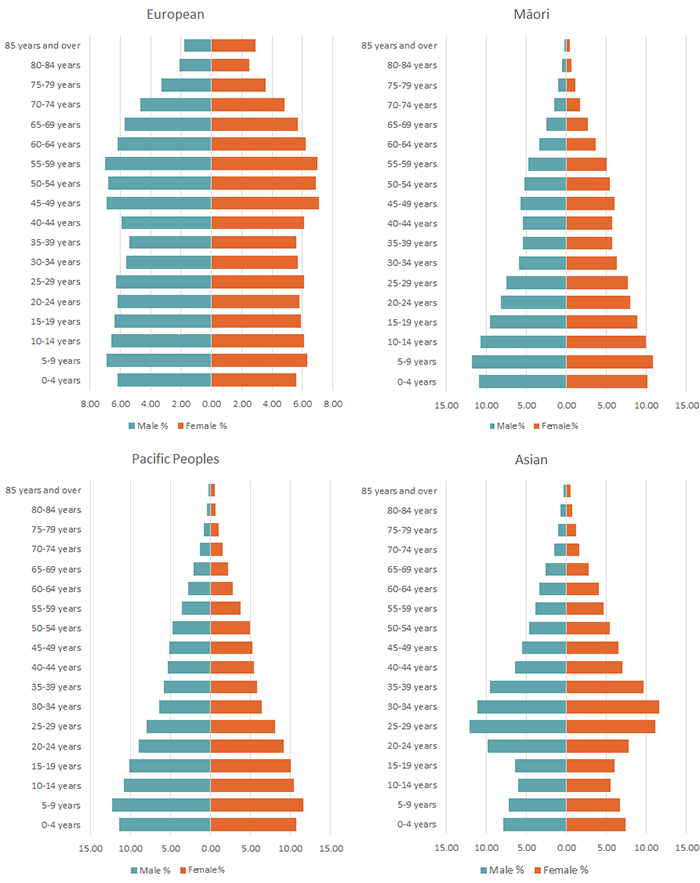 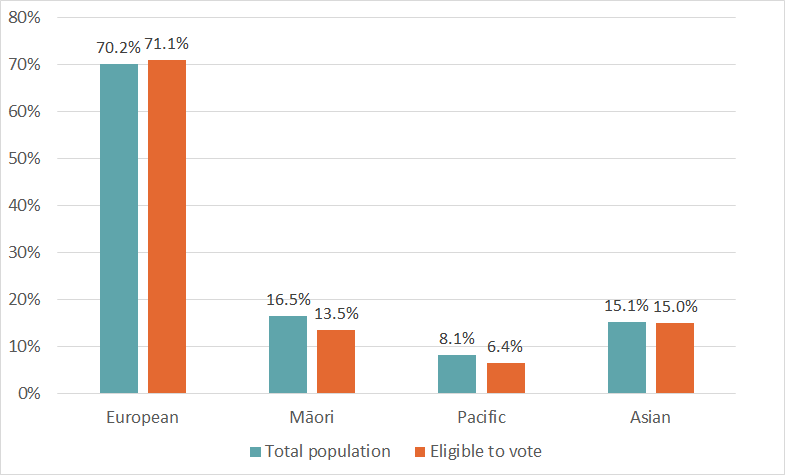 Figure 3. Share of the total population and the population eligible to vote who are European, Māori Pacific, or Asian. Totals add up to over 100% because people can identify with more than one ethnic group. Data from the 2018 New Zealand Census [1].

Is a lower voting age fairer?

Recently, there has been commentary about whether it’s fair that only those aged 18 and over can vote.

Lowering the voting age from 18 to 16 could create the opportunity to decrease this gap in voting power of ethnic groups with a younger population.

Voting on behalf of tamariki children

Some people have also suggested that parents should be given additional votes, depending on how many children they have. The idea is that this would allow them to more fairly represent the interests of the next generation. This is called Demeny Voting.

Some New Zealand citizens and residents who live overseas are eligible to vote. Over 68,000 New Zealanders living overseas were enrolled to vote as of 30 September 2020.[2]

Internationally, there is debate about whether or not it is fair for citizens and residents living overseas to vote in their home country’s elections. For example, overseas voters might not be paying tax in their home country, but their vote influences policy for the people currently living there.

Young people have an especially low voter turn-out. But income and length of time residing in New Zealand are also factors.

With this in mind, how will the global trend of aging populations in most countries affect the outcome of voting in future?

For example, some commentators have said that older people determined younger people’s future in the United Kingdom’s referendum on leaving the European Union: more old people wanted to leave than young people, and older voters voted in greater numbers.

Young and old voters may bring different perspectives to the way they vote. Young voters may vote to influence emerging issues, such as climate change, while older people may vote to protect infrastructure and systems developed during their lifetime.

By voting, young people have a stronger say in what they see as a fair future.

When we look at enrolment data from the last six elections, we can see that people aged from 18 to 29 years have the lowest enrolment rates of all the age groups. 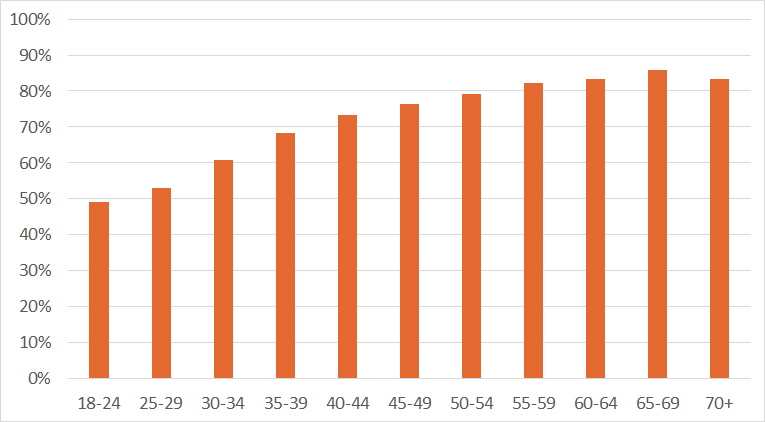 Figure 5. Voting in the 2017 election by age. Data from the New Zealand Electoral Commission and Stats NZ population estimates by age for September 2017.

Other groups that vote less

The latest General Social Survey (GSS) showed that income affected how likely a person was to vote in New Zealand, as did how long a person had lived here:

How does voter power differ by electorate?

To see how age and other factors affect electorate voting power, it is useful to compare electorates. Electorates in New Zealand are designed to contain roughly the same number of people (both adults and children). But between electorates, numbers of people who are eligible to vote, enrolled to vote, and who actually do vote vary substantially. Note that in the MMP system, it is the party vote that counts towards the number of Members of Parliament (MPs) from each party who get into parliament.

The graph below shows party votes cast by electorate in the 2017 election. There were 45,616 votes cast in the Rodney electorate on Auckland’s North Shore, which has an older population (median age 44.7). This compares with 28,024 votes cast in the – younger – Manakau East electorate,  South Auckland (median age 29.9). By casting almost 18,000 more votes, people in Rodney had a greater influence on who got into parliament than people in Manakau East – despite the two electorates representing approximately the same population size. 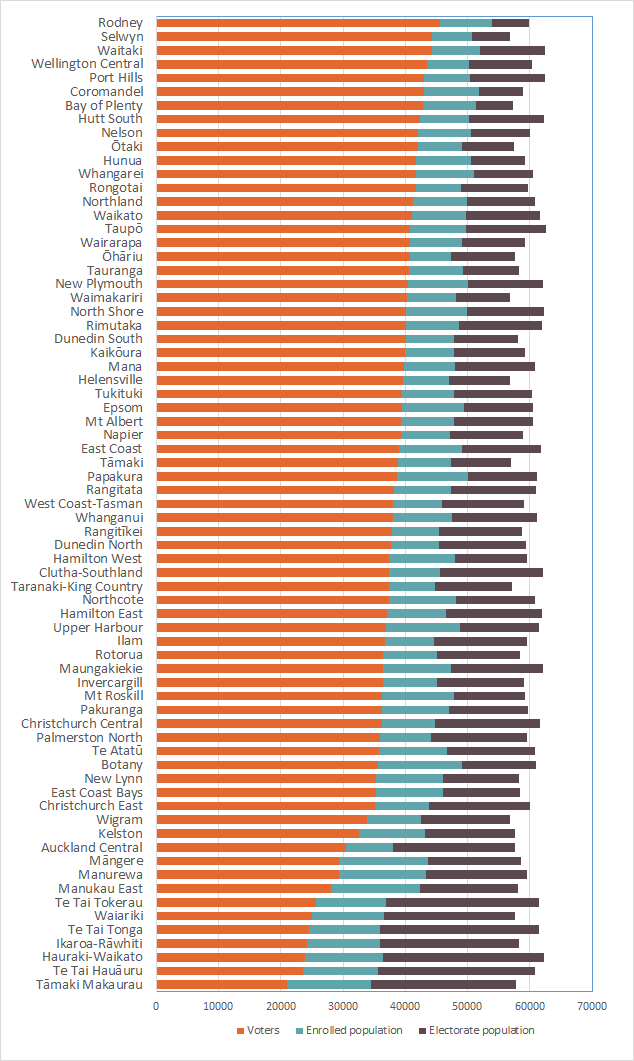 Improving voter turn-out would help reduce the difference in voting power between electorates and different ethnic groups in New Zealand. Currently, promotional campaigns encourage people to enrol and vote. Another possible approach to improving voter turn-out is to make voting compulsory – like in Australia.

Voting for a fairer future

In the past, not all New Zealanders over 18 have had an equal right to vote, with groups achieving suffrage at different times. In future, if there are calls for further changes to the voting system in New Zealand, these would also have to be approved by legislation. For example, the First Past the Post (FPP) system was changed by the Electoral Act 1993 to the Mixed Member Proportional (MMP) system we use today.

In the meantime, the most important thing is that everyone who can vote, does vote. So, if you’re 18 and over, enrol and vote in the election! Have a say in a fair future.

[1] While there are quality concerns over 2018 Census data, data on age are rated ‘very high’ quality, and the young age structure of Māori and Pacific peoples has been noted elsewhere.