About the Jones medal

About the background and design of the Jones Medal.

Design of the Jones Medal 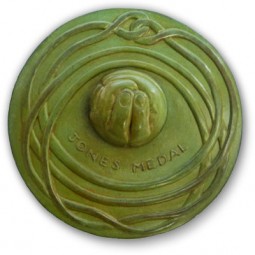 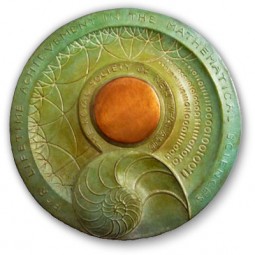 The Jones Medal was specially designed by the renowned New Zealand sculptor medalist Marian Fountain who lives in Paris. She specialises in medals.

Mathematical elements are incorporated into the design as well as a human element with the clasped hands. Marian Fountain says these hands represent the measure of thought, direction, patience and clarity required to arrive at a solution.

The knot design reflects the work on knot polynomials for which Jones won the 1990 Fields medal, with the discovery of what is now called the Jones polynomial.  The design is a knot with two different strings intertwined. Jones’  work on knots has been of interest in many areas besides its home, topology: including statistical mechanics, quantum field theory, functional analysis, group theory, abstract algebra, category theory and, surprisingly, molecular biology where it has been used to investigate the knotting of DNA molecules.

The three strings of zeros and ones are the binary expansions of the three mathematically fundamental numbers – ‘e’, ‘pi’ and the ‘golden ratio’. The golden ratio played a big part in Jones’ work on subfactors which led to the knot theory discovery.

The nautilus shell is a natural object which fits the golden ratio, a special number in mathematics. For the designer it also “represents all living things in terms of growth, like the fern frond, and in terms of change, like the cusp of a wave”.

The circles in the design represent hyperbolic geometry.

More about the designer, Marian Fountain

Born in New Zealand, Marian Fountain was introduced to the techniques of bronze casting while studying at Elam School of Fine Arts (1979-83) at The University of Auckland. In 1984, she received a major travel grant from the Queen Elizabeth II Arts Council, and travelled to London where she gained experience casting at the Royal College of Art and the Red Bronze Studio, before moving to Rome, where she studied at the Scuola della Mediglia.

Marian Fountain is a member of the New Zealand Medallion Group and has designed and made medals for the 1988 XIV Commonwealth Games, the 2003 America's Cup and for the Friends of Birmingham Museums in 2007.

She has exhibited at the British Museum, The National Gallery of Scotland, the Museo Archeologico of Milan, York Museum, Auckland Museum and the French Mint.  Her work has been displayed at the New Zealand Embassy in Paris and in London and pieces are held in the British Museum and Smithsonian Museum collections. She exhibits regularly in Europe, and has kept a continuous presence in the New Zealand art world, exhibiting here every few years.

The Jones Medal was established in 2010 in honour of Sir Vaughan Jones.

Professor Sir Vaughan Jones was the winner of the 1990 Fields Medal, often described as the ‘Nobel Prize of mathematics’ because of the prestige it carries.

Despite living overseas he was very active in the New Zealand mathematics community, making invaluable contributions to scientific research and post graduate education. He was principal founder and director of the New Zealand Mathematics Research Institute and had been running summer workshops through the institute for 15 years for students and senior researchers.