"Dying Young: Massive Dead Disk Galaxy Challenges the Picture of How Galaxies Evolve" by NASA Hubble is licensed under CC BY 2.0

What elemental ingredients went into the formation of our solar system? A new type of stardust might help answer this question

This article was originally published on the NZ Herald.

A newly-discovered type of stardust is helping scientists reveal what ingredients went into the formation of our solar system, more than 4.5 billion years ago.

The tiny mineral grains from meteorites are at the centre of just-published findings, led by Kiwi and US scientists, challenging existing models of solar system formation at the chemical level.

The research, featured in major journal Science Advances, also demonstrate the complexity of what are called "primitive meteorites" such as the well-known and studied Allende meteorite, which fell to Earth in Mexico in February 1969.

"Primitive meteorites are rare because they are the bits and pieces left flying around that haven't been incorporated into planets," said the study's co-author, Dr Bruce Charlier of Victoria University.

"So they hold clues about some of those very early processes."

Charlier said these stellar remnants were made up of a number of different components that had different histories, and were formed under different conditions.

Some of the components were actually splashes of melt formed during impacts of asteroids, but the very oldest components in the mix were called calcium-aluminium inclusions (CAIs).

"It is widely thought these were condensed from a high-temperature gas as the Sun was forming," Charlier said.

"This makes them very different from minerals you might find in an igneous rock on Earth, which crystallised from a magma."

In their paper, Charlier and his colleagues at the famous California Institute of Technology (Caltech) and the University of Chicago describe evidence of pre-solar grains found within the CAIs themselves.

This showed the process was more complex than previously thought.

Charlier and his team have been splitting the CAIs into even smaller components – or the astronomical equivalent of the Russian Matroyoshka stacking dolls.

They deploy a chemical process called step-leaching to incrementally dissolve the components of the CAIs in different strengths of acid, and then study the different fractions using a thermal-ionisation mass spectrometer.

"Step-leaching is a little bit of a blunt instrument because you are not entirely sure what exactly it is you are destroying at each step," he said.

"But the nub of what we've found is, once you have stripped away 99 per cent of the common components within the CAIs, what we are left with is something highly exotic that we weren't expecting.

"Those highly resistant materials are, we think, tiny pre-solar grains pre-dating our solar system, because when you measure their isotopic and chemical composition on the mass spectrometer they are very, very different to anything else you find.

"Pre-solar grains have been isolated from the matrix of primitive meteorites before. But what we have found is that pre-solar grains are preserved within the CAIs and are actually quite different."

Many carried unusually high amounts of strontium-84, or Sr-84, which was a relatively rare light isotope of the element strontium that is so-named for the 84 neutrons in its nucleus. 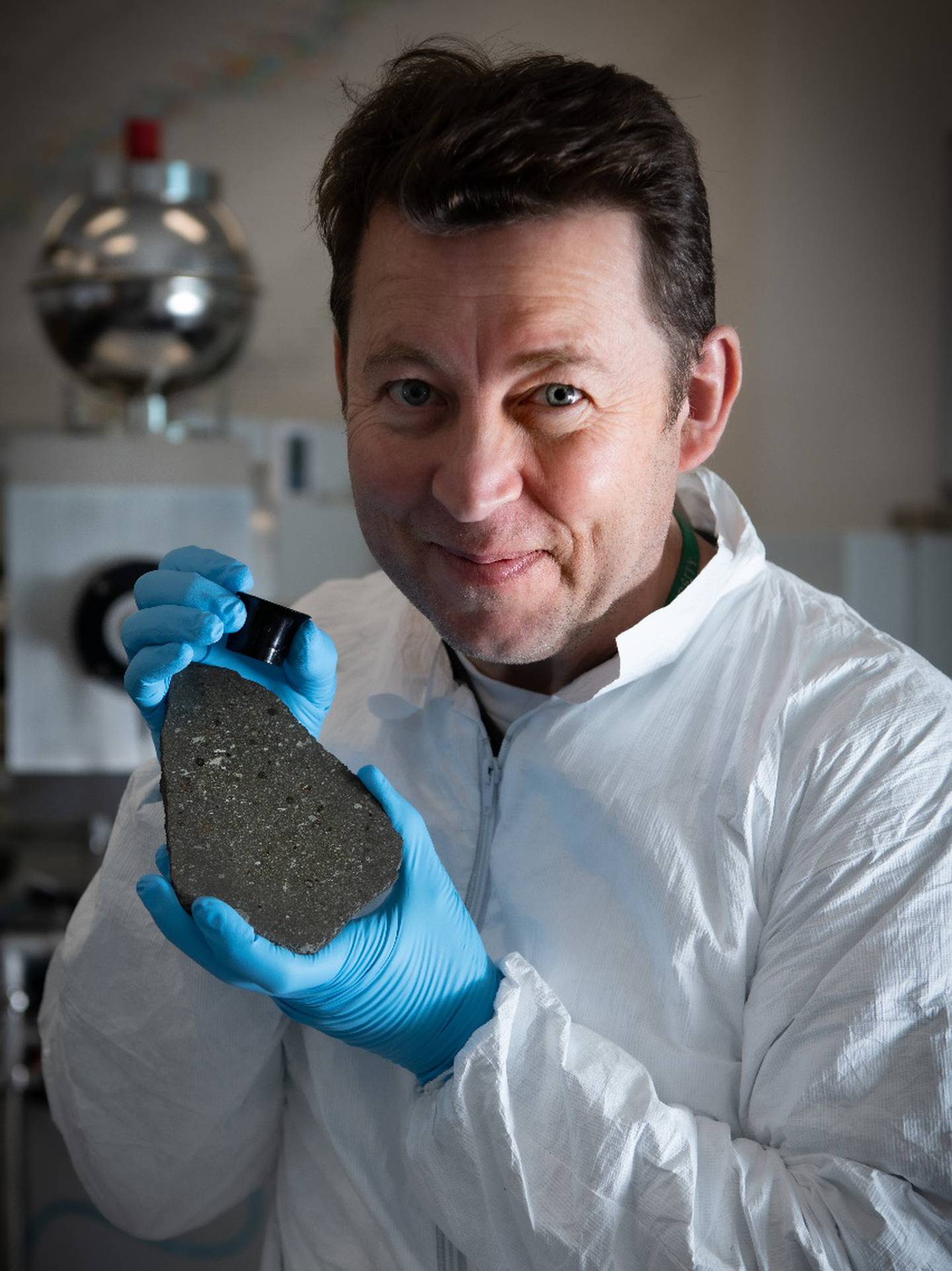 Victoria University scientist Dr Bruce Charlier, with a slice of the Allende meteorite. The white pieces are calcium-aluminium inclusions and estimated to be 4.567 billion years old. Photo / Victoria University

"Strontium-84 is part of a family of isotopes produced by a nucleosynthetic process, named the p-process, which remains mysterious," said co-author and Caltech geochemist Associate Professor Francois Tissot.

"Our results point to the survival of grains possibly containing pure strontium-84. This is exciting, as the physical identification of such grains would provide a unique chance to learn more about the p-process."

Charlier added: "This is really interesting. We want to know what the nature of this material is and how it fits into the mix of ingredients that went to form the recipe for the planets."

Tissot said the signature embedded in the grains was like anything else found in the solar system.

The grains carrying this signature, the researchers concluded, must have formed prior to the birth of the solar system and survived that cataclysmic process during which stellar grains were heated to extremely high temperatures, vaporised, and then condensed into solid materials.

Given the relative abundance of strontium-84, the discovery pointed to the likely existence in meteorites of nanometre-sized grains containing almost pure strontium-84 that were formed during a rare nucleosynthetic process before the formation of the solar system itself.

The nature of these grains was still a mystery, as only their isotopic composition in strontium revealed their existence.

But the high levels of Sr-84 favoured a scenario in which Earth accreted with more water and volatile elements, which were subsequently lost within the first few million years after their formation.

Charlier's research was being supported by a $624,000 Marsden Fund grant.

VUW2009: 'The recipe for our solar system: Investigating the raw ingredients in the oldest meteorites'