Sea ice breaks out in McMurdo Sound, letting in the light that allows microscopic algae to flourish in the surface ocean. PHOTO: Christina Riesselman.

A 170m-long record of marine sediment core from Antarctica is yielding new insights into the complex relationship between sea ice, the productivity of marine plankton, and climate change.

In a study published in Nature Geoscience, a team led by researchers at GNS Science, Te Herenga Waka–Victoria University of Wellington, and the University of Otago have collaborated with international scientists to show that Antarctic sea ice has had a tight connection to both Southern Ocean algae blooms and El Niño-linked weather events over the past 12,000 years.

Funded partly by the Royal Society Marsden Fund, the team found Antarctic winds strongly affect the breakout and melting of sea ice, which in turn has an effect on the amount of microscopic algae that grow in surface waters.

Changes in algae growth in the waters surrounding Antarctica can have an impact on Antarctic food webs, and they also play a major role in the global carbon cycle.

The Adélie Land cores from the Integrated Ocean Drilling Programme are uniquely striped like a barcode, which allowed the scientists to use techniques such as CT (computed tomography) scan-imaging and analysis of microfossils and organic biomarkers to examine the relationship between sea ice and large algae growth “bloom” events at annual timescales.

Their findings, produced in partnership with researchers from France, Spain, Japan, the United Kingdom and the United States, have provided unprecedented detail of these relationships. 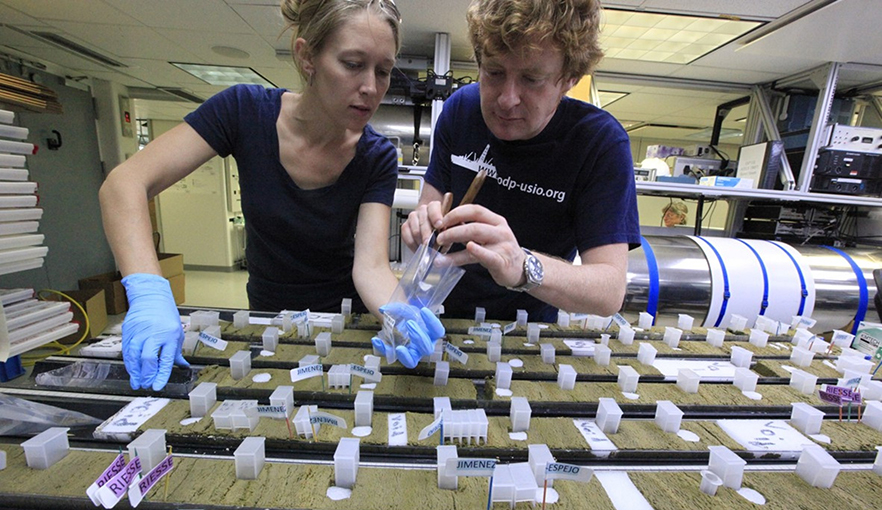 Co-authors Christina Riesselman (University of Otago) and James Bendle (University of Birmingham) sample the Adélie cores on board the JOIDES Resolution, shortly after they were collected in 2010. PHOTO: International Ocean Discovery Program.

The researchers found algal bloom events occurred nearly every year prior to 4500 years ago. However, they then became less frequent, occurring every two to five years – a frequency similar to El Niño Southern Oscillation (ENSO) climate events.

They attribute this shift in biological productivity to an overall increase in sea ice levels along the coast of Adélie Land that prevented annual sea ice breakout, providing evidence that ENSO and other climate modes influence multi-year sea ice breakout events.

Lead author on the paper Katelyn Johnson, of GNS Science, says the relationship between sea ice, climate variability and primary productivity is complex.

“While sea ice that persists from year to year can prevent these large algal blooms from occurring, sea ice that breaks out and melts creates a favourable environment for these algae to grow. These large algae ‘bloom events’ occur around the continent and form the base of the food webs, and act as a carbon sink,” Dr Johnson says.

“Unlike the Arctic where rising temperatures have led to reduced sea ice, the relationship in the Antarctic is less clear, as is the subsequent impact on primary productivity. Our new record provides a longer-term view of how sea ice and climate modes like ENSO impact the frequency of these bloom events, allowing climate modellers to build more robust models.”

“After seeing a trend of gradually increasing sea ice in Antarctica over the last few decades, there has been a very rapid reversal in this trend recently with record lows in 2017. Our new results suggest such changes will have a significant impact on Antarctica’s coastal biological system,” Associate Professor McKay says. 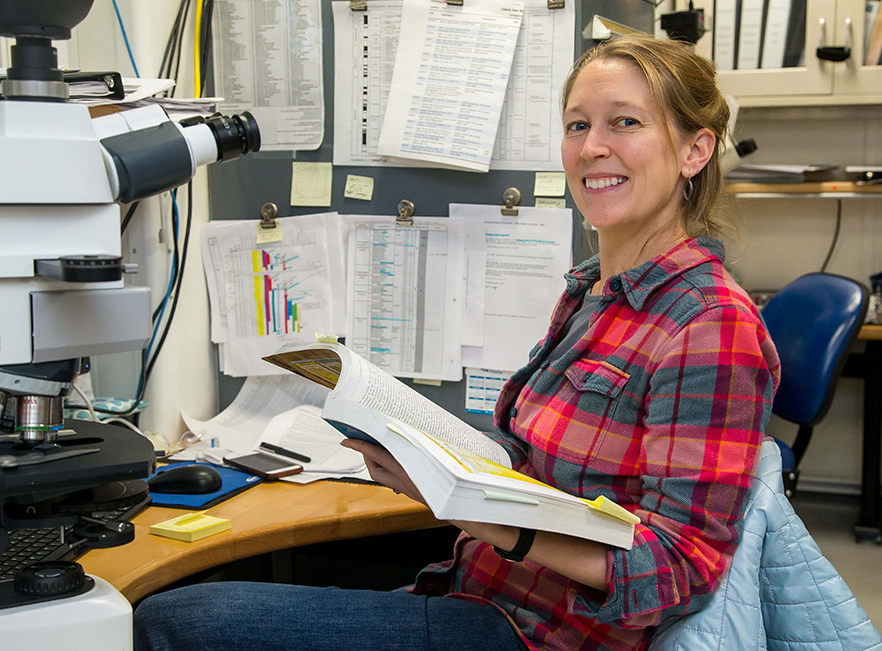 “We know Earth’s climate system is dynamic and complex, and that distant regions of our planet are closely connected to one another through climate processes. What we don’t fully know is how durable those connections will be in the face of climate change,” Dr Riesselman says.

“Our new work demonstrates that sea ice amplifies the connection between the equatorial Pacific and this sector of the Southern Ocean. But the connection is lost when sea ice is absent, and the consequences for polar biology could be significant.”

She says that with strong action to curb climate change, we hopefully won’t have to confront those consequences.

VUW1507 "Predicting a sea change: Antarctic ice-ocean interactions in a warming world" and VUW1808 "Antarctic Ice Sheet interactions with the ocean during past warm climates"