Home Research Updates Under the moonlight: a little light and shade helps larval fish to grow at night

Under the moonlight: a little light and shade helps larval fish to grow at night

At night on any one of hundreds of coral reefs across the tropical Pacific, larval fish just below the sea surface are gambling on their chances of survival

Our latest research shows the brightness of the Moon could play a major role in that struggle for survival by affecting the availability of prey and keeping predators away.

Understanding how that works could help in fisheries management, specifically the prediction of changes to harvested fish stocks that allow us to anticipate how many adult fish can be taken without destabilising the fishery.

The large number of larval fish that are produced means any environmental conditions — for example, increased nutrients — that improve survival odds even only marginally can lead to a big influx in the number of surviving offspring.

When the Sun goes down

In the past we failed to take into account the influences the night may have on fish development.

In our research we found the daily growth rates of the larvae of sixbar wrasse (Thalassoma hardwicke) around the island of Mo’orea, in French Polynesia, are strongly linked to phases of the Moon.

Cloudy nights obscure the Moon, and thus allowed us to check our models by contrasting growth on cloudy versus clear nights, which confirmed the effect of moonlight on growth of these fish.

Phases of the Moon

We found that on the best nights of the lunar month for sixbars, around the last Quarter Moon when the Moon rises around midnight, larval fish grew about 0.012mm a day more than average.

But on the worst nights, around the first Quarter Moon when the Moon is overhead at sunset and sets around midnight, they grew about 0.014mm a day less than average.

Phases of the Moon from the Southern Hemisphere. Wikimedia, CC BY-SA.

For a typical larval sixbar of 37.5 days old, that means its growth is 24% more on the best night than on the worst one. This is important, as growth is inextricably linked to survival and ultimately fisheries productivity.

We think the Moon affects larval growth in this way because of how it changes the movements of deeper-dwelling animals, those that migrate into shallow water each night to hunt for food under the cover of darkness.

Zooplankton — potential prey for larval sixbars — respond quickly to the arrival of darkness, and move into the surface water to supplement the diets of sixbars.

Micronekton, such as lanternfishes, which hunt larval fishes, may take much longer to reach surface waters and seek out their prey, due to their migration from much deeper depths. 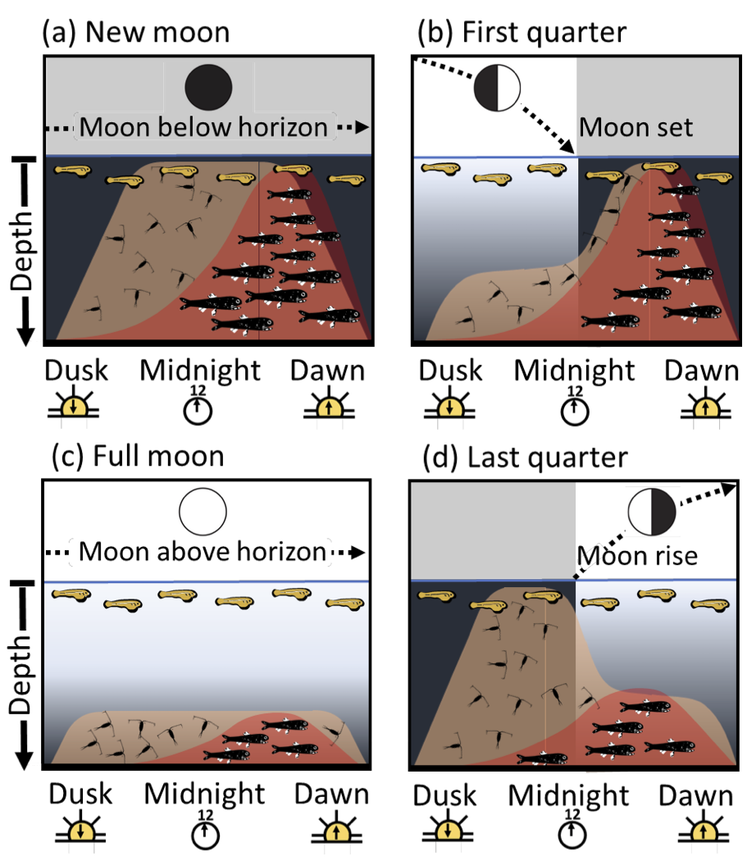 Four graphs showing the larval fish (in yellow) and the amount of predator (red shading area) and prey (brown shading area) rising to the surface during each phase of he Moon. Proceedings of the Royal Society B, Author provided.

Thus, larval fish grow best when their predators are absent but their prey are abundant — around the last Quarter Moon.

In contrast, around the first Quarter Moon, prey are suppressed but predators are not, leading to the slowest growth.

During the New Moon, when the surface waters remain dark throughout the night, influxes of both prey and predators may be high, with the latter preventing the larval fish from enjoying the increased numbers of prey.

On the other hand, during the Full Moon, when surface waters are well-lit, the movement of prey and predators may be suppressed, reducing the risk to the fish but also eliminating their food.

More research is needed to quantify these lunar effects on other marine populations. But our findings to date are good news for those working to strengthen fisheries management, given that phases of the Moon are predictable and cloud cover that can modify moonlight is being measured by satellites. 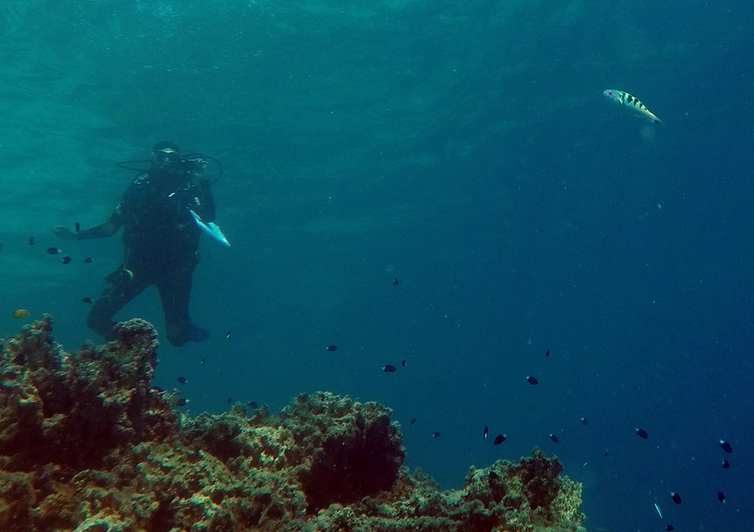 This makes the incorporation of moonlight into existing fisheries management models relatively simple.

We think this will have implications around the world, not just in the tropics. This is because the nightly upward movements of deep-water animals is ubiquitous — it is the largest mass migration of biomass on the planet, and it happens everywhere.

The suppressive effect of moonlight on this movement of potential predators and prey is also a global phenomenon.

We evaluated effects of the Moon on growth of larval temperate fish in an earlier study and found a similar effect (moonlight enhanced growth).

The effect is stronger and more nuanced in our latest study, most likely because the waters in the tropics are comparatively clear.

Our findings also hint that other factors which affect night-time illumination of the sea may disrupt marine ecosystems. This includes the reflection of artificial lights from coastal cities, suspended sediments in the water column, and changes in cloud cover due to climate change.

In the future, we may be able to harness this extra information to help forecast fish population change to better guide the management and conservation of fisheries around the world.

VUW1503: 'Born at the right time? Disentangling the effects of birthdate and developmental trajectories on fitness, population dynamics, and the evolution of life-history strategies'