Volcanoes make waves too: a new understanding of tsunamis generated by volcanic eruptions

Tsunamis are most commonly generated by underwater earthquakes that rapidly deform the seabed, but they can also be caused by eruptions from submerged or near-shore volcanoes. While volcanic tsunamis are infrequent, they are dangerous – inflicting 25% of volcanic deaths in historical times. For example, almost all of the 36,000 deaths from the 1883 eruption of Krakatau, Indonesia, were due to the tsunami it generated; many of these were in the city of Jakarta, over 100 kilometres away. In Aotearoa New Zealand, tsunamis generated from volcanic eruptions pose a significant threat to our largest city, Auckland, which sits atop an active volcanic field that erupted as recently as approximately 550 years ago. Likewise, the Taupo Volcanic Zone hosts numerous water-filled calderas, many of which have on-shore and underwater volcanoes that pose a tsunami hazard for local communities, including the largest, Lake Taupō.

Volcanic tsunamis differ from seismic (earthquake-generated) tsunamis in that the waves can be generated by a range of phenomena: an explosive eruption, pyroclastic flows (hot, dense mixtures of gas, ash and rock fragments), and caldera or flank collapse, amongst others. These different generation mechanisms lead to different wave characteristics, which in turn determine how far a tsunami travels and its destructive power when it arrives. By understanding these different mechanisms we can better predict and prepare for possible future volcanic tsunamis. 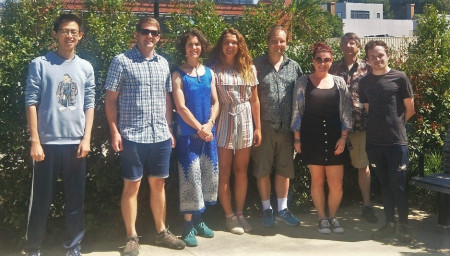 Towards this aim, Dr Emily Lane (NIWA) and Dr William Power (GNS) are leading a team of researchers and PhD students to better understand how explosive eruptions and pyroclastic flows generate tsunamis. Naturally, actual volcanic eruptions are not possible to replicate in the lab, so the team is using scaled-down experiments in wave tanks and computer simulations that provide simplified proxies to mimic their behaviour. Using compressed air to model underwater eruptions, they have shown that for a given eruption strength there is a critical water depth at which the maximum waves are generated (Figure 2); eruptions deeper than this are supressed by water pressure, while shallower eruptions blast through the water surface and lose their energy to the air. Similarly, eruptions with longer durations have the potential to generate larger, more hazardous waves only up to a point; after this wave size doesn’t change. To mimic pyroclastic flows, compressed air is used to fluidise small glass beads into motion. These flows speed down a ramp into the wave tank, where they displace significant volumes of water and generate a solitary-like wave of water (Video 1). Numerical modelling suggests that to accurately simulate the magnitude of waves created by pyroclastic flows, characterizing the friction at the bottom of the flow is key. Work is also being undertaken to mathematically model the behaviour of volcanic waves after they are generated. 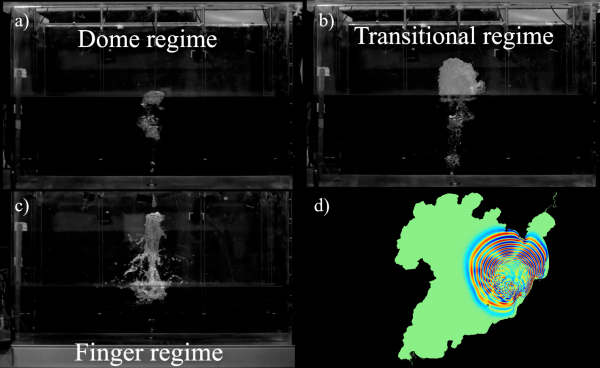 Figure 2: Results from laboratory experiments of compressed air ‘eruptions’ using different strengths for the same water depth. The critical water depth, which leads to maximum wave generation, occurs for eruption strength between the dome regime (a) and the transitional regime (b). Finger regime style eruptions are shown in panel (c). Panel (d) shows the wave field from a simulated eruption on the north-eastern edge of the Horomatangi Reef approximately 5 minutes after the eruption. Red represents positive waves and blue negative waves. Figure provided by Dr Emily Lane.

By combining physical and numerical models of volcanic eruptions with historical tsunami results, this team of researchers are improving our understanding of volcanic tsunamis and our ability to accurately replicate them. They continue to test various experimental parameters; for example by using compressed steam instead of air and using a mixture of sizes of the glass beads to more accurately reproduce pyroclastic flows. Collectively, their work is helping to define the hazard volcanic-derived tsunamis pose in Aotearoa New Zealand and around the world. 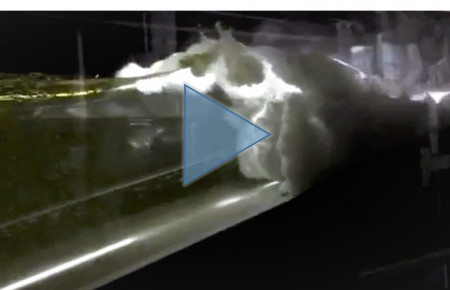