How do parasites brainwash their hosts?

Many parasites can change the behaviour of their hosts. For example, malaria parasites may make mosquitoes more attracted to humans, increasing the chance of transmission, and toxoplasma parasites make rats more likely to hang out around cats, increasing their chance of being eaten (which passes the parasite to the cat where it can reproduce).

One of the most extraordinary manipulations is the water-seeking behaviour that some parasitic worms induce in their hosts. These worms hijack the host’s central nervous system, forcing them to seek water for the worm to reproduce in. Once water is found the adult worm explodes out of the host, killing it.

The mechanisms behind such amazing host manipulations are not well understood, but one possibility is through alteration of the host’s DNA (epigenetics). However, water-seeking behaviour is induced by several distantly related worms in a variety of hosts, meaning that a common and conserved mechanism may be utilised by these parasites.

A Marsden Fund grant will support Professor Neil Gemmell from the University of Otago’s Department of Anatomy to investigate such parasitism. Along with his Otago-based team, Professor Gemmell will use cutting-edge molecular and bioinformatics tools to study two distantly-related parasitic worms and their hosts – one affecting cave weta, the other affecting earwigs. They will attempt to discover the trigger and genetic cascade through which these parasites elicit this behaviour.

Results of this study will increase our understanding of how parasites can brainwash their victims. Although the project will look at parasites that affect insects, the findings will be broadly relevant to many other parasite systems, including those that affect humans and livestock. 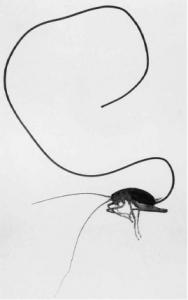 A hairworm coming out of a Weta. Photo by Frederic Thomas

For more about Parasites, see this Ted Ed video…