Dr Jodie Johnston with their front cover scientific paper in the journal Structure with (from left to right) her Marsden Grant co-principal investigator Dr Ghader Bashiri; lab manager Ehab Jirgis, whose Masters of Science work formed the basis for the initial work in the Structure paper; and Ms Laura Nigion, who will be funded to work on the Marsden Grant project. Missing are Dr Esther Bulloch, and the University of Canterbury’s Dr Wanting Jiao

Dr Jodie Johnston, her co-Principal Investigator Dr Ghader Bashiri, and their Maurice Wilkins Centre colleagues based at the University of Auckland’s School of Biological Sciences were investigating an enzyme which is an important drug target and essential to Tuberculosis, a disease that still kills about 1.3 million people every year. In a world-first, the team were able to capture and visualize the enzyme intermediates for each stage of the reaction, determining the changing structure of the protein as the reaction progressed. But they also found something much more fundamental, something which has now earned the young group a prestigious Marsden Fund grant, something that can help us understand how the processes that control life work.

The enzyme – called MenD – sits at the start of a pathway of enzymes that between them help make Vitamin K (also called menaquinone). Vitamin K is vital for respiration in M. tuberculosis, the bacterium responsible for the disease Tuberculosis. This vitamin is so important to the tuberculosis bacterium it keeps making it even when in its “slowed-down” persistent state (a state associated with latent TB infection that affects approximately 1/3 of the world’s population).  The group were trying to understand more about the chemistry of the MenD reaction, which goes through several intermediates on the way to making its final product. To do this, they had to grow crystals of the protein, scoop them up with a tiny loop under the microscope, freeze them with liquid nitrogen, then use X-ray crystallography to actually resolve the 3D structure of the enzyme bound to the key intermediates involved in the reaction progression. “These techniques are things we do all the time. But we don’t normally manage to capture these reactions in progress and see these intermediates, because they’re so unstable,” says Dr Johnston.

With luck and persistence, the team managed to capture first one and then another intermediate stage of the reaction over a couple of years. “It was beautiful to see, and transformative to understand what was going on,” says Dr Johnston. “It was one of those moments where you say: this is why I’m doing science, this is amazing.”

That work earned them the front cover of the journal Structure in July of this year, with artwork showing the parts of the reactions they found. But getting published wasn’t an easy process either. Dr Johnston remembers writing notes up for an early version of the paper at seven o’clock the night before she gave birth to her youngest child. The paper went through many iterations since then, including incorporating new data the group obtained and developing and refining their ideas. Her daughter is now nearly three. Aiming very high, the first journal they tried rejected the paper, and scientific review was a long process. “It is such a big body of work and in making it all come together, which it did in the end beautifully, it felt like a baby of its own,” says Dr Johnston.

Something else the team discovered when they looked at the structures was that the enzyme only had two out of its four active sites working at any one time. It’s more usual for proteins to use every site, and you’d expect using more would be better for the bacterium that causes the disease. The team wonder, says Dr Johnston, whether tightly controlling the enzyme helps the TB bacterium survive inside humans and evade the immune system defences. But as yet, they don’t know: “We don’t know what the biological significance of it using two sites is and we don’t know how it tells two of its sites not to work – we don’t understand what advantage that has. The enzyme has to be able to talk to its sites somehow and we want to be able to understand how that happens,” says Dr Johnston. “If we can understand that, then we can understand some quite fundamental things about proteins.” 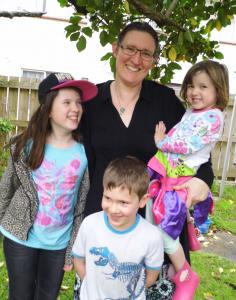 Jodie with her three children, the youngest of whom was born the day after she spent an evening writing up notes for the paper that came out in Structure this year

This process is called protein cooperativity, where molecules binding to a protein affect its activity at a different site. It allows proteins to alter their functions and influence how organisms adapt to environmental changes, and is therefore a crucial phenomenon that underpins life. Dr Johnston and three other early career researchers (Dr Ghader Bashiri, Dr Wanting Jiao and Dr Esther Bulloch) with mentoring support from senior colleagues, formed a team and applied for a Marsden Fund grant to use their protein as a model system to understand protein cooperativity more generally. This year they won funding worth $870,000 to carry out the work over three years.

Using a multidisciplinary approach including molecular biology, biophysics, structural biology, and computer simulations, they’ll try to build a picture of the different factors that underlie this protein communication. As well as providing insight into Tuberculosis, their discoveries will help build a knowledge base which could be applied in many areas where proteins play a role including understanding human and animal health, drug-design and biotechnology.

“This is beyond transformative for me,” says Dr Johnston. She’ll be able to work with scientists she admires in international collaborations, further build her professional reputation, develop and challenge her scientific abilities. “I’ve got the resources to ask the questions I want to ask,” she says. At the very least the funding means Dr Johnston can keep doing research for another three years.

That isn’t trivial. Dr Johnston and her colleagues haven’t got permanent jobs; she is still on a short-term contract. Before their funding success was announced, one of the team was thinking about leaving New Zealand. All of them are early career researchers, three of whom are women juggling their careers with their small children.

“Often we lose females when they want to start a family,” says Dr Johnston. “It’s not easy. Science is highly competitive. I have three children and I have to get the bus home at 4.00 pm and get my children to bed before finishing up the remaining work for the day.” But all that juggling, and all that balancing, has paid off with getting a Marsden Grant. “It’s great validation for doing good science, because the Marsden Fund process is so rigorous and robust,” says Dr Johnston. And with more Government money going into the Fund, she adds: “We get to keep our talent. Just think how many more people are going to be able to continue doing good science.”