Images show several pillars within the Carina Nebula, observed & studied with MUSE on ESO’s Very Large Telescope. The massive stars within the star formation region slowly destroy the pillars of dust and gas from which they are born. Credit: ESO/A. McLeod

Dr Anna McLeod from the University of Canterbury will explore how the largest stars in our universe reshape their surroundings, and even trigger the formation of new stars 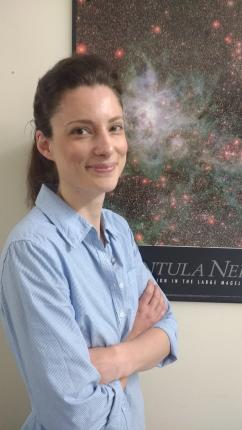 No star is an island. Stars are not isolated systems that live their lives without interacting with their surroundings. This is particularly the case for the most massive stars―which are stars greater than eight times the mass of our own sun. Throughout their life these huge stars ‘feedback’ into their surroundings by emitting massive amounts of ultraviolet radiation and belching super strong winds, ionizing and heating everything around them. Even in death, they are spectacular; creating a massive explosion called a supernova that can both trigger and suppress the formation of other stars in the neighbourhood.

The physics of massive star formation and the redistribution of mass, energy, and metals throughout the stars’ lifecycle, are the missing ingredients required to connect the galaxies that we observe today to models of galaxy evolution.

Dr Anna McLeod, from the University of Canterbury has been awarded a Marsden Fund Fast-Start grant to study the feedback from massive stars. With researchers from Germany and the United Kingdom, she will determine how these stars regulate the formation of other stars, and hence the development and growth of galaxies.

Using some of the newest and largest telescopes in the world, Dr McLeod will describe the features of several massive stars. She will dissect nearby galaxies into tiny regions and obtain high-quality spectra for each, thereby gaining valuable insights into massive star feedback in action.

Findings from this study will provide the observational platform needed to significantly advance our understanding of one of the most important astrophysical processes in the universe.