Associate Professor Craig Stevens from NIWA will explore how heat and energy are transported through the turbulent waters of Cook Strait, to help understand how our planet’s oceans are warming 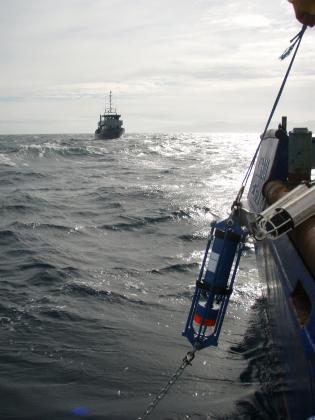 Ninety percent of the solar heat captured by the planet is stored in the oceans. Understanding the processes that transport and mix this heat is vital for predicting its transfer around the globe, and thus our climate. The efficiency of ocean mixing has been determined for areas with low-to-moderate turbulence. However, we are yet to understand and describe the efficiency of mixing in regions with extreme turbulence.

The Marsden Fund has awarded Associate Professor Craig Stevens, of the National Institute of Water and Atmospheric Research (NIWA) and the University of Auckland, a grant to quantify the efficiency of mixing in the Cook Strait under a spring tide ― ocean conditions that are amongst the most turbulent in the world. This project has been dubbed Project Cookie-Monster (Cook Strait Internal Energetics Monitoring and Synthesis), a name that alludes to the monstrous conditions in which sampling will take place.

Associate Professor Stevens, colleague Dr Joe O’Callaghan and researchers from Australia and USA will use the latest technology, including ocean gliders and autonomous profilers, to develop a better way to represent mixing in the ocean. Drifting turbulence-measuring robots will then be deployed into the massive Antarctic Circumpolar Current to look at how this understanding holds up in the largest ocean current on the planet.

In demystifying the processes involved in ocean mixing in highly turbulent areas, Project Cookie-Monster will help to quantify a fundamental parameter in modelling ocean fluids and thus improving our ability to estimate the distribution of heat around the globe.