Home 150th Anniversary Past and future Beyond palaeoclimate: new horizons for cave science

In 2006, Gideon Henderson wrote in Science Magazine: “For paleoclimate, the past two decades have been the age of the ice core. The next two may be the age of the speleothem”. Looking back, the Oxford-based geochemist’s prediction could not have been more accurate. In 2017, speleothem – or cave formation – records have emerged as the premier records of past climate in on-land settings. Just last year, Hai Cheng and others in Nature published the best-dated and most highly resolved record of glacial (cold and dry) to interglacial (warm and wet) climate oscillations from the last 640,000 years based on Chinese stalagmites. These records are accurately tied to time through exquisite measurements of radioactive uranium and thorium isotopes―something no other environmental archive can match.

The climate-centred focus of Henderson is still relevant, and remains the most important facet of speleothem science, one which has still much to tell us about past and future climate states. Yet, as we approach the end of the second decade of the twenty-first century, the comparison to ice cores seems less relevant, as the science of speleothems comes into its own and the breadth of cave science comes into focus.

New Zealand is perhaps the perfect location in the world to explore these diverse research paths, and to answer questions of genuine societal relevance. Our remnant of Gondwana is practically riddled with caves – a world-renowned caving destination where the bold explore new subterranean worlds, places where literally no human has set foot. Twisted by tectonics and pock-marked by volcanism, our caves also keep the secrets of New Zealand’s geological, climatic and ecological evolution.

We pick up this story at the beginning of New Zealand cave science. It’s the 1960s and the field of isotope geochemistry is beginning. Technology inherited and developed from war-time nuclear scientists is starting to come into the hands of chemists and earth scientists in research institutions, and New Zealand is an early forerunner in the application of this technology.

One young pioneer in this field is Chris Hendy. Recently graduated from Victoria University of Wellington, he carries out a series of highly novel isotope measurements on cave carbonates, pens a seminal paper in the field (Hendy, 1971), and then, from the perspective of many speleothem scientists, disappears from view (though not underground!). While Hendy pursued other interests, in particular the burgeoning field of Antarctic science, others picked up his mantle and proceeded to apply his ideas to reconstruct past climate variations from speleothems. As an indication of the impact of his 1971 study, it has now been cited 900 times (Scopus) and the term ‘Hendy Test’ remains common parlance in the field some 46 years later, remaining a central concept.

In 2012, when Chris Hendy retired, I was fortunate to be on the spot and was appointed as a lecturer in geochemistry at the same institution. Not long afterwards, another early pioneer of New Zealand cave science, Paul Williams (University of Auckland), also retired, leaving behind a substantial scientific legacy, as well as a treasure trove of cave specimens collected from across New Zealand.

As we approach the end of the 2010s, the future scope of the field of cave research and speleothem science is starting to come into clearer view. While much is yet to be learned from cave deposits about Earth’s past climate states, particularly in the Southern Hemisphere, which has a dearth of high resolution climate records, we realise the potential of New Zealand caves to tell us so much more.

For example, Vaks and others have shown us the power that simply dating speleothems has to reveal the dynamics of the frozen permafrosts of the north. The scope of cave science isn’t limited to stalagmites: for example, Slon and others publishing this year in Science Magazine demonstrated the capacity of cave sediments to preserve Neandertal and Denisovan DNA.

Our own Marsden Fast-Start project is capitalising on the wide distribution of caves in New Zealand as well as its comparatively pristine landscapes to understand the natural function of soils. In particular, we are asking how soils lose carbon through leaching (loss to groundwater), a question which requires a long-term perspective and which is not resolvable by any other natural archive (Fig. 1). This organic carbon is capable of being degraded (mineralised) back to CO2, thereby contributing to the atmospheric burden of this important greenhouse gas. This is the topic of Andrew Pearson’s PhD research and we look forward to sharing the results of this work in the coming year. 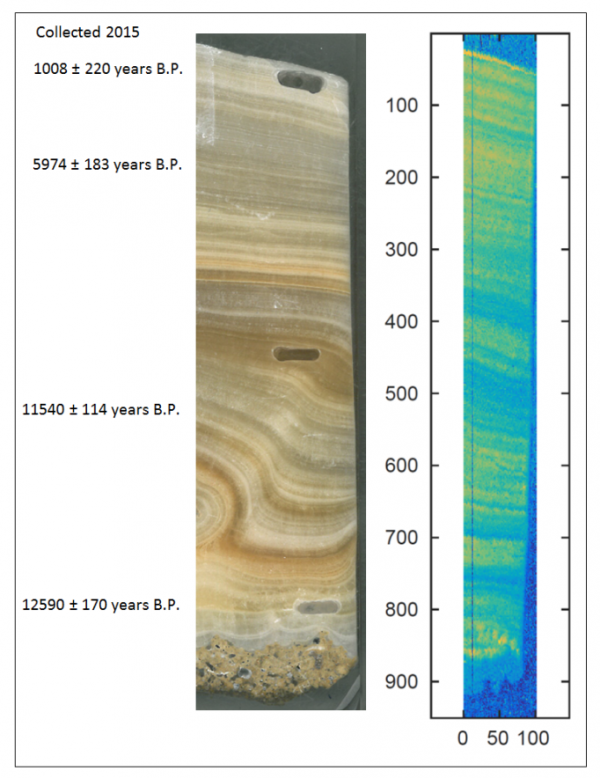 New Zealand with its dynamic landscapes is a place where the traces of past disturbances can be lost. This is particularly the case for earthquakes, much of the evidence of which is lost on timescales of centuries to millennia due to surface erosion. Caves, on the other hand, may record evidence of past ground shaking for millions of years (Figure 2). 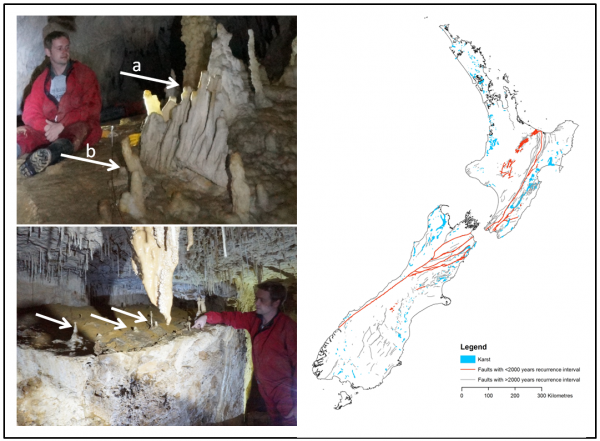 Caves can also inform our understanding of another prominent natural hazard – volcanism. Much remains to be understood regarding the evolution of New Zealand volcanism, its links to tectonics, and the effects of super-eruptions on regional and global climate―the topic of a recently funded Marsden award to researchers at The University of Auckland (Fig. 3).

Figure 3. Plot of boron concentrations in a Hawkes' Bay speleothem (7,400–600 yr ago). Large spikes in this and other elements (10–1000 times ambient levels) correspond to known Taupo and Mayor Island eruptions (others are Taranaki eruptions). The Taupo 232 AD eruption spike dates to within 10 years of its known eruption ages, however, the other eruptions are dated ten times better than existing radiocarbon constraints. This is the first speleothem record obtained of prehistoric New Zealand eruptions (Joel Baker, unpublished data).

Perspectives on the function of surface ecosystems and soils (and human induced changes), the occurrence of sporadic extreme events (e.g. fires, floods, volcanic eruptions, earthquakes), climate from seasons to millennia (e.g. El Niño-Southern Oscillation dynamics), archaeological science and much more can be informed by cave records. While speleothems aren’t a panacea, and other environmental archives have their advantages, it is clear that over the next few decades these unique archives of the Earth will have much more to reveal. 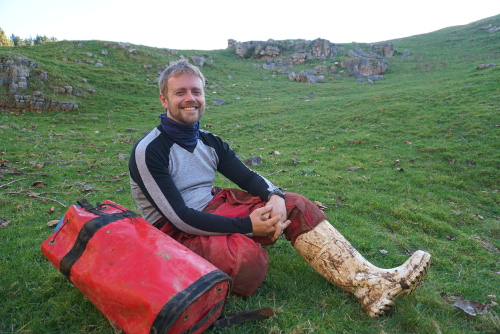 The isotopic geochemistry of speleothems—I. The calculation of the effects of different modes of formation on the isotopic composition of speleothems and their applicability as palaeoclimatic indicator, C.H Hendy, Geochimica et Cosmochimica Acta, Vol. 35, Issue 8, August 1971, Pages 801-824.