Aerial view of Mount Ruapehu from the southeast, showing the Wahianoa River flowing through a glacial valley that is bordered by tall moraine ridges. Tongariro and Ngauruhoe can be seen to the north. Photo by Dougal Townsend, GNS Science.

Mount Ruapehu may be part of the ‘Pacific Ring of Fire’, but it has had a very icy past. With a summit height of 2797 metres above sea-level, Ruapehu gets dusted by snow during the winter months. More importantly, the presence of deep valleys, tall moraine ridges, and scoured lava flows indicates that large volumes of ice formed glaciers on the slopes of Ruapehu in the past. Previous studies inferred that New Zealand’s tallest volcano grew in size as lava flows were piled up during discrete periods of clustered eruptions throughout its 250,000 year-long history1. These ‘growth spurts’ were thought to have been separated by periods of intense erosion when glaciers carved out the deep valleys on the flanks of the volcano2. However, many lava flow ages in fact coincide with the periods when large glaciers were thought to have been present on the mountain. This presents a problem: how does a volcano grow if it is covered in ice?

From experiments and historical observations, scientists have identified a curious feature of eruptions that occur at icy volcanoes: hot lava flows are chilled rapidly against glaciers. Affected glaciers will not melt instantly, but when they eventually retreat in response to long-term climate patterns, the ‘frozen’ position of the lava preserves the position where the ice used to be. This leads to two important questions: (1) how are volcanoes formed over time by eruptions that occurred in the presence of ice; and (2) can the position of past glaciers be reconstructed by mapping out the locations of lava flows that chilled against ice?

I set out to test these hypotheses during my PhD research, which was co-supervised by Victoria University of Wellington and GNS Science, and co-funded by Victoria University and the Department of Conservation. Our initial theory proposed that if large glaciers were present on Ruapehu when it erupted in the past, the distribution of lava flows must have been affected by the position of the ice. Because glaciers fill valleys, lava flows that travelled down the flanks of a volcano during an eruption should have been deflected toward the ice-free ridges next to the glacier3. I spent each summer for three years exploring every ridge and valley on Ruapehu in my search for evidence that this process of lava-ice interaction had occurred. 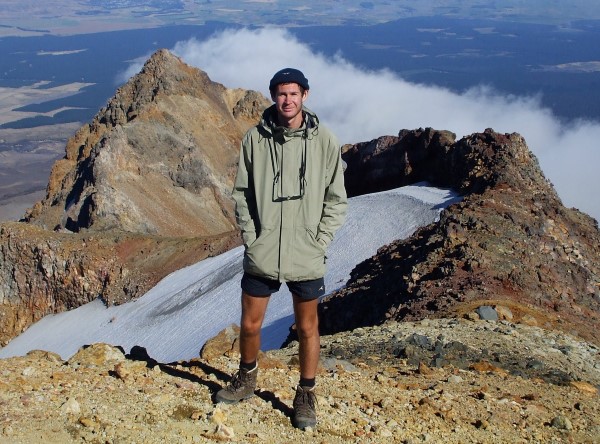 Dr Chris Conway on the summit of Mount Ruapehu

The evidence was overwhelming. My colleagues and I discovered thick lava flows (up to 80 m-high) with glassy, fractured surfaces on numerous ridges located next to deep valleys. We interpreted that these features had formed because hot lava that travelled down the flanks of the volcano had been excluded from the adjacent valleys, which were filled with glaciers at the time. As a result, the lava was forced to fill the space between ridge and glacier, thus producing the extremely thick outcrops4. The quick cooling against ice produced the glassy texture of these lava flows, and caused them to contract and crack open along closely spaced fractures. The resulting pattern of intersecting fractures formed hexagonal columns on the sides of the cooled lava flows. These fine-scale columns are characteristic of the process of lava-ice interaction on volcanoes, and were used to identify many lava flows on Ruapehu that had cooled against glaciers. 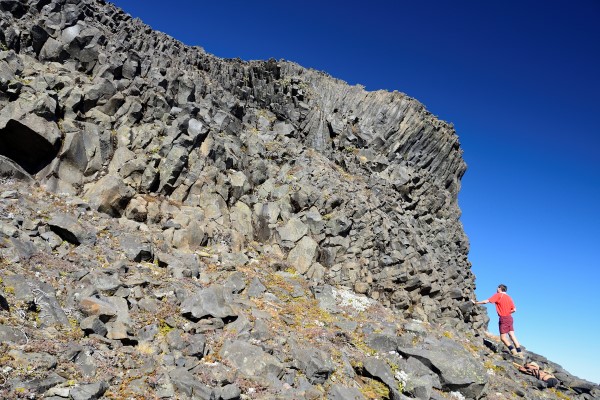 An ice-chilled lava flow on Mount Ruapehu. The fine-scale columns indicate that the lava cooled rapidly against the side of a glacier. Photo by Dougal Townsend, GNS Science.

By measuring the ages and positions of these lava flows that were ‘frozen’ next to ice, we compiled a record of the presence and extent of former glaciers on Ruapehu. Our results showed that large glaciers covered the summit of the volcano and filled valleys between 50,000 and 15,000 years ago5. The information we acquired from lava flows contributed to a separate study by glaciologist Dr Shaun Eaves, who showed that temperatures must have been colder by 5–6 °C for these glaciers to form during that time6. On the other hand, we noted that thin lava flows located within valleys were all younger than 15,000 years old. This relationship indicates that the glaciers had melted by this time as the climate became warmer, which allowed lava to flow into the ice-free valleys.

The story of the volcanic evolution of Mount Ruapehu is one of fire and ice. Unlike previous accounts, however, the new version shows that these two elements are closely linked because eruptions and glaciations occurred at the same time. Incorporating the evidence for lava-ice interaction into the story has had a major impact on how we understand the history of this iconic volcano and, therefore, how we prepare for future eruptions. The sequel is now being written for Mount Tongariro, as the next batch of curious geologists get their turn to climb over remote and unexplored parts of an active volcano. As for me, I have moved to Japan to continue my research at the National Museum of Nature and Science in Tokyo. I received a postdoctoral fellowship from the Japan Society for the Promotion of Science, which I applied for through the Royal Society of New Zealand. As I slowly but surely make my way around the 111 active volcanoes here, I have one piece of advice for budding volcanologists back home: hike the Round the Mountain track on Ruapehu in the summer and search for the clues of the volcano’s icy history for yourself.