Antarctica has long drawn explorers and scientists to investigate the icy continent, from the heroic feats of the first expeditions by James Ross, Roald Amundsen, Robert Falcon Scott and Ernest Shackleton to the far more comfortable efforts by scientists of today. Mount Erebus, which holds a unique place culturally in New Zealand, and the companion volcano Mount Terror (dormant) were named after the exploring ships of Sir James Ross, who discovered them and the Transantarctic Mountains in 1841. Erebus was first ascended by Sir Ernest Shackleton and party in 1908, and today is regarded as a key piece in the puzzle for understanding global volcanism and the ascent of magma from the deep mantle.

Mount Erebus is an example of a CO2-rich rift volcano and, as such, is one of the world’s few volcanos to have a lasting lava lake at its summit crater. Continental rifting happens as Earth’s crust and mantle are pulled apart either by distant plate boundary forces or by upwelling plumes from great depth. Rift volcanoes stand in stark contrast to the more common arc volcanoes, which occur at subduction margins where one tectonic plate descends beneath another, like those around the Pacific Ring of Fire. Arc volcanoes are typically water-rich due to contributions from the subducting oceanic crust and overlying sediments, and this water prevents their magmas from reaching the surface. As arc magmas ascend and the overlying pressure is reduced, the water becomes supersaturated and flashes out, sometimes explosively as occurred at Mount St Helens in 1980. The remaining “dehydrated” magma stalls in place, typically around 5 km below the earth’s surface. 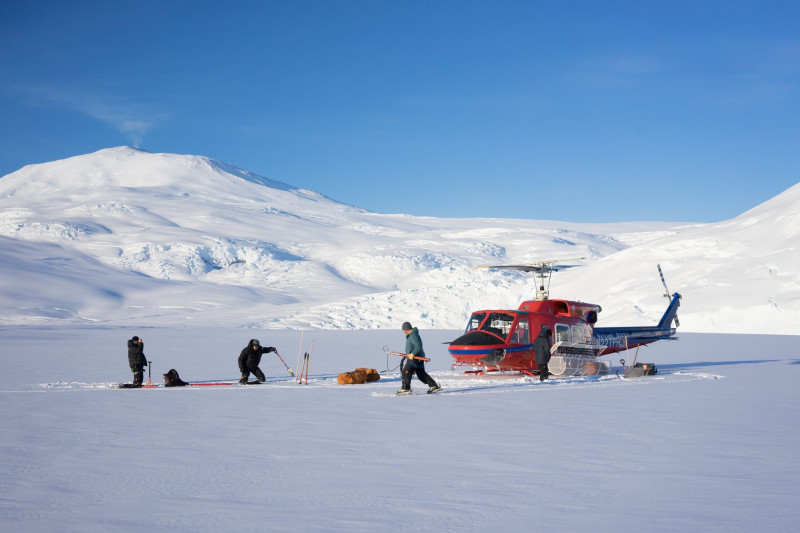 To better understand the relatively peaceful ascent of rift magmas all the way to the surface, in this Marsden-funded project Dr Graham Hill (University of Canterbury, Czech Academy of Science), Professor Phil Wannamaker (University of Utah) and colleagues used a method called magnetotelluric (MT) sounding to image the Earth’s structure approximately 100 km beneath Mount Erebus. MT sounding uses natural electromagnetic waves generated by the sun and lightning. Most such waves travel through the air, but a portion penetrate the Earth, scatter off rock structures and return to the surface where they can be measured by sophisticated volt meters. As the electromagnetic waves pass through Earth’s interior, they travel faster or slower depending on the extent to which rock and other material conducts or resists electricity. Magma is conductive, so it can be detected by this technique. 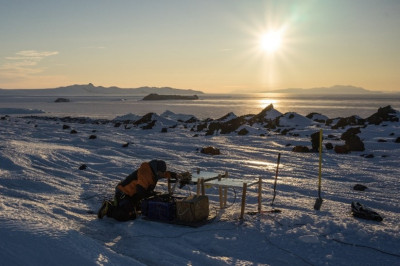 Graham Hill checking an MT site near Cape Evans on Ross Island with the Transantarctic Mountains in the background. Photo credit, Danny Uhlmann.

Over three Antarctic summer field campaigns (2014-2017), 129 MT sites were measured around Erebus’ Ross Island. Each site required a ground footprint of ~150 × 150 m and necessitated a multi-faceted, international field team of scientists and mountaineers led by IFMGA guide Danny Uhlmann. Electromagnetic observations from all the stations were modelled to generate an image of the magmatic pathway beneath the island and its volcanoes. 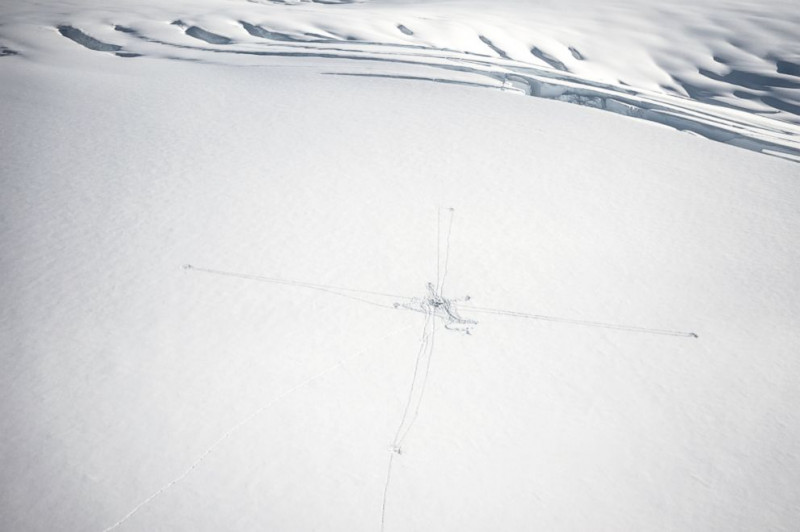 Aerial photo of a magnetotelluric sounding system on the edge of a crevasse field illustrating the 150 × 150 m footprint. Photo credit, Danny Uhlmann.

Recently published results in Nature Communications (https://doi.org/10.1038/s41467-022-30627-7) show a steep magma conduit that originates in the upper mantle and extends continuously through shallow crustal depths right up to the crater lake. The conduit undergoes a pronounced turn in the deep crust (at ~10 km depth), which is interpreted as a structural fault ‘valve’ that controls the episodic ascent of magma and CO2 to higher levels. 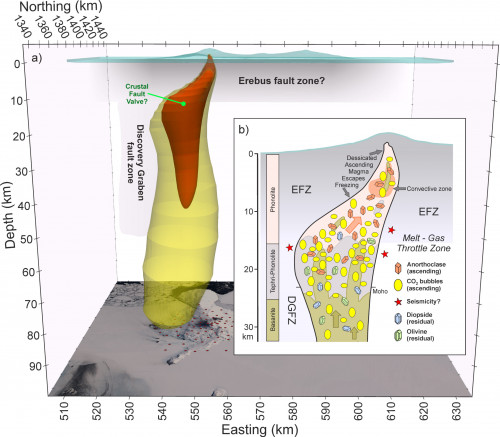 A: 3D visualization from the magnetotelluric scan of Erebus’ interior showing the magmatic conduit and its inferred crustal fault valve at the prominent lateral turn (red is the most conductive and magma rich). B: Depiction of magmatic processes conjectured to be occurring in the upper magmatic core zone with rising bubbles of CO2 and characteristic mineralogy at each depth. Illustration from the paper.

These results not only image the magmatic pathway for this type of volcano but helps us better understand the scale, volume and controls on CO2-rich gas transport from the mantle. This work adds another piece to the puzzle of global volcanism and betters our understanding of the links between the deep earth and our atmosphere.

Additional information: Learn more about this feildwork from our 2017 update

Additional information: Go to the article in Nature Communications

University of Canterbury and the Czech Academy of Science