Could life have originated on land?

Professor Kathy Campbell from the University of Auckland will drill into the world’s oldest land-based hot springs in outback Western Australia for new evidence on some of the earliest life on Earth, and clues to help find remains of past life on Mars 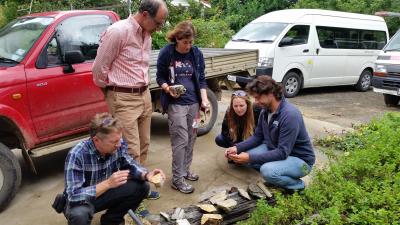 Determining the origins of life is one of the great scientific challenges of our time. Recognising traces of early life in rocks after billions of years of alteration by natural processes remains difficult. It is therefore not surprising that the time when life began remains unknown. Nevertheless, we do know where life began – or do we? Following the discovery in deep-sea hydrothermal vents of ’extremophiles’ – heat loving microbes that constitute Earth’s most primitive living things – spawned the popular notion that life originated in the ocean. However, a new discovery in Western Australia challenges this view.

Researchers recently found a 3.5 billion year-old rock formation in Pilbara, Australia, originally thought to be an ancient marine basin.  It contains well-preserved mineral, chemical, and textural indicators of ancient life – the earliest convincing evidence to date. However, newly discovered geothermal sediments indicates the formation preserves a remnant of Earth’s oldest known land-based hot spring. If proven, this discovery will extend the known geological record of inhabited terrestrial hot springs on Earth by around 3 billion years, and push back the existence of life on land by 580 million years – to a time comparable with some of the earliest known ocean fossils.

Professor Kathy Campbell from The University of Auckland, along with her multinational research team, has been awarded a Marsden Fund grant to examine the Pilbara rock. They will drill down into the ancient hot spring deposit to obtain a core of unweathered rock to sample for geochemical, mineral, and organic analysis to help solve the riddle of how life took hold on Earth.

In a novel approach, they will compare the well preserved drill core with modern-day hot spring deposits, studied previously by the team. This will provide a better understanding of microbial-mineral-fluid relationships, and reveal the ancient environmental and geochemical conditions under which earliest life on land developed.

In addition, results from this project will inform the upcoming NASA Mars 2020 mission as to the best location on Mars to explore for possible signs of extraterrestrial life, in a hot spring setting that also formed over 3 billion years ago; a time on the Red Planet when volcanism was active and water flowed across its surface. Some members of the Marsden team, including Professor Campbell, are helping to present the science case for the rover site selection process currently underway in the USA.