How fast are you ageing?

Working with blood samples from volunteers, Professor Mark Hampton from the University of Otago will study human ageing.

Ageing is a major risk factor for many human diseases, but there is limited information on the underlying biochemical and molecular processes involved. A common feature of metabolism is the everyday transfer of electrons to oxygen, generating reactive oxygen species that damage our cells. Oxidative damage accumulates in aged tissues, but it is unclear if this damage is a cause or a consequence of ageing. While studying blood samples from healthy middle-aged people, Professor Hampton and his team observed an association between the rate at which the red blood cells from these people recovered from an oxidative challenge and how fast the donors were ageing. Professor Hampton has been awarded a Marsden Fund Standard grant to undertake a detailed investigation of the link between human ageing and the ability of our cells to respond to oxidative stress. 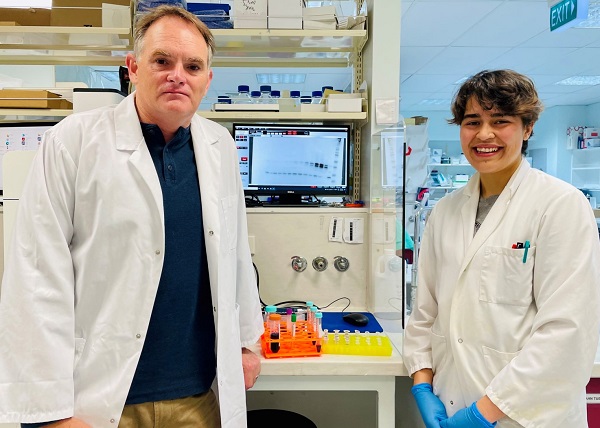 Professor Hampton and PhD student Te-Rina King Hudson who will work on this project. Image: supplied

Professor Hampton and his team will work with blood donors of different ages to understand the genetic and environmental factors that influence how quickly proteins called peroxiredoxins inside red blood cells return to their normal state after exposure to oxidative stress. Peroxiredoxins are found in many organisms – including humans – and are thought to be central to the response of cells to oxidative stress. Red blood cells may be valuable predictors of how fast other cells in the body are ageing, and provide a window into what is happening at a molecular level. This study is one of the few that is taking a close look at fundamental processes associated with human ageing prior to the emergence of age-related disease.