On Earth, fluid dynamics is the study of liquids and gasses. In space, dust can also act like a fluid. The study of fluid dynamics can apply to many astrophysical processes, including the formation of planets around stars. Young stars are formed with large rotating discs of dust and gas around them. Solid particles within this disc eventually merge to form planets. Yet, we do not yet fully understand the physical processes that lead to planet formation from a protoplanetary disc.

Amelia Cordwell has been awarded a Cambridge Rutherford Memorial PhD Scholarship to study these disc-planet interactions. Amelia will explore two main areas of interest during her PhD. Firstly, after initial formation, gravitational interactions with the disc cause massive planets to migrate to different orbits. Current theories predict a migration towards the star on a time scale much faster than the lifetime of the protoplanetary disc. This presents problems for planetary formation theories, which need to be resolved. Secondly, complex substructure has been observed within many protoplanetary discs. Young planets represent the best candidates for explaining the multiple gaps and rings of dust that have been observed. This illustrates the diverse manifestations of the disc-planet interaction, which are not yet fully understood. Amelia’s PhD studies will begin to connect the details of the physical processes within protoplanetary discs that lead to planet formation. This research will be at the leading edge of planetary science. 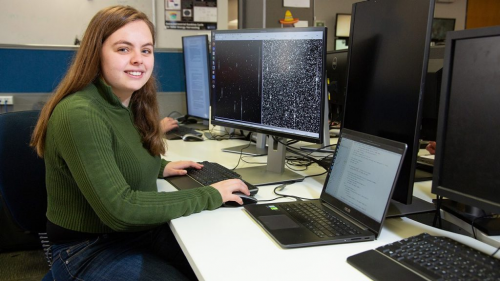 Amelia Cordwell in the lab (supplied)