Brook grew up in Whanganui and spent much of his childhood outdoors. As an adult, he was naturally drawn to Earth Sciences and its opportunities for fieldwork. Over the course of his career, Brook has been fortunate to have conducted fieldwork in many different countries including New Zealand, Brazil, the United Arab Emirates, the United Kingdom, Mexico and the United States as well as at sea. A personal highlight has been when locals in the various communities he has visited are curious enough to strike up a conversation. Their questions and reactions put the scope of his research in perspective, especially when they are genuinely fascinated by what he is doing.

Having spent the past seven years overseas, the Rutherford Postdoctoral Fellowship will bring Brook home to New Zealand, and allow him to link up with colleagues at GNS working at the cutting edge of subduction zone research. As part of his project, Brook will forge new links with Japanese and US scientists while working on some of the best crustal-scale seismic data ever recorded across two subduction megathrust faults.

Brook is most excited to conduct new 3D high-resolution imaging during his project. He believes this approach will produce the most detailed pictures to date of the areas he is investigating – the NE Japan and Southern Hikurangi megathrust faults – allowing him to reveal far more about these faults than was previously possible. 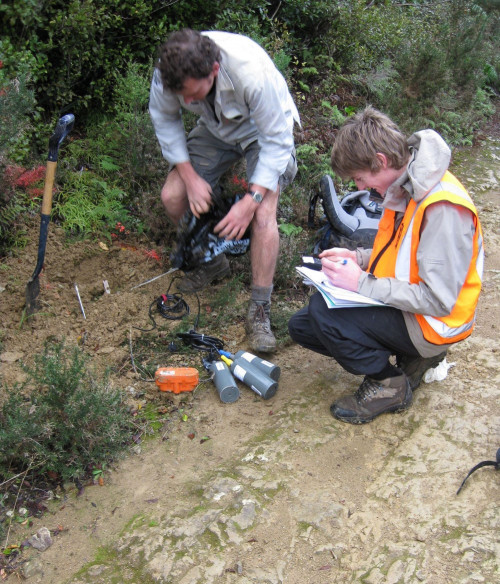 Drs Brook Tozer and Ben Hines deploying a seismic station in the Remutaka Ranges as part of the Seismic Array Hikirangi Experiment in 2011. Photo: supplied.

Megathrust faults produce the largest earthquakes on Earth. Ground motion associated with these events can also produce tsunamis, making them one of the most devastating of natural hazards. These faults form where two tectonic plates converge and one plate dives down (subducts) beneath the other. One such megathrust fault occurs along the east coast of the North Island, the Hikurangi megathrust, where the Pacific plate is subducting beneath the Australian plate. Understanding the potential magnitude of earthquakes along the Hikurangi megathrust is critical for earthquake risk assessment in Aotearoa.

Earthquake magnitude is primarily controlled by the area of the fault that ruptures and how much movement (slip) occurs during an event. Estimates of these parameters for future Hikurangi megathrust earthquakes are currently poorly constrained owing to a lack of events in historical times. However, a natural analogue to Hikurangi is the NE Japan megathrust, where the 2011 magnitude 9 Tohoku earthquake occurred. This well-recorded event provided invaluable data for understanding the underlying processes that lead to such a large earthquake. In Aotearoa, ongoing research by GNS scientists has revealed that the Te Moana-o-Raukawa Cook Strait region bears many similarities to that of Tohoku. Dr Brook Tozer will be investigating how closely this scenario resembles that of Tohoku with the aim of understanding the potential extent and slip of a future Hikurangi megathrust earthquake.

Addressing this question requires a detailed comparison of the rock types, their physical properties and 3D distribution in order to examine and compare their slip behaviour. By analysing seismic waves that have travelled through the crust, Dr. Brook Tozer will generate high-resolution 3D models of the subsurface structure of each region in a manner analogous to medical CAT scanning. Outcomes from this project will include improving our ability to assess the hazard posed here in Aotearoa, as well as our understanding of megathrusts globally.