2018: Mr Rakesh Arul, University of Auckland, has been awarded a Cambridge Rutherford Memorial PhD Scholarships for research entitled: “Bonds with light - Can quantum optics be used to control chemistry?” 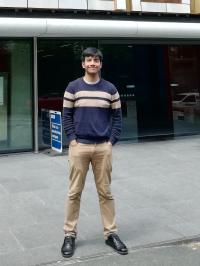 Catalysts (a substance that change the speed of the chemical processes without being consumed) are everywhere, from your mouth to the toxic bowels of an industrial chemical plant. Enzymes in our body catalyse the biochemical reactions that keep us alive, while at another extreme, expensive metals or metal complexes catalyse specific reactions in chemical engineering, keeping energy usage and costs down. Scientists are continuously trying to design new materials to be used as catalysts in order to speed up specific reactions.

Mr Rakesh Arul from University of Auckland has received a Cambridge Rutherford Memorial Scholarship to pursue a PhD at the University of Cambridge to investigate this age-old problem through a completely new mechanism.  He will make use of so-called “cavity polaritons”, a quantum mixture of light and matter which was first proposed in 1958.  Cavity polaritons are created by placing a molecule between two mirrors and bouncing light back and forth. By changing the distance between the cavity’s mirrors, the enhanced light wave inside can be matched to resonate strongly with a specific chemical bond, like pushing a swing in-phase.

In 2016, Thomas Ebbessen’s research group in Strasbourg found that placing molecules within a cavity to create a polariton can slow down a chemical reaction. Mr Rakesh’s MSc project utilised this concept in reverse, to speed up reactions. Now Mr Rakesh’s plan is to expand this breakthrough into a PhD project, with world-renowned nanophotonics scientist, Professor Baumberg, the leader of the NanoPhotonics Centre at the Cavendish Laboratory at the University of Cambridge. He will investigate fundamental questions about the nature of the chemical bond within these polaritons, generalising the catalysis to new classes of reactions and attempt to directly observe the normally short-lived intermediate stages of reaction.

New knowledge generated through this project has the potential to transform a field where it is normal to spend years optimising a single catalytic reaction. It may be used as an unconventional tool to control the selectivity and speed of reactions, and broaden the traditional definition of catalysis.