Home What we do Our medals and awards Metge Medal 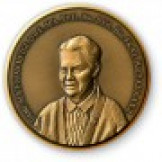 The Dame Joan Metge Medal will be awarded to a social scientist who, working in New Zealand, has shown excellence in his/her area but also excellence in the utilisation of his/her social science training, research experience, teaching and/or working life to facilitate and create connections and opportunities among the various stakeholders involved in social science research.

Since 2017 the medal has been referred to as the Metge Medal.

The Medal will recognise in particular those who have contributed to capacity building, beneficial relationships with research participants, mentoring of new researchers as well as contributions to new knowledge.

The Metge Medal will be awarded biennially, alternatively with the Te Rangi Hiroa Medal. The inaugural medal was awarded in 2008.

Nominations will open in 2022.

To make a nomination, please contact academy@royalsociety.org.nz and a URL will be sent to you to access the nomination web portal.

Our medals and awards