Many New Zealanders live either on coasts or on floodplains, exposing us to coastal inundation and flood events.

Shoreline ecology, public infrastructure, residential and commercial assets, community values and the future use of coastal-marine resources will be severely affected by changes to coasts due to sea level rise, and storm surge, and secondary effects such as erosion and flooding. 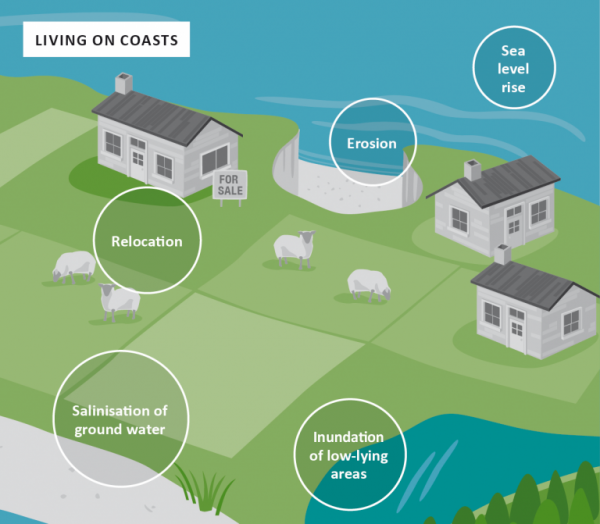 It is very likely that the rate of sea level rise around New Zealand will exceed the historical rate and exceed the global average. At least another 30cm is virtually guaranteed this century but the rise could exceed 1m. With a 30cm rise in sea level, the current ‘1 in 100 year’ extreme sea level event would be expected to occur once every year or so in many coastal regions. Along the Otago coast, for example, the difference between 2-year and 100-year storm surges is about 32cm.

Rising sea levels mean rising coastal water tables, leading to semi-permanent or permanent inundation (flooding) of low-lying areas, and the potential for salt water to get into freshwater systems.

The implications for coastal populations will vary widely, depending on the shape of the coast, the distribution of buildings and structures at risk and their vulnerability, and the differentiated make-up of communities themselves. However, the recent report of the Parliamentary Commissioner for the Environment indicates that thousands of households in many towns and cities will be affected.

These communities will need to plan for and adapt to change and some will need to decide whether to ‘hold the line’ or relocate in response to known risks or actual climate change impacts. Without clear legislative guidance, litigation is likely to increase.