Changes in ocean temperature, water chemistry and currents due to climate change will have impacts on New Zealand’s marine life, fishing, aquaculture and recreation use. 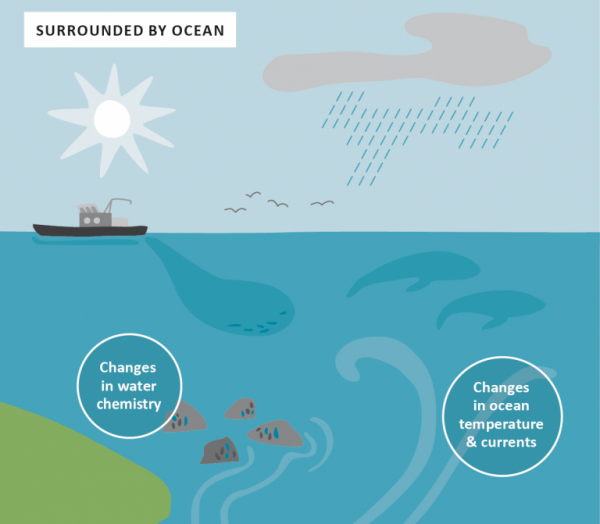 Model projections show that the waters around New Zealand will warm and acidify, with the greatest warming occurring in the Tasman Sea. Studies on different marine organisms have shown that there will be impacts ranging from productivity to ecosystem community structure as a result of these changes.

The waters around New Zealand are warming as the overlying atmosphere warms, and changes in thermal stratification in the near-surface ocean are expected to lead to decreases in nutrients such as nitrate and phosphate in the surface ocean, where most marine organisms live.

Changes in ocean chemistry may also impact on many marine species. Changes in chemistry and temperature are expected to have a particularly strong effect on calcifiers, organisms that form carbonate shells (e.g. mussels, pāua, corals), and trends in temperature and nutrient patterns may lead to southward migration of many fish that normally live at lower latitudes into the waters around New Zealand.

A fifteen-year time series taken off the Dunedin coast shows that ocean chemistry is already changing in the waters around New Zealand, consistent with measurements from other sites around the world.

Experimental work on the impacts of acidification in New Zealand waters on juvenile pāua has shown that pāua grow more slowly under acidic conditions and their shells show clear signs of being dissolved. Similar effects were found for growth and shell surfaces of flat oysters. This is consistent with observed negative effects of ocean acidification on the function and metabolism of Antarctic bivalves.