Over half of New Zealand’s more then 50,000 species are found nowhere else in the world; over three quarters of the vascular plants, rising to 93% for alpine plants, and over 80% for the more than 20,000 invertebrates.

Existing environmental stresses will interact with, and in many cases be exacerbated by, shifts in mean climatic conditions and associated change in the frequency or intensity of extreme events, especially fire, drought, and floods. 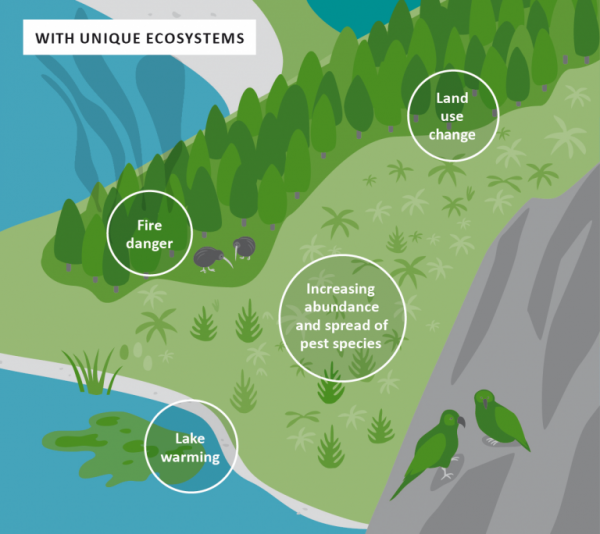 Existing environmental stresses will be exacerbated by shifts in mean climatic conditions and associated change in the frequency or intensity of extreme events, especially fire, drought, and floods.

Native ecosystems are being directly affected by climate change and also indirectly by expanded ranges for pests and diseases, increased fire risk, and land use change.

Even with the current rise in average temperatures (about 1°C above pre-industrial), up to 70 species of native plants are likely to be at risk of extinction this century.

Warming of New Zealand’s normally cold lakes, combined with nutrient runoff from the surrounding production landscape (e.g. agricultural, forestry, dairy land), will likely increase occurrence of cyanobacterial blooms, while the abundance and spread of pest species (e.g. wilding pines) will be an added cost for Councils and may affect New Zealand’s ‘clean and green’ image.