Fossil bones collected in the early 1990s on Henderson Island, part of the Pitcairn Group, have revealed a new species of Polynesian sandpiper

The Henderson Sandpiper, a small wading bird that has been extinct for centuries, is described in an article in the Zoological Journal of the Linnean Society published last week.

Canterbury Museum Visiting Researcher Dr Graham Wragg collected the bones from caves and overhangs on Henderson Island in 1991 and 1992 during the Sir Peter Scott Commemorative Expedition to the Pitcairn Islands.

Prosobonia sauli is the fifth known species of Polynesian sandpiper. All but one of the species, the endangered Tuamotu Sandpiper (Prosobonia parvirostris), are extinct.

“It’s possible these humans brought with them the Polynesian rat, which Polynesian sandpiper populations are very vulnerable to.”

DNA of the living Tuamotu Sandpiper and the extinct Tahiti Sandpiper (Prosobonia leucoptera), which is known only from a skin in the Naturalis Biodiversity Center in the Netherlands, was used to determine how Polynesian sandpipers are related to other wading birds. 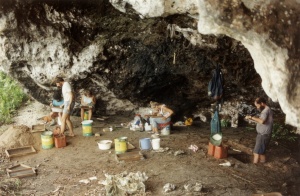 “We found that Polynesian sandpipers are early-diverging members of a group that includes calidrine sandpipers and turnstones. They are unlike other sandpipers in that they are restricted to islands of the Pacific and do not migrate,” says Dr De Pietri.

Comparisons with the other two extinct Polynesian sandpiper species, the Kiritimati Sandpiper (Prosobonia cancellata) and the Mo’orea Sandpiper (Prosobonia ellisi), are complicated. These birds are known only from illustrations primarily by William Wade Ellis, an artist and Surgeon’s Mate on Captain James Cook’s third expedition, who probably saw the birds alive in the 1770s.

Compared to the Tuamotu Sandpiper, its geographically closest cousin, the Henderson Sandpiper had longer legs and a wider, straighter bill, indicating how it foraged for food. It probably adapted to the habitats available on Henderson Island, which are different to those on other islands where Polynesian sandpipers were found.

Henderson Island is the largest island in the Pitcairn Group, in the middle of the South Pacific Ocean. It has been uninhabited since around the fifteenth century and was designated a World Heritage Site by the United Nations in 1988.

Dr Paul Scofield, Canterbury Museum Senior Curator Natural History and one of the study’s co-authors, says Henderson Island is home to a number of unique species, a handful of which are landbirds like the Henderson Sandpiper.

“The island is really quite remarkable because every landbird species that lives there, or that we know used to live there, is not found anywhere else,” he says.

Dr De Pietri says the study shows the need to protect the one remaining Polynesian sandpiper species, the Tuamotu Sandpiper.

“We know that just a few centuries ago there were at least five Polynesian sandpiper species scattered around the Pacific. Now there’s only one, and its numbers are declining, so we need to ensure we look after the remaining populations.”

This research was supported by a grant from the Marsden Fund Council, managed by the Royal Society Te Apārangi, as well as the R S Allan Fund managed by Canterbury Museum.

CTM1601: 'Early birds: insights from the fossil record into the evolutionary and ecological histories of shorebirds'