University of Otago researchers are behind a major scientific breakthrough which could lead to elimination of the world’s biggest infectious diseases killer, tuberculosis (TB) 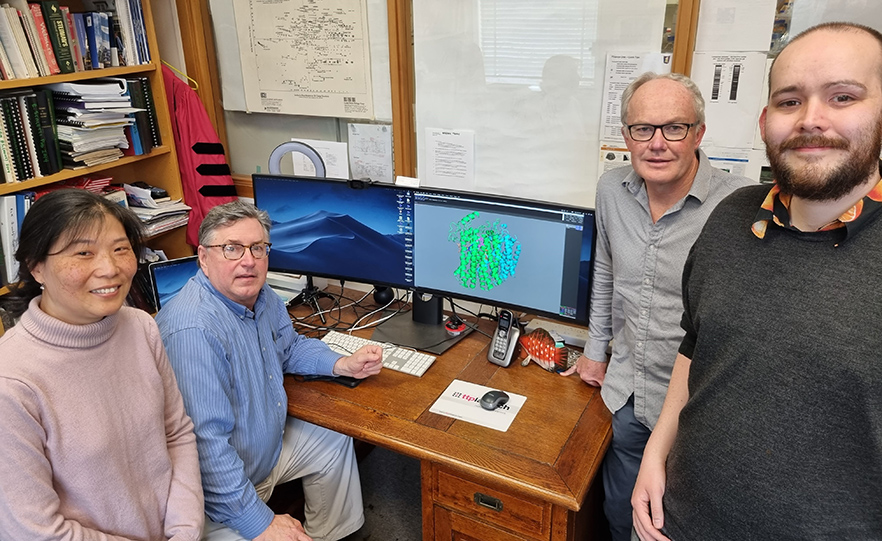 Professor Kurt Krause and Professor Greg Cook are part of an international collaboration with Nobel Prize winner Professor Hartmut Michel, of Germany’s Max Planck Institute of Biophysics, that has determined the atomic structure of a protein called bd oxidase.

That discovery will serve as an important template for drug discovery and for producing fast acting drugs – ideally a four-week course, instead of the current side effect-heavy, six-month protocol, Professor Krause says.

“TB is the world's leading cause of death from infectious diseases and a rapid cure could lead to world-wide elimination of TB. This would have an enormous global health impact.

“The holy grail in infectious diseases would be a rapid cure for TB – and the determination of the bd oxidase structure from the bacterium that causes TB is a key first step in exactly that direction.”

The bd oxidase protein lives in the cell membrane of the TB bacterium and helps it breathe under very low oxygen conditions that often occur in infected lungs during a TB infection.

“Knowing the structure of this protein will speed up the process of designing and discovering small molecules that can block bd oxidase function and help to rapidly kill TB germs,” Professor Krause says.

“Our detailed insights into the long-sought atomic framework of the cytochrome bd oxidase from Mycobacterium tuberculosis will form the basis for the design of highly specific drugs to act on this enzyme.”

TB is one of the hardest infections to treat. It is very hardy, resilient, hard to kill and hard to study in the lab because it grows extremely slowly.

Professor Cook says ten million people develop TB every year and it kills about 5000 people a day. It has infected two billion people and had killed one billion before anti-TB drugs were discovered.

“TB is hard to cure now because at best it requires normally four drugs taken for about six months and the side effects are extreme. In fact, people often cannot adhere to the regime because of the side effects and the length of the time the drugs must be taken.

“It requires more drugs over an even longer period if the TB bacteria causing the infection are resistant to common TB antibiotics, which happens on average in about 5 to 10 per cent of cases,” Professor Cook says.

A Marsden grant and Royal Society of New Zealand Catalyst Funding have enabled Professors Krause and Cook to focus on this project for about six years, but scientists worldwide have been working on making this discovery for more than two decades.

The research, published in the journal Nature Communications, is a true trans-disciplinary effort; Professor Cook’s team focussed on the microbiology of TB, testing possible inhibitors, designing genetic strains of Mycobacterium tuberculosis to work with and understanding the respiratory chain as a potential target for drug design. Professor Krause’s team focused on the growth of bacteria to produce bd oxidase and the purification of bd oxidase, while Professor Michel and Dr Schara Safarian performed high resolution cryo electron microscopy measurements on the proteins supplied by Otago and determined the three-dimensional structure of bd oxidase.

Professor Krause says the plan now is to start building on the bd oxidase structure to understand its mechanism, identify tight inhibitors and refine these inhibitors into a multi-drug cocktail to rapidly cure TB.

“It is going to take a long time to reach this goal, but having the structure now in hand gives us exactly the encouragement we need to keep pushing forward toward our goal of rapid treatment for TB.”