Battle of the body snatchers: do multiple parasites in a host help or hinder each other?

Dr Edwina Dowle, University of Otago, will study how parasites manipulate their hosts to enhance their own survival and transmission

Body snatching for survival; it sounds like science fiction, but it is a common occurrence in the natural world. Parasites routinely manipulate their hosts, imposing changes like altering the host’s appearance and behaviour. Cave wētā, who are frequently infected by hairworm parasites, provide a notable instance of this phenomenon. When mature, the hairworms manipulate the cave wētā to induce fatal water-seeking behaviour. The hairworm can then emerge from the drowned remains of the host wētā and reproduce. 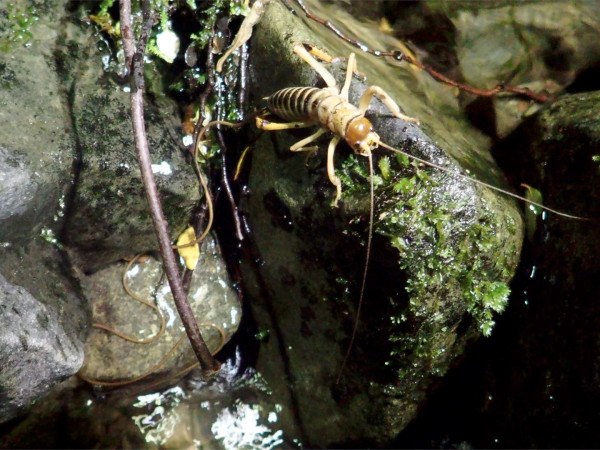 A complication (for the hairworms at least) arises when, as is often the case, the wētā is infected by more than one hairworm. If any of these co-occurring hairworms have not yet developed enough to emerge, then they will die alongside the wētā when the mature hairworm successfully manipulates the wētā to seek water and drown itself. If these immature wētā are to survive, they may work to sabotage and delay the host manipulations induced by mature hairworms. Alternatively, closely related hairworms found in the same host could sacrifice their own survival for that of a close relative.

Dr Edwina Dowle from the Department of Anatomy, University of Otago aims to understand this dimension of host-parasite interaction through her Te Pūtea Rangahau a Marsden Fast-Start grant. Dr Dowle will use a combination of behavioural science and molecular genetics to understand the the mechanisms that co-occurring parasites use to help or hinder each other’s host manipulation using the cave wētā as a model.

This mahi work will enhance our knowledge of the molecular toolbox and pathways underpinning co-occuring parasite interactions, an area for which no genetic data are currently available.