Global climate systems are extremely complex. They consist of interacting sub-systems, such as the oceans, atmosphere, land and ice, in which the behaviour of each subsystem is both influenced by and, after a delay, itself drives, global climate. These interactions are examples of delayed feedback loops and are governed by complicated mathematics, which is not yet well understood. An important example is the famous El-Niño climate cycle operating in the Pacific Ocean, which has global impact on weather patterns and events but which is ultimately influenced by the overall global climate itself. 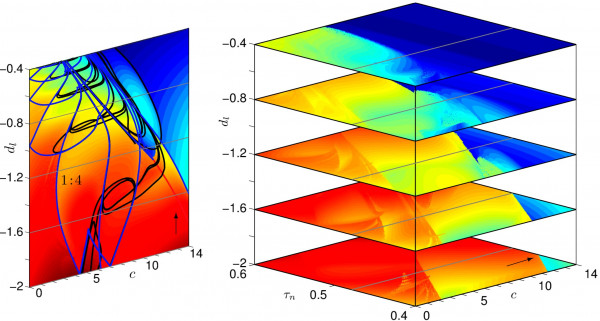 Representation of how delayed feedback loops influence observable behaviour in a model for the El Niño phenomenon; from joint work of Professor Krauskopf with Dr Andrew Keane and Associate Professor Claire Postlethwaite, published in the SIAM Journal on Applied Dynamical Systems

This work will be of immediate benefit to the Oceania region where varying delays arise from the interaction between Te Moana-nui-a-Kiwa the Pacific Ocean and the atmosphere. One crucial product of the research will be improved models of the mechanisms that underpin and control the climate, thereby leading to enhanced and more accurate predictions of future climatic events.