Professor Shane Telfer from Massey University will develop a revolutionary new tool for ‘asymmetric catalysis’ to make single versions of mirror-image molecules. This fundamental research will produce a new platform for chemical reactions with unprecedented capabilities

Certain chemicals can exist in left-handed and right-handed forms, where each is the mirror image of the other. This includes biomolecules such as DNA, proteins, and sugars. Making new molecules within a specific mirror-image form is important for pharmaceuticals and polymers and is intrinsic to the fundamentals of modern chemical sciences. For example, one mirror image of carvone smells like spearmint whereas the other smells like caraway. In aspartame, one form is sweet while the other is tasteless. 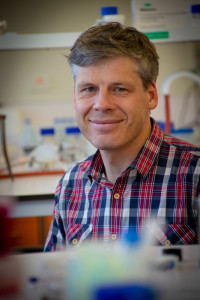 Professor Shane Telfer from Massey University has received a Te Pūtea Rangahau a Marsden grant to develop a novel approach to ‘asymmetric catalysis’ with the goal of specifically producing only the desirable single-handed form of molecules, and not their mirror images. His revolutionary new design strategy will bring precursor chemicals together by anchoring them inside the pore of a metal-organic framework, like a crystalline sponge. This will enable a chemical reaction inside the metal-organic framework to produce only the desired single-handed product in a way that is distinct from traditional catalysts. Professor Telfer’s research will be supported by computational methods to help focus experimental work and maximise efficiency.

This reimaging of ‘asymmetric catalysis’ will side step the compromises inherent to traditional methods in chemistry, and deliver fundamental new knowledge and a new platform for chemical reactions with unprecedented capabilities.