Alzheimer’s disease is the most common form of dementia and a leading cause of death worldwide. It affects nearly 1.3% of the population in Aotearoa. Due to our ageing population, the rates of Alzheimer’s disease are increasing. While current treatments can help to manage symptoms, they are unable to slow the progression of this devastating disease, which gradually leads to loss of most brain functions and ultimately the death of the patient. 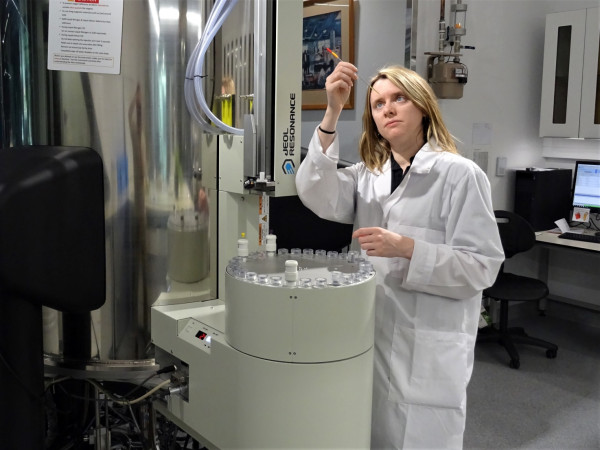 Nuclear magnetic resonance (NMR) spectroscopy is a powerful method for studying proteins and their interactions in molecular detail. Here Dr. Morris loads a protein sample into an NMR instrument to investigate it's structure. She will use this technology to elucidate details of the interactions of proteins linked to Alzheimer's progression.

With her Te Pūtea Rangahau a Marsden Fast-Start grant, Dr Morris will use molecular and biophysical techniques to determine how ‘amyloid-beta’ protein aggregates interact with TREM2.  She will then determine how disease-linked mutations affect this interaction, and the molecular basis by which they confer increased Alzheimer’s disease risk. This work will establish crucial information on the molecular pathology of Alzheimer’s disease, seek urgently needed insights into the mechanisms of disease progression, and pave the way for the development of therapies to modulate these key protein interactions in Alzheimer’s disease.