Home What we do Our medals and awards Medals and Awards News 2017 Pickering Medal: Painting cells and surfaces with bio-paints

2017 Pickering Medal: Painting cells and surfaces with bio-paints for widespread beneficial use

Professor Stephen Henry has been awarded the Pickering Medal by the Royal Society Te Apārangi for his development and commercialisation of a surface-modification technology, called Kode™ Technology, which shows huge promise for therapeutic use including fighting cancer, reducing surgical implant infections and healing wounds.

Professor Stephen Henry has been awarded the Pickering Medal by the Royal Society Te Apārangi for his development and commercialisation of a surface-modification technology, called Kode™ Technology, which shows huge promise for therapeutic use including fighting cancer, reducing surgical implant infections and healing wounds.

The technology provides a simple way to bio-modify surfaces, which can include any type of cell or any type of surface.

The technology is a ‘bio-paint’ which consists of three parts: a lipid end that can anchor into a cell membrane or cause it to stick to surfaces, a functional head that is bioactive, and a spacer in between that makes the whole thing work. This structure can be likened to a Lego® Minifigure with the legs anchoring it to the surface, and lot of different changeable body shapes in the middle that are able to present the head to the environment to produce the desired effect.

As surfaces are essential in all natural biological interactions, Kode™ Technology provides a simple yet elegant way to modify those surfaces and change their characteristics for specialised applications. This can be achieved quickly, reliably and without causing harm to sensitive surfaces such as cell membranes.

The research community has begun using this technology as a way of easily modifying cells, viruses, bacteria, organisms, solutions, aerosols, and surfaces, but the technology also has numerous commercial applications, including diagnostics and therapeutic use.

Multiple products are in development including surgical anti-microbial implant coatings and active surgical dressings, which could improve wound care.

One highly promising example is a treatment for cancer. Kode™ Technology has been licensed as the cancer immunotherapy agent called AGI-134. The licensee has completed pre-clinical studies and Phase I/II clinical trials are set to begin in the UK in 2018. AGI-134 modifies the surface of the tumour cells, and educates the body’s own immune cells to recognise the cancer. By injecting AGI134 into a primary tumor, the body learns how to recognise its own cancer and can then destroy the distant secondary tumors.

The work has the potential to earn US$31 million in milestone payments, and annual royalties are expected to be in the many millions per annum, showing the potential lucrative nature of the technology in just one application.

So far Kode™ Technology has been used in other products, including blood group diagnostics and advanced tools for researchers. With more than 14 national and international collaborations, as well as employment opportunities in the parent company and its three subsidiaries, and training of PhD students in the AUT Centre for Kode Technology Innovation, Kode™ Technology is already having a positive impact in the NZ Biotech sector. 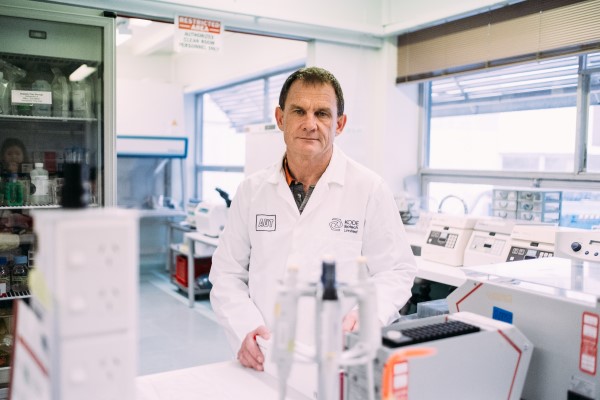 Kode™ Technology is protected by an extensive IP portfolio with over 27 patent families and more than 150 patents.

Professor Henry’s research team in the AUT Centre for Kode Technology Innovation continues an active research program together with international collaborators. Products under development include:

“These are a few of the many different things the technology can do,” says Professor Henry, who is hopeful of a wide application of the technology throughout the world.

The medal selection committee noted Professor Henry’s objective to build annual royalties from Kode™ Technology to multi-million dollar revenues per annum, saying that the technology has the potential to return significant commercial returns for New Zealand.

Professor Henry as CEO led Kode Biotech to win the Supreme New Zealand Innovator and best Innovation in Health and Science at the 2015 New Zealand Innovators Awards. He also received the Vice Chancellor’s Academic Excellence Award for Knowledge Transfer and/or Commercialisation of Research from Auckland University of Technology in 2014 and was awarded the 2011 R.J. Scott Medal engineering science and technology award from Royal Society Te Apārangi. He was a finalist in the 2008 New Zealand Ernst and Young Entrepreneur of the Year.

For excellence and innovation in the practical application of technology leading to significant recognition and influence both in New Zealand and overseas.

To Stephen Micheal Henry for his work in developing a ‘versatile surface modification technology’.